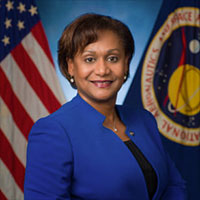 Vanessa E. Wyche is deputy director of NASA’s Johnson Space Center (JSC), an organization of nearly 10,000 civil service and contractor employees in Houston and White Sands Test Facility in Las Cruces, New Mexico. She assists with leadership of a broad range of human spaceflight activities, including NASA’s astronauts, Mission Control, development and operation of human spacecraft in low-Earth orbit and plans for human missions to the Moon and Mars.

Prior to her position as deputy director, Wyche served as the director of the Exploration Integration and Science Directorate at JSC where she provided executive guidance and direction of a multi-disciplined organization to enable human and robotic exploration of deep space. Wyche previously served as acting deputy director of JSC from September 2017 to February 2018.

A native of South Carolina, Vanessa earned a Bachelor of Science in Engineering and Master of Science in Bioengineering from Clemson University. Before joining JSC in 1989, she worked for the Food and Drug Administration in Washington D.C. Throughout the span of her career with NASA, she has held several other distinguished leadership positions including: assistant director of JSC; flight manager of several missions of the retired Space Shuttle Program, executive officer in the Office of the NASA Administrator and led center-level technical and program organizations.

A strong supporter of Innovation and Inclusion (I&I) at JSC, Wyche has served as a member of JSC’s I&amp;I Council and co-executive sponsor of “Emerge,” an employee resource group for early career employees. She advocates mentoring and is a passionate promoter of science, technology, engineering and math (STEM). Wyche serves on multiple boards, including chair of Space Center Houston, and advisory board member of Houston Exponential, SpaceCom and the NASA College Scholarship Foundation.

She has received numerous honors from NASA, notably, two Outstanding Leadership Medals, two Achievement Medals, and is a 2014 Women at NASA awardee. She has been recognized externally as a national “2016 Women Worth Watching” honoree by Profiles in Diversity Journal, a 2017 “Inspiring Woman from South Carolina” by Coastal Carolina University, and was inducted into the Thomas Green Clemson Academy of Engineers and Scientists at Clemson University in 2019.