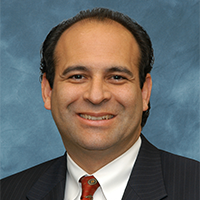 Chris recently retired from a 42-year career in aerospace and defense. His last position was with Northrop Grumman where he led the Research, Technology, and Engineering organization for their Aerospace Systems Sector.

He had served in many capacities over his career including, Chief Engineer for the B2 Bomber, Chief technology Officer, General Manager of the Unmanned Systems Business and Program management of a variety of programs including fighters, bombers, weapons, radars and ISR platforms.

Prior to Northrop Grumman he worked for Rockwell International on the NASA Space shuttle program and advanced launch vehicle concepts.

Hernandez earned a bachelor’s degree in electrical engineering from California State University, Long Beach and a master’s degree in management from the Massachusetts Institute of Technology.

He is a current member and former chair of the CSULB Engineering Dean’s Advisory Council and an active member and former chairman of the Aerospace Industries Association Technical Operations Council. He is also presently on the executive Steering Committee for AIAA Aviation Conference. Since 2001, He has served on the board of directors of the Mexican American Opportunity Foundation one of the largest nonprofit social services organization in the U.S. Lastly, he is the president of “Christopher’s Way”, named after his oldest son, a nonprofit chartered to bring awareness to a learning disability called Dysgraphia.