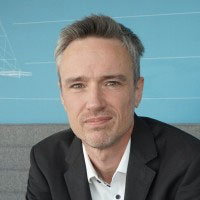 Ludovic Aron is the European Union Aviation Safety Agency (EASA) representative in the United States of America, based in Washington D.C., with the title of a Diplomatic Counsellor. His mission is to enhance the cooperation between the European Union (EU) and the United States of America, and more particularly between EASA and the Federal Aviation Administration (FAA), on all matters related to aviation safety and sustainability.

Ludovic has over 20 years of experience in aircraft design engineering and certification. After his military service in the French Navy, Ludovic Aron joined Dassault-Aviation, working as an aircraft systems engineer, first in the Military Customer Support division (on the Rafale Fighter program and on the military drones program) and then in the Business Jets division. He held several positions before being appointed Technical Program Manager for the legacy Dassault Falcon 10, 20 and 50 series and for the new Falcon 900LX program development.

After 10 years in Dassault-Aviation, eager to take up a new challenge, Ludovic then joined a brand-new French airplane maker, Sky Aircraft (GECI Aviation Group), as Head of Aircraft Systems and member of the Program Steering Committee for the design, development, and production of a new commuter category turbo-propeller aircraft.

In 2013, Ludovic came to the European Union Aviation Safety Agency (EASA) and soon after he was appointed Head of the Business Aeroplanes Certification. Thereafter he became Head of the Large Aeroplanes Certification, managing a department of 80 technical experts and project managers in charge of the European certification of the most modern airliners (A320neo series, A330neo, A350-1000, B737 Max, B787-10, Embraer E2 Jets). He held this position for about 5 years and was namely responsible for the return to service of the B737 Max in Europe after its worldwide grounding in March 2019.

Ludovic Aron holds a master’s degree in aeronautical and aerospace engineering, with a focus on Space-based Telecommunications, that he obtained after studying both at the Institut Supérieur de l’Aéronautique et de l’Espace - ISAE-SUPAERO (Toulouse, France) and at the Technische Universität München - TUM (Munich, Germany).