Click Here to view a video of a time-lapse movie from a Russian weather satellite showing four days of pictures in a few minutes.

The satellite was placed in a geostationary orbit; this means that it orbits the earth once every 24 hrs, always staying above the same point on the earth's surface as the earth turns under it. You can see day and night sweep across the earth as the video progresses; it shows first the Northern Hemisphere, then the Southern Hemisphere, and finally the whole earth.

I invite you to take a globe and point out the continents and large islands that you can see on both the globe and the video. (It is very easy to find India, Sri Lanka, the Arabian Peninsula, the Horn of Africa, Indochina, and the Philippines. You can also see the Himalaya Mountains, the Arabian Desert, and the Sahara Desert. In the Southern Hemisphere you can see Australia and the southern part of Africa.)

If you have a bright light that you can use to illustrate day and night, use it and show how, if one's viewpoint moves around with the earth (as the satellite's does), the line between day and night (it's called the "terminator") sweeps across the globe under you.

In addition to the Grades K-2 activity, I invite you to note that the video was taken over four days in May. This is during the Northern Hemisphere's springtime and the Southern Hemisphere's autumn. At this time, the sun is north of the equator. (This is a great lead-in to what causes the seasons.) Because the sun is north of the equator, when the video is showing nighttime on the satellite's side of the earth, a fringe of light is seen over the North Pole while the South Pole is completely dark.

The weather satellite was placed in a geostationary orbit, in which it stays in the same position relative to the earth at all times. This differs from a geosynchronous orbit, in which a satellite orbits the earth exactly once every day. A geosynchronous orbit may be elliptical, in which case the satellite will move more quickly at some times of day and will move more slowly at other times of day; all that matters is that it complete one orbit in one day. A geosynchronous orbit may also be inclined relative to the earth's equator, so that it spends part of its orbit above the Northern Hemisphere and part of its orbit above the Southern Hemisphere. A geostationary satellite, on the other hand, must be in a circular orbit so that its speed is fixed, and it must be in an orbit directly above the equator so that it does not move north or south. The radius of a geostationary orbit from the center of the earth is about 26,000 miles, or about 3.3 times the diameter of the earth. (The satellite will thus be about 2.8 diameters above the surface of the earth.) If you have a globe, you can hold it up and indicate with your finger about where the satellite will be in space.

You may also want to point out more detailed geographical features: the Sinai Peninsula, the Mediterranean Sea, the Red Sea, and Madagascar in the south.

If I may expand on the previous grades' notes on the reflection of the sun off the oceans, one can draw a diagram looking "down" over the North Pole: 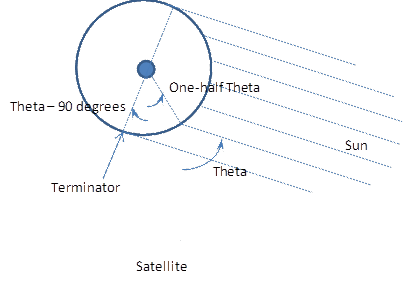 From the dates in May on which the video was taken, one can determine the latitude of the sun north of the equator. (Take the number of days since March 21, divide by 365 and multiply by 360 degrees, take the sine, and multiply by the 23.5 degrees of latitude of the Tropics of Cancer and Capricorn. May 17 is 74 days after March 21, meaning that the sun has moved about 73 degrees from the Vernal Equinox, making it about 22.5 degrees north of the equator.) Subtracting off the 8.7 degrees that the satellite’s view lacks from being a full hemisphere means that at night-time the top 14 degrees or so of the visible earth is still sunlit.