Parallax and the Size of the Solar System

How do scientists measure astronomical distances? We cannot stretch a tape measure from the earth to another planet. Before the space program started, astronomers used indirect methods to calculate the size of the solar system.

One of the methods astronomers use to measure a distance indirectly is called “parallax.” You can illustrate parallax very easily by holding up your finger in front of a distant object and closing one eye at a time. As you look through your left and right eyes alternately, your finger appears to jump back and forth in front of the object. If you move your finger closer to your eyes or farther away from your eyes, the size of the jump appears to get wider or narrower. (Your finger also appears to be larger or smaller, but that is a different effect.)

One can make a slightly more concrete version of the Grades K-2 demonstration of parallax by setting something up a few feet in front of a distinctive background and asking students to draw what they see from their directions. Students in different parts of the classroom can then compare their drawings. There are two points to remember.

First, the things to be drawn should be both simple and distinctive, keeping in mind the artistic ability of the age group. For example, it would be easy to set up a row of pieces of differently-colored construction paper on a wall and a box on the teacher’s desk. The students could then draw the row of colored rectangles and mark which one the box is in front of. You would get something like this: 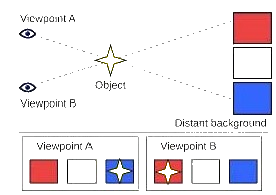 Different students would make drawings resembling the lower “Viewpoint A” and “Viewpoint B” pictures—although you could make a row of half a dozen different colors—and you could the make a top view diagram of the entire classroom showing where each student sits. It would look something like this: 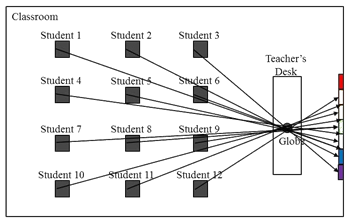 This diagram illustrates the second point: parallax is not a zero-one proposition. Viewpoints between the ones on the ends will still show parallax, just not as much of it. In the picture, Students 6 and 9 will show the globe in front of cards between the purple and orange cards seen by Students 3 and 12.

A fairly simple demonstration of using parallax to make an actual measurement involves holding a protractor horizontally to one’s eye and looking along a straight edge at something. (If the students have ever made a theodolite, this could also be used. Set up a table on one side of the classroom opposite the windows and place the protractor towards one end of the table. Line up the zero-degree direction of the protractor with some distant object outside the window in the distance. You may want to use some tape to hold the protractor in place. Pick an object in the classroom next to the window—the edge of the window itself will suffice—and use the straight-edge to figure the angle between the distant object and the object being measured.

Now on the board or a piece of paper draw a diagram of the situation. It will look something like this: 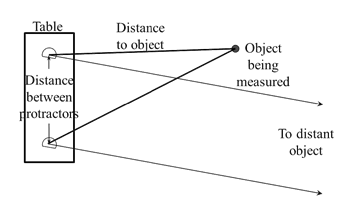 You can use a tape measure to confirm that your calculation is correct.

This provides a handy side lesson in why it is useful to know about triangles and their measurements.

If you carry out this experiment, you will find that you do not get the exact distance to the object. There are several possible sources of error.

If you do not draw the diagram carefully or measure the distances off it carefully, your final answer will be off. While one can be careful in drawing and measuring, there is still a limit to how accurate one’s measurements can be.

When you get farther along in mathematics, you can use trigonometry to calculate the answer instead of reading it off a diagram.

The first step in calculating astronomical distances is to figure out the size of the earth. Contrary to some urban legends, the ancient Greeks and Romans knew that the earth was round; Eratosthenes calculated the diameter of the earth quite accurately in the third century BC. Ptolemy’s Almagest, which was the standard astronomical textbook in the Middle Ages, devotes a short chapter to explaining that the earth is round and another chapter to explaining that its size is that of a mathematical point compared to the distances to the fixed stars. The scene of Christopher Columbus arguing with university professors that the earth is round was invented by Washington Irving in the 1800s.

There are several ways to measure the size of the solar system. The first is to use the parallax method to calculate the distance from the earth to the sun. This was done by timing the transits of Mercury and Venus across the face of the sun from different parts of the world and using geometry to figure out the distance. James Cook made an epic voyage to Tahiti in 1769 for the express purpose of observing the transit of Venus.

A second method is to time the eclipses of the moons of Jupiter or other very regularly-occurring astronomical events. When the earth and Jupiter are on the same side of the sun, the light from the eclipses takes a certain amount of time to reach the earth. When the earth is on the other side of the sun from Jupiter, the light must travel farther, across the earth’s orbit, and takes that much longer to reach the earth. Measuring the difference in time and multiplying by the speed of light gives the diameter of the earth’s orbit. (When this was done for the first time, by Ole Roemer in 1676, there were better estimates for the size of the earth’s orbit and the method was used to calculate the speed of light.)

As radar systems became powerful enough in the middle of the twentieth century, astronomers beamed radar waves to the planet Venus and timed how long it took them to travel to that planet and back again. That, coupled with the knowledge of the speed of light (which was much more precisely known by then), allowed a more direct measurement of the distance from the earth to Venus.

With the advent of the Space Age, we have now sent spacecraft to other planets. Successfully navigating a spacecraft to another planet requires precise knowledge of the distance to that planet and confirms the measurements made by other means.

June 20, 1956: NACA (the predecessor to NASA) completed the first flight test of the Cajun sounding rocket.