A mysterious object (WT1190F) -- about six feet across -- was predicted to enter the atmosphere and burn up on Friday, November 13, 2015. When this lesson was originally written, little was known about the object that entered the atmosphere. It had been detected by powerful telescopes a few times, but no one knew what it was. This lesson challenges students to investigate unknown objects as they enter the earth’s atmosphere while summarizing data to support scientific solutions.

K-PS2-1. Plan and conduct an investigation to compare the effects of different strengths or different directions of pushes and pulls on the motion of an object.

WT1190F was a piece of space debris.  That means that it was a piece of garbage orbiting high above Earth.  Astronomers discovered it and predicted its fall into Earth’s atmosphere, and teams were able to observe it as it neared the Earth and fell toward the ocean.

Where does space debris come from?  Astronauts leave debris in space when they go on missions because gravity there will not pull things down to a convenient floor for them to sweep.  One astronaut lost a tool bag outside the Space Station in 2008 when it drifted away from her.  Also, old rocket parts, supplies, and old equipment can all end up as space debris.  That debris orbits earth along with satellites, space stations, astronauts, rockets, the moon, rocks, and other things.

Ask students to contemplate this scenario: “Imagine if every piece of trash you had ever seen was never picked up, but just piled around your house.  Can you picture in your mind how big a mess it would be?  And think about the danger if someone tripped over a piece of the trash or cut themselves on something sharp.”  The danger with space debris is that it could smash into a rocket, satellite, or even the space station and cause damage.  Or it might fall to earth and land on something or someone.  The bigger it is, the more damage it could do.  That is why NASA and other groups try to track the debris and study it.

Here is an artist’s depiction of what the debris looks like around the planet. 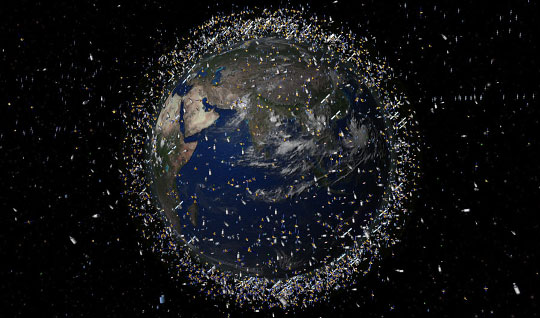 3-PS2-1. Plan and conduct an investigation to provide evidence of the effects of balanced and unbalanced forces on the motion of an object.

The reason things in orbit stay in orbit for so long is that there is essentially no air to slow them down with drag.  In the case of WT1190F, the main reason it fell to Earth was that its orbit was extremely elliptical, with its perigee at an altitude of about 9,200 miles above the surface of the earth while its apogee was at an altitude of more than 400,000 miles, or almost twice the distance to the moon.  The gravity of the moon changed its orbit over the years so that instead of pointing around the earth it was pointing towards the earth.  However, things hit the earth all the time – old spacecraft, meteors, and other space items.

What happens when things hit the earth?  Our thick atmosphere protects us as most things burn up before they can hit the ground. That is what happened with WT1190F. A team on an aircraft tracking the debris was able to record video of the object breaking up as it entered the atmosphere.

How can we know if something will hit Earth? Many professional and amateur astronomers all over the world use sophisticated telescopes to keep track of space objects near Earth. NASA has a large catalog of Near-Earth Objects which it tracks.

MS-PS2-2. Plan an investigation to provide evidence that the change in an object’s motion depends on the sum of the forces on the object and the mass of the object.

Astronomers using a large telescope in the Arizona desert found WT1190F and were able to identify WT1190F on photographs taken before the object was identified. 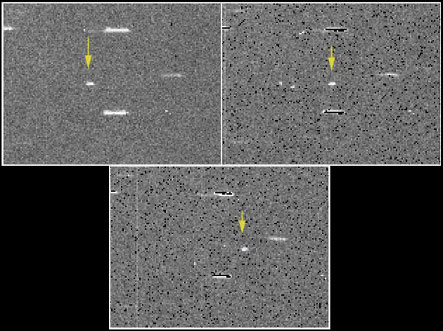 How is this possible?  Astronomers use telescopes to look for things in space.  When a telescope detects something, the astronomers can track its path across the sky to figure out how it is orbiting Earth.  Once they figure out the orbit, they can calculate its track backwards to earlier times when they were photographing parts of the sky where the thing may have been in the past.

The European Space Agency has a video animation showing how crowded the space around Earth is with orbital debris.  It begins by showing objects larger than 1 meter in size, then gradually adds objects of smaller sizes until reaching a size of anything larger than a millimeter.  Obviously, the screen becomes more cluttered with the addition of each new range of objects.  The final view of Earth shows the planet at the center of a hazy cloud.

Here are some links for further reading:

HS-PS2-1. Analyze data to support the claim that Newton’s second law of motion describes the mathematical relationship among the net force on a macroscopic object, its mass, and its acceleration.
How do astronomers know what they do about WT1190F?  They observed it with telescopes.  But the best ground-based telescope can only resolve angles to about one arc-second (meaning that it sees objects closer than that as a single object). This means that at a distance of 13,200 miles (WT1190F’s perigee—measured from the center of the earth) a ground-based telescope cannot distinguish anything smaller than about 300-350 feet.  So, the object appears only as a dot.  (They did not use precious Hubble time on this.)

The object’s position, velocity, and orbit can be measured and calculated with great precision.  So can the apparent brightness.  The apparent brightness of something depends on how far away it is (which is known very precisely), the amount of light it receives (also known very precisely), its reflectivity (which is guessed at), and the surface area that is reflecting the light.  In this way, scientists can estimate the surface area of one side of the object, and from that they estimate the object’s size.

The mass of very light objects in space can be estimated by observing their orbits at widely separated times.  The sun’s light exerts a very slight pressure on the object and over much time, this pressure will push the object away from the orbit it would have purely from gravitational effects.  Astronomers can measure the change in orbit, calculate the pressure exerted by the light, and from that estimate the object’s mass.

Astronomers were able to estimate the density of WT1190F as being about 0.1 grams per cubic centimeter, which is one tenth the density of water.  The density is the mass divided by the volume.

Why was WT1190F so lightweight (i.e. not dense)?  What could it have been?  It was almost certainly a discarded rocket stage – a big hollow metal cylinder that used to be filled with rocket fuel.  But they are not sure; shortly after its discovery there was talk of it being a solar panel that was face-on.  A solar panel is flat, though, and would be expected to turn edge-on at some time during its orbit.  When this did not happen, astronomers turned more toward the theory that it was a discarded rocket stage.

The orbital period of WT1190F was 22 days and 16 hours.  This means that between its recovery (meaning its rediscovery, since it had been seen before) on October 3, 2015 and its destruction on November 13, it would have gone around the earth about twice. (It would make sense for it to have been discovered near perigee as it was so much brighter at that time.)

May 15, 1960, : The first prototype of the Soviet Vostok spacecraft reached orbit.