On Tuesday, March 2, 2004, the European Space Agency launched the Rosetta mission towards the Comet 67P/Churyumov-Gerasimenko.  Ten and a half years later, it reached its destination, going into orbit around the comet.  The Rosetta mission also carried a smaller spacecraft called Philae, which landed on the comet.  After two years in orbit around the comet, the Rosetta spacecraft will crash-land on September 30, 2016.

The ESA web site has four short animated videos describing the spacecraft’s approach to the comet and its two years in orbit.  You will notice that the video depicts the Rosetta satellite and Philae lander as animated characters with human expressions and emotions.  A class discussion on the actual appearance of the equipment (here are pictures of Philae being attached to Rosetta, control team posed in front of Rosetta with solar panels attached, artist's rendering) may be helpful.  With older students in this grade band, you may even wish to talk about why the video shows Rosetta and Philae acting like humans.

One of the videos also mentions other satellites in the “family” of Rosetta and Philae, specifically naming Giotto.  For those classes that show interest in learning more, there are images such as Giotto during testing and information like the overview of Giotto mission .

The ESA website also has Rosetta lesson plans for teachers and students to use in exploring our solar system.  The first is called Our Solar System - Journey to Other Celestial Objects.  There are handouts for students to practice naming and coloring the planets, doing some basic research about the planets, and a card game to work on putting the planets and other objects (like asteroids and comets), in correct order.  A second lesson deals with the history of the universe.  Students work to create a timeline of how galaxies and solar systems are formed.  The third is a great way to integrate art into STEM by asking students to Pixel Your Space - Geometry Behind Science and Art Images.  This may be especially exciting to students since it uses the improvement in video game graphics as a way to introduce the concept of pixels and how high resolution satellite images are made.

When launching a spacecraft toward a rendezvous with an object in space (as opposed to a fly-by), it is not enough simply to get the spacecraft there.  The spacecraft must also match the velocity—speed and direction—of its target object.  This complicates things greatly.  While one could, in theory, send a spacecraft directly from the Earth to the destination comet, this would require a lot of fuel first to get the spacecraft there and then to adjust its velocity to match that of the comet.  The spacecraft would need to carry the extra fuel, which would itself require more fuel to launch it from the Earth, and the result would be something so large and expensive that nobody could afford to launch it.

Instead, the Rosetta mission followed a long, looping path around the Sun from the Earth toward Comet 67P/Churyumov-Gerasimenko.  You can see at the beginning of the animation that it was actually launched toward the Sun on a path that took it “down” inside of the Earth’s orbit.  It then caught up with the Earth again on March 4, 2005, when it used the Earth’s gravity to give itself a boost and move its orbit farther from the Sun.  (Nothing comes for free; the Earth’s orbit moved closer to the Sun by a minuscule amount.)  Similar “gravity assists” at Mars on February 25, 2007 and the Earth on November 13, 2007 (when it was briefly mistaken for a near-earth asteroid) and November 12, 2009 set the Rosetta spacecraft on a course to catch up with its target comet on August 6, 2014.  (Unfortunately the geometry of the animation is such that Rosetta and the comet are not on the screen at the time of rendezvous.)  Rosetta went into orbit around the comet and has moved around the Sun with the comet ever since.

While the animation does not show it, the Rosetta spacecraft also flew past two asteroids while on its way to the comet.  It passed the asteroid “ 2867 Steins” on September 5, 2008 and the asteroid “ 21 Lutetia” on July 10, 2010.  (The numbers in the asteroid names indicate the order in which they were discovered.)

Because the animation was made before the mission controllers decided to crash the spacecraft onto the comet on September 30, the animation shows the orbits through the end of 2016.

Rosetta’s crash-landing on Comet 67P/Churyumov-Gerasimenko is going to be quite different from what we think of when somebody says “crash landing.”  The comet is much smaller than the Earth and has much less mass. It is about five kilometers (three miles) across, although its “rubber ducky” shape makes this less meaningful than usual. Its mass is about 1013 kilograms (2.2×1013 pounds, or 6.8×1011 slugs).  If an object were in a circular orbit at a distance of three kilometers from the center (half the distance across, plus a bit of margin), the centrifugal force will exactly balance the gravitational attraction. (Put another way, the gravitational attraction will be the centripetal force that keeps the object in orbit.)Newton’s Law of Universal Gravitation states that the gravitational force “F” on an object with mass “m” is given by the formula:

where “V” is the speed of the object.  Equating the two forces gives

Solving for the speed “V” gives this formula:

We can calculate the orbital speed as 0.47 m/s, or about one and a half feet per second.  You can hold your hands three feet apart and bring them together over an interval of two seconds to demonstrate this speed.  While this is not going to be the exact speed of the Rosetta spacecraft when it crashes into the comet, it is about right.  The spacecraft is about the size of a small car and the extended solar panels are fairly delicate, so it will definitely have a rough landing, but it will not be smashed into smithereens.

As an exercise of imagination, you may want to show a large picture of Comet 67P/Churyumov-Gerasimenkoand ask the students to visualize the gravity field around it—which way gravity pulls one “down” at different points on the surface or just above it.  With round bodies like the Earth and the Moon, the center of gravity is at the center of the body, but with such an irregular body as the comet has, things are much more complicated. 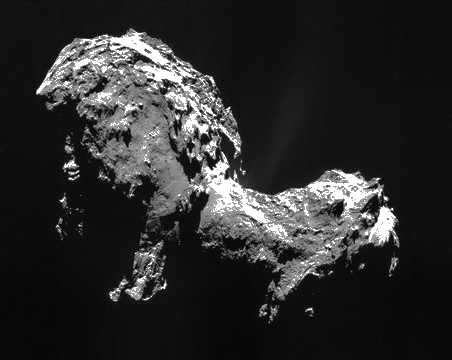 September 20, 1956:  The American Jupiter-C rocket had its first launch, reaching an altitude of 682 miles and flying 3,355 miles downrange.  It carried a payload of sand because its launch team had orders not to launch a satellite.