On Monday, August 21, 2017, the Moon passed directly between the Earth and the Sun.  This solar eclipse was visible from the continental United States; the last total solar eclipse visible from this part of the world happened over forty years ago.  Such a rare and spectacular event warranted the effort to go and see.  It takes some time to prepare to view a solar eclipse safely.

NGSS: Earth’s Place in the Universe: Use observations of the sun, moon, and stars to describe patterns that can be predicted. 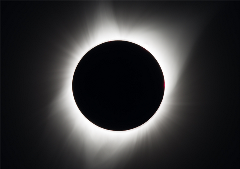 What is a solar eclipse?  That is what we call it when the moon passes between the Earth and the sun, causing a shadow to fall on the Earth.  The eclipse is experienced in certain locations, but not by everyone on Earth at once.  There are three different types of eclipse that depend on where you are and what you see at the time of the eclipse.  If it looks like the sun has completely disappeared from sight, you are seeing a “total eclipse.”  Or, you might see the sun around the edges of the moon in an “annular eclipse.”  The last possibility is that only part of the sun will be blocked from view, and that is called a “partial eclipse.”

Even though the sun seems to disappear, you should not look directly at the eclipse.  Your eyes can still be damaged by the rays from the sun.  If you want to watch the eclipse, then you will do well to wear special viewing glasses or to use a regular solar filter.  Since being able to see an eclipse and how much of an eclipse depends on where you will be, it is also a good idea to check a map of the path of the eclipse to see when and where the best viewing will be.

The Public Broadcasting System website has a video animation of a solar eclipse(registration required).  Here is another animation from NASA’s Goddard Space Flight Center.

NGSS: Earth’s Place in the Universe: Represent data in graphical displays to reveal patterns of daily changes in length and direction of shadows, day and night, and the seasonal appearance of some stars in the night sky.

An eclipse seems to turn day into night because the moon’s shadow falls on us and the moon blocks our view of the sun itself.  The moon’s shadow is called the umbra in the area where the moon completely blocks the sun.  We call the shadow the antumbra when we cannot see the center of the sun, but can see its outline around the moon shadow; this only happens in an annular eclipse (which the August 21 eclipse is not).  And when the moon only covers part of the sun, we call that area of the shadow the penumbra.  You may check an eclipse viewing map to see if your location will be within the umbra or penumbra during the August eclipse.

If you are lucky enough to live in an area that will experience the eclipse, you will probably want to view it with special glasses to protect your eyes.  Many people will probably be ordering these glasses, so don’t wait until the last minute to get your own pair.  Besides special viewing glasses, you can also build an eclipse viewer.  These viewers are a type of pinhole camera that projects an image of the sun for you to see.  To learn how to make your own viewer, check out the directions on National Geographic’s website.

Suggested Activity:  Build an eclipse model.  This will take most of a class period.

NGSS: Earth’s Place in the Universe: Develop and use a model of the Earth-sun-moon system to describe the cyclic patterns of lunar phases, eclipses of the sun and moon, and seasons.

The geometry of lunar and solar eclipses is described by the Saros cycle.  One lunar month is the time required for the Moon to travel around the Earth, but as one gets into the details of the definition there are at least three different lunar months:

None of these is exactly equal to the amount of time it takes for the Moon to travel 360 degrees in its orbit around the Earth, which is called a Sidereal Month and is 27.321661 days.  The synodic month is two days longer than a sidereal month because as the Moon travels around the Earth, the Earth travels around the Sun and it takes an extra two days for the Moon to “catch up” with the Earth’s motion around the Sun to form a new moon phase.  The anomalistic month and draconic month differ from the sidereal month because the Moon’s orbit around the Earth is not constant; it precesses in two different ways.  The plane of the Moon’s orbit precesses in one direction, causing the difference in the draconic month, and the position of perigee precesses in the other direction, causing the difference in the anomalistic month.

The extra eight hours in a Saros cycle mean that the matching eclipses will happen at different times of the day.  For a lunar eclipse, where everybody on the nighttime side of the Earth can watch the Moon pass through the Earth’s shadow, this does not make much of a difference.  For a solar eclipse, however, it means that the Moon’s shadow will pass over a completely different part of the Earth on successive matching eclipses.

NGSS: Earth’s Place in the Universe: Use mathematical or computational representations to predict the motion of orbiting objects in the solar system.

An intrinsic partial eclipse, as distinct from a total or annular eclipse which is seen as a partial eclipse, happens only when the path of totality misses the Earth, passing either “above” the North Pole or “below” the South Pole (as seen looking at a globe).  In this case the Earth, Moon, and Sun do not line up perfectly.

An annular eclipse takes place when the Moon’s apparent size is less than the Sun’s apparent size as seen from the surface of the Earth.  This happens when the Moon is at the point in its orbit where it is farthest from the Earth.  In this case, on the narrow strip on the Earth where one would experience a total eclipse, instead one sees the Sun as a thin ring (or “annulus,” which is where the name comes from) around the dark Moon.

One can calculate and compare the apparent sizes of the Moon and Sun with a little elementary mathematics and astronomy.  Here are the relevant quantities:

We can do the same thing for the Sun, dividing 1,392,000 Km by the average distance to the Sun (149,600,000 Km) to get an average apparent diameter of 0.00930 radians or 0.533 degrees. It is the fact that the apparent sizes of the Sun and Moon are so similar (0.518 to 0.527 degrees versus 0.533 degrees) that makes the path of totality such a narrow strip on the surface of the Earth. The apparent size of the Sun being ever-so-slightly larger makes annular eclipses more common than total eclipses.

A hybrid eclipse happens when the Moon is just far enough from the Earth for the Earth’s radius to make the difference between an annular and a total eclipse.  For example, if the Earth is at aphelion and the apparent size of the Sun in the sky is 0.525 degrees, consider the case in which the Moon is 381,000 Km away from the Earth.  When the Moon is on the horizon, and the solar eclipse is happening at sunrise or sunset, the Moon’s apparent size in the sky will be 0.00912 radians or 0.522 degrees.  This is less than the apparent size of the Sun, making for an annular eclipse.  If the eclipse passes near the equator at noon, we must subtract off the radius of the Earth to get the distance to the Moon and so the Moon’s apparent size increases to 0.00927 radians or 0.531 degrees.  This is larger than the Sun’s apparent size of 0.525 degrees, causing the eclipse to be total at this point.  That the Moon has to be in about the right place in its orbit as well as lined up directly between the Earth and the Sun makes hybrid eclipses quite rare.

June 9:  The Soviets attempted to launch a second R-7 rocket but its engine failed to start.  After three failed attempts in as many days, the rocket was removed from the pad.  An inspection revealed that a valve was installed backwards.

June 11:  The first attempt to launch an American Atlas rocket ended in failure when the rocket exploded shortly after liftoff.