Everybody knows that the Sun rises in the east and sets in the west. But when you look at it more closely, it’s not that simple. This lesson explores some of the complications that are there if you look for them.

NGSS: Earth’s Place in the Universe: Make observations at different times of year to relate the amount of daylight to the time of year.

The Sun rises in the east and sets in the west. But except for two days a year, it does not rise exactly in the east or set exactly in the west. During the spring and summer (as the seasons are defined in the United States) the Sun rises on the north side of east and sets on the north side of west; during the fall and winter (again as defined in the United States) it rises and sets toward the south.  (The caveats about the definitions of the seasons are necessary; apart from the Southern Hemisphere having its seasons reversed from those in the Northern Hemisphere, the British define a “meteorological summer” that begins on June 1 and celebrate Midsummer Day on June 21.)

Suggested Activity: Go outside and find a handy object like a flagpole or the corner of a building that casts a shadow.  Once a week, at exactly the same time of day, go out and mark where the shadow of the object falls on the ground. The marking should be done at the same time each day; while doing it on the same day each week would be good, it is not necessary. Notice how, over the weeks, the place where the shadow falls moves toward the south; this is caused by the Sun moving farther north as the spring progresses toward summer. If the time of day when you do this is around noon, you can also note the position of the Sun in the sky as being more-or-less directly south rather than being straight overhead. (Note that teachers in the tropics and the Southern Hemisphere will need to adjust this.)

NGSS: Earth’s Place in the Universe: Represent data in graphical displays to reveal patterns of daily changes in length and direction of shadows, day and night, and the seasonal appearance of some stars in the night sky. 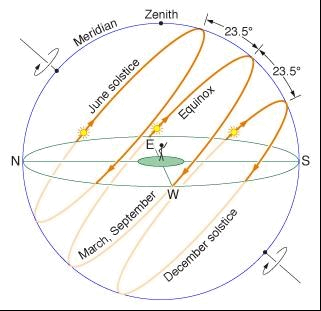 We also think of the Sun being directly overhead (or at the zenith) at noon, in the middle of the day. Outside of the tropics, this does not happen; at any given position in the United States, at noon the Sun is south of the zenith. You can draw a diagram like the one below (from Daniel V. Schroeder’s web page) to show the path of the Sun through the sky on any given day. In this diagram, you are the stick figure at the center; the horizontal circle around you is your horizon. The thick colored circles are the path of the Sun through the sky during the day; the lighter remainders of the circles are the path of the Sun during the night, when it is below the horizon and you cannot see it.

In the diagram, the angle between the horizon and the Earth’s axis (the diagonal line coming out at the upper left and lower right) is the person’s latitude. The diagram here shows a latitude of about 40 north. The circles that show the Sun’s path are perpendicular to this line. You can redraw the diagram with the Earth’s axis at different angles to show the apparent motion of the Sun in the sky at different latitudes. At the Equator, for example the Earth’s axis passes through the horizontal N-S line and the circles giving the Sun’s motion are vertical. In this case the Sun passes directly overhead (through the zenith) at noon on the March and September Equinoxes, passes north of the zenith during the Northern Hemisphere’s summer, and passes south of the zenith during the Southern Hemisphere’s summer. At the North Pole, the Earth’s axis is vertical and the circles showing the Sun’s motion are horizontal; this illustrates the “midnight sun” seen in the polar regions during the summer.

During the spring, the days also get longer. This is a result of the Sun rising and setting toward the north (in the Northern Hemisphere). In the diagram, the Sun travels once around a circle in a single twenty-four-hour day. In June, more of the circle is above the horizon than at other times of the year; thus the daylight portion of the twenty-four-hour day is longer.  At the equinox, half the circle is above the horizon and half is below the horizon; thus the daylight and night-time portions are the equal. (This is how we get the word “equinox.”)

NGSS: Earth’s Place in the Universe: Develop and use a model of the Earth-sun-moon system to describe the cyclic patterns of lunar phases, eclipses of the sun and moon, and seasons.

The Sun rises in the east and sets in the west. At least, that is how we speak of it—and often how we think of it.  In fact, the apparent motion of the Sun in the sky is a result of the motions of the Earth: the Earth’s daily rotation on its axis and its annual revolution around the Sun.

The illustration of the seasons using a globe (or other spherical object) and a light bulb is so well known that it does not need repeating here. What is not done so often is to put a small doll on the globe and then to rotate the globe around on its axis to show how the doll “sees” the “Sun” move at different times of the year. I recommend having the doll face south when you place it somewhere in the Northern Hemisphere and face north when you place it somewhere in the Southern Hemisphere. With a very little effort, you can reproduce the apparent movements of the Sun shown in the diagram shown in the Grades 3-5 lesson. You can also place the doll at the North (or South) Pole and ask the students to imagine what the motion of the Sun looks like to somebody who is standing on the Pole for a year.  (The Sun will rise slowly around the Spring Equinox, make a circle around the horizon once every 24 hours rising slowly in the sky until the Summer Solstice, and then continue to circle the horizon once every 24 hours as it sinks slowly in the sky, finally setting around the Autumnal Equinox.)

NGSS: Earth’s Place in the Universe: Use mathematical or computational representations to predict the motion of orbiting objects in the solar system.

At the equinoxes, the lengths of the day and night are the same. Well, almost the same. Like pretty much everything in science, this is an approximation, a simplification. Science can be as simple or as complicated as you like—and are willing to put up with the errors caused by the approximation.

As a first complication, the Sun is not a mathematical point; its apparent diameter in the sky is about half a degree. Because the Earth rotates 360 degrees in about 24 hours (and this is itself a simplification), it takes about two minutes for it to rotate the half-degree of the Sun’s diameter. This means that at the Equator, it takes about two minutes for the entire disk of the Sun to come up over the horizon. At a latitude of 60 degrees north, where the apparent path of the Sun is only 30 degrees from the horizontal, it takes four minutes for the entire Sun to rise because it is moving upward at the 30-degree angle rather than moving straight up. The same is true at sunset. Unless one defines “day” and “night” very carefully, the diameter of the Sun can introduce an uncertainty in the length of the day of four minutes or more.

A second complication is that the Earth’s atmosphere refracts light. Refraction, or bending, of light happens when a beam of light moves from a medium where it travels at one speed into a medium where it travels at a different speed. You can see an example of refraction by looking at the handle of a spoon in a glass of water ( or by looking at anything through the side of a glass of water). The Earth’s atmosphere also refracts light; one example of this is the mirage of water on the surface of a distant road on a hot day.  The Sun’s light is refracted as it passes through the atmosphere; this causes the Sun (or any other astronomical body) on the horizon to appear to be about half a degree higher than it really is. On the Equator, this causes sunrise to be about two minutes earlier and sunset to be about two minutes later than they would be if we did not have an atmosphere; again, at 60 degrees north the effect is doubled. This effect also causes the Sun to appear oval, squashed from top to bottom, at sunrise and sunset. It also causes the Sun to appear to slow down as it sets and speed up as it rises; this may be part of the origin of the ancient Greek legend of Eos and Tithonos.

Even the dates of the solstices and equinoxes vary from year to year.  This is a consequence of there not being a whole number of days in a year. If you examine the dates and times of the March Equinox over several years, you will find that the equinox gets about six hours later every year except for a leap year, when it jumps back eighteen hours because of the extra day. The yearly change is not exactly six hours, though; it is about eleven minutes less than that (10.8 minutes, to be more precise). This is caused by the fact that a year is not exactly 365.25 days, reflected in the Gregorian calendar’s handling of leap years on years divisible by 100. This is still not exact, though, and the remaining discrepancies have other explanations which motivated students can look into.

While the December Equinox is the shortest day of the year in the Northern Hemisphere, it is not the date of the latest sunrise or of the earliest sunset. The Earth’s orbit around the Sun is elliptical and the Earth is closest to the Sun in early January and farthest from the Sun in early July. This means that it is moving the fastest in its orbit in early January and as it speeds around the Sun its rotation (which is pretty much at a constant rate) cannot keep up with it.  One result of this is that sunrise and sunset are a fraction of a minute later every morning than it would be if the Earth’s orbit were circular.  Conversely, in July the Earth’s revolution around the Sun lags behind its rotation rate and the sun rises and sets a fraction of a minute earlier each day. 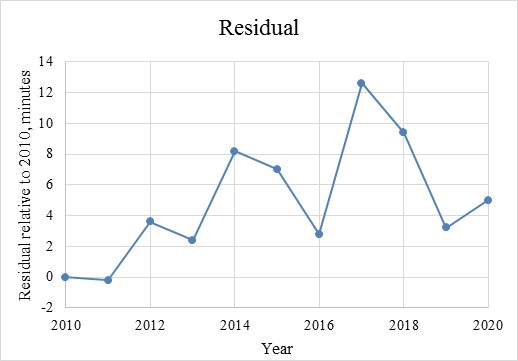 March 17:  The American Vanguard 1 was successfully launched into orbit.  It transmitted until May 1964 and is still in orbit.

March 26: The American Explorer III was successfully launched into orbit.