Few sights in this world are as mysterious as the shimmering lights of the aurora. For those accustomed to solid, material objects that follow predictable paths, the wild and unpredictable movements of the lights in the sky evoke a wonder and awe. This lesson explores the aurora. 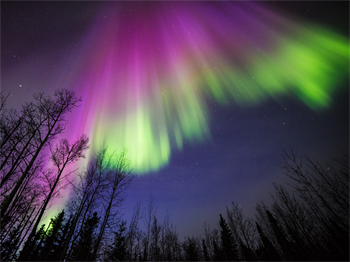 If you live in the far northern part of the Earth, when the night sky is clear you may be able to see moving areas of light when you look up. These glows in the sky, called the “Northern Lights” or “Aurora Borealis” (“aurora” is Latin for “dawn” and “borealis” is Latin for “of the north”), form a large ring, hundreds of miles in diameter, high in the sky around the North Pole. There is another ring, the “Southern Lights” or “Aurora Australis,” around the South Pole. Fewer people live where they can see the Aurora Australis, though, and so the northern version gets more attention.

Like most nighttime displays in nature, the auroras can be easily overwhelmed by artificial lights; one needs to get away from street lights in order to see them well. It often takes some work to see an aurora; one must be in the right place at the right time and be looking in the right direction.

The Northern (and Southern) Lights are caused by the Sun. The Sun sends out not only light and heat, but also extremely small charged particles called “electrons” and “protons.” The Earth’s magnetic field—the thing that makes a compass needle point north-south—pushes these electrons and protons away from the Equator and toward the North and South Poles. The auroras are formed when the electrons and protons hit the upper atmosphere. From space, they look like round curtains of light around the poles.

The Earth is not the only planet that has auroras. Think for a minute about what it takes to make an aurora. First you need to know what causes it; the K-2 lesson explains briefly that the aurora is created by particles from the Sun being pushed by the Earth’s magnetic field toward the North and South Poles. The particles from the Sun come down into the Earth’s atmosphere in rings around the North and South Poles; where the particles hit the atmosphere, they make it glow.

Scientists do not know everything about auroras, though. While we think there need to be the particles from the Sun and the other things for an aurora to form, scientists may have discovered auroras on a “rogue planet” out in deep space which does not go around a star. Like any new discovery, this is tentative and the interpretation may change as scientists get more data.

What does an aurora look like? That depends on the direction from which you are looking at it.  From directly underneath it, the aurora can look like a luminous river flowing through the sky; from a distance, one can see only an indistinct glow. In between, not directly underneath but still fairly close, one can see what look like curtains of light in the upper atmosphere. This also is what astronauts in the Space Station see when they look at the aurora from above.

The aurora can take on several colors as well. Usually it is green, but it can also be blue, yellow, purple, or any of half a dozen other colors. These colors depend on the type of atom or molecule that the particles from the Sun are hitting. Nitrogen atoms create a blue glow while nitrogen molecules (a nitrogen molecule is made of two nitrogen atoms attached to each other) glow purple. Oxygen creates a yellow or green light.

The more elementary grade bands in this lesson describe the Earth’s auroras, what causes them, where else in the Solar System they can be found, and some details as to what they look like. Not every glow in the night sky is an aurora, though. An aurora is caused by particles from the Sun hitting the upper atmosphere and making the atoms and molecules there glow in different colors. Other phenomena cause other glows.

Apart from upper-atmosphere lightning phenomena such as sprites and elves, there is an exceptionally faint glow in the atmosphere all over the Earth that is called, not surprisingly, “airglow.” While it happens around the same place in the atmosphere as the aurora, it is not caused by particles from the Sun; instead, it results from chemical reactions between the various components of the atmosphere at those altitudes.

Airglow is not to be confused with “skyglow,” which is caused mostly by artificial lights such as street lights, billboards, and upward-pointing lights on the ground. The artificial light coming up from the ground reflects off particles in the atmosphere back down toward the ground, causing a glow in the sky that has nothing to do with nature. The artificial skyglow competes with, and usually dominates, all the natural glows and astronomical phenomena in the sky. (Teachers are invited to ask their students how many of them have seen the Milky Way.)

Farther out in the sky, there is a faint glow called the “zodiacal light.” This is actually an astronomical phenomenon, caused by the Sun’s light scattering off interplanetary dust that is more-or-less in the plane of the planetary orbits around the Sun.

Another glow in the sky that resembles the aurora is a curious phenomenon called “Steve.”  This was discovered several years ago by amateur sky-watchers but has only recently been acknowledged by scientists. “Steve,” which was named for a creature in the movie “Over the Hedge” (“Let’s call it ‘Steve,’” says a character in the film), is much rarer than an aurora and happens closer to the Equator than the aurora’s oval. In addition, rather than being shaped like a curtain, it looks more like a ribbon of light in the upper atmosphere.  With the study that Steve (now called “STEVE,” for “Strong Thermal Emission Velocity Enhancement”) is receiving, scientists have started figuring out what it is made of and what causes it.  Contrary to some popular news headlines, it is not strictly an aurora. The new knowledge of Steve is an excellent example of amateurs and professionals working together to advance science. Here is the latest update (as of the time of writing) from Live Science.

September 23, 1958: A Soviet "Luna" spacecraft was launched toward the Moon but catastrophic vibrations tore the rocket apart 93 seconds after liftoff.

September 26, 1958: The American Vanguard SLV3 was launched but did not reach orbit, re-entering over Central Africa.