The Apollo 8 mission might just be the most important 20th-century event you’ve never heard of. Most people alive today don’t know anything about Apollo 8 mission, but some space historians argue that it was one of the most significant events of the last century—or longer.  Apollo 8 marked the first time that any human beings truly “left” Earth.  Human spaceflight started in 1961, but it wasn’t until the launch of Apollo 8 seven years later that astronauts were able to leave the Earth behind and power through the cosmos to a new celestial destination:  the Moon.  Apollo 8 launched from the Kennedy Space Center on December 21, 1968 and reached the Moon three days later.  After orbiting the Moon for about 20 hours, the spacecraft left lunar orbit and returned to Earth.  The mission itself lasted just six days, but the scale of its significance would leave a lasting impact on humanity which persists to this day.

What’s the farthest you’ve ever traveled? To a relative’s house in a different state? To another country? Maybe you’ve even visited another continent. Throughout history, human beings have traveled quite far, traveling across, over, and around the world in ships, airplanes, and even balloons. But in 1968, three astronauts put all of those efforts to shame by traveling farther than any humans had ever gone before. These astronauts—the crew of Apollo 8—went to the Moon.

You’ve probably heard about the first moon landing, when Neil Armstrong and Buzz Aldrin became the first people to set foot somewhere other than Earth.  But before they could successfully accomplish their mission, a lot of other astronauts, engineers, and scientists had to work together as a team to show that it was possible. The crew of Apollo 8 piloted their spacecraft in a path (called an orbit) around the moon before returning to Earth. It might sound silly to go all the way to the Moon without stopping, but NASA needed to prove that it was possible to reach the Moon and return and to find places for the future missions to land.

The mission patch for Apollo 8 shows the Earth and the Moon with a red figure 8 looped around them. The last names of the crew are shown on the lower curve of the number.  Mission patches often use symbols to show the objectives of the crew, what they hope to accomplish on their voyage.  You can see that this patch cleverly uses the number of the mission to show how the crew planned to orbit around the Moon and return to Earth.  (Apollo 8’s orbit around the Moon was retrograde as shown in the patch, orbiting in the opposite direction from the way the Moon rotates.)  Quite a bit different from the usual Christmas ornament, don’t you think? 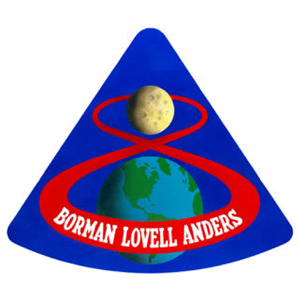 Then these three astronauts—Frank Borman, Jim Lovell, and Bill Anders—launched towards the moon, they became the first people to ever leave planet Earth. When they looked out the windows, they could see our planet—home to every human being who has ever lived—as a blue and white ball, hanging in space. The astronauts made a telecast back to Earth on Christmas Eve. They shared their impressions of seeing Earth from so far away and seeing the moon up close. Commander Frank Borman called the moon “a vast, lonely, forbidding type of existence.” The crew also read a passage from the Bible as a Christmas message “for all the people on Earth.”

What the crew of Apollo 8 saw changed the way they thought of our home planet forever. Thanks to their television broadcast, it also changed the way that people on Earth thought of their planet, as well. Can you imagine seeing the whole Earth all at once, like a life-sized globe?

Apollo 8 was the second crewed mission of the Apollo program. The commander of the mission, Frank Borman and crew member Jim Lovell had already been in space. Borman and Lovell spent almost two weeks in a small spacecraft during the Gemini 7 mission. For the third crew member, Bill Anders, this was his first trip into space; he had been a backup crew member during the Gemini 11 mission but had not flown on the mission itself. The crew was able to meet all of their mission objectives. These objectives including testing out how the crew, the command and service module, and the support facilities would work together. The crew also had to go through many of the steps that would be carried out for a lunar landing–except the landing itself. (The Lunar Module had not been built yet.) NASA could learn more about what worked well and any changes that needed to be made for future missions to land safely on the moon and return home.


One of the systems that performed very well during the mission was the communications equipment. The crew made six telecasts that were transmitted live all around the world.  Two transmissions were made on the way to the moon (translunar coast), two were made while orbiting the moon (lunar orbit), and two were made on the way back to Earth (trans-Earth coast). Everyone was pleased with the excellent quality of the telecasts, as well as with the voice communications throughout the mission. The only time the astronauts were out of touch with the Earth was during the times in which their craft was behind the moon and transmission was blocked by the bulk of the moon. These three astronauts were the first humans to ever see the far side of the moon–which also made them the first to ever see the Earth “rise” from beyond another body in space. 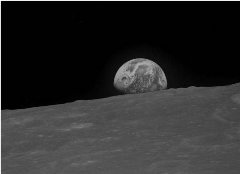 Two of the most profound events of the Apollo 8 mission had nothing to do with science or engineering. One was the crew witnessing, for the first time in human history, the Earth rising behind the edge of another celestial body. They realized just how ground-breaking an event this was and grabbed a camera to photograph it. The first photograph was taken with black-and-white film and then they took a picture with color film.

The photographs they took, called “Earthrise,” became some of the best-known pictures from the Apollo program. They showed for the first time the Earth as a small globe in the vastness of space. One of the astronauts, James Lovell, said “The vast loneliness is awe-inspiring and it makes you realize just what you have back there on Earth.” 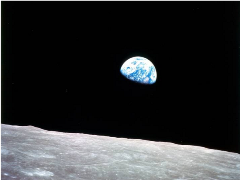 The second event was the Christmas broadcast of the crew back to Earth from lunar orbit. While American astronauts had been going into space for several years, none had ever been in space over Christmas Day.  This was an important enough event that the crew had prepared a Christmas message to be broadcast from lunar orbit. They had been told that more people would be listening to them than had ever listened to anybody speak and were also told to “do something appropriate.” During the public broadcast on December 24, Christmas Eve, astronaut Bill Anders announced that the crew had a message to give to “for all the people back on Earth.” The mission commander, Frank Borman, had selected a reading from the first part of the story of the world’s creation from the first chapter of Genesis. The astronauts took turns reading and then Borman concluded with “good night, good luck, a Merry Christmas – and God bless all of you, all of you on the good Earth.”

By going to another celestial body and leaving the Earth behind, the astronauts had given people a new way of looking at our home planet and therefore ourselves.  As Bill Anders put it after the mission, “We came all this way to discover the Moon. And what we really did discover is Earth.”

Apollo 8 was the first spacecraft that took people beyond the direct influence of the Earth’s gravity. That may sound like a technicality, but it was a tremendously significant achievement and one which was fraught with risk. Before this mission, if something went dreadfully wrong, at least the astronauts would return to Earth even if they did not survive the trip (as the Soviet cosmonaut Vladimir Komarov had died on Soyuz 1); on Apollo 8, if something went dreadfully wrong the crew would likely not come back at all.  In particular, the four-minute rocket motor burn that put the capsule into lunar orbit was a critical point: if the rocket had failed to burn or had not burned long enough, the astronauts would have been flung into some random orbit in near-lunar space; if it had burned for too long, they would have crashed onto the lunar surface. In between those extremes, there was any number of elliptical orbits around the Moon that would have spelled trouble for the mission. In the same way, when it came time to leave lunar orbit to return to the Earth, if the rocket motor had failed to ignite the three astronauts would never have returned home—at least not until another mission years later could be sent to return their bodies. It is no surprise that the crew described the rocket motor burn that put the capsule into lunar orbit as “the longest four minutes of their lives.”  In fact, NASA officials and even the astronauts themselves estimated that they had only a roughly 50-50 chance of successfully accomplishing their mission and returning safely to Earth. 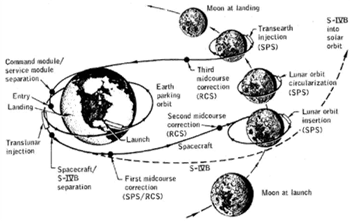 The Wikipedia article on Apollo 8 states that the Apollo 8 spacecraft orbited the Moon ten times over a period of about 20 hours. While the number of orbits is approximately correct, it cannot be exactly true because the spacecraft entered lunar orbit on the leading side of the Moon and left lunar orbit on the trailing side of the Moon. (Can your students figure out why without being told?)

This means that it went around the Moon either 9.5 times or 10.5 times. How would you figure out which number of orbits it was? The article also says that each orbit (after the first one, which with its higher apolune—like apogee but above the Moon—would have taken more time) took 128.7 minutes. From this you can calculate whether Apollo 8 went around the Moon 9.5 or 10.5 times.

December 18: An American Atlas rocket placed Project SCORE, a communication satellite, into orbit.  President Eisenhower's Christmas message was beamed from Project SCORE the next day and it stopped working on December 31.