The Periodic Table of the Chemical Elements

One hundred and fifty years ago the Russian chemist Dmitri Mendeleev (pronounced “Men-de-LAY-ev”) put together a chart showing the fundamental arrangement in chemistry:  the periodic table of the chemical elements.  This is a chart that lists the elements in order of ascending atomic number and groups elements with similar properties into columns.  Before this, the elements were known essentially as a random assortment of substance with various properties; after it, the elements were in a logical arrangement that cried out for an explanation.  This explanation took the form of atomic theory, atomic structure, and finally quantum mechanics.

2-PS1-1.  Plan and conduct an investigation to describe and classify different kinds of materials by their observable properties.

Chemical elements are basic substances, meaning that they cannot be broken down further into other substances.  One everyday example of a chemical element is carbon, which you can see in the “lead” of a pencil.  Other examples are gold and silver, which are found in expensive jewelry.

As chemists discovered more and more elements, they started to try to organize them into some pattern.  The first person to succeed in organizing them was the Russian chemist Dmitri Mendeleev, who created the periodic table in the 1860s and put the elements in order by their atomic weights.  There have been a few small improvements to Mendeleev’s table since then—most notably ordering the elements by the number of protons in each their atoms—but his basic structure has stayed the same.

Elements are made up of tiny things called atoms, which are made of even smaller parts—protons, electrons, and neutrons.  The number of protons in each atom of an element is called that element’s “atomic number.”  The periodic table arranges the elements from the lowest atomic number, hydrogen with 1 proton per atom, up to oganesson with 118 protons per atom.  The table is arranged in rows; each row is called a “period.”  Each element has its own square in the table which shows the element’s name, its symbol (one or two letters), its atomic number and its atomic weight.  Elements in the same column share similar characteristics; this is what makes the table periodic.

5-PS1-1.  Develop a model to describe that matter is made of particles too small to be seen.

Substances around us can be divided into two types:  elements and compounds.  An element is a substance that is made up of one type of atom; a compound is made up of different elements.  While the number of compounds is virtually unlimited, there are only about 90 elements that exist in nature.

You can think of the process as being similar to putting together a jigsaw puzzle.  There are several differences, though.  For one thing, you do not have a picture on the front of the box telling you what the finished periodic table will look like.  For another, when Mendeleev put his periodic table together, half the pieces were still missing.  Chemical elements were being discovered every few years, but still several were unknown.  The figure on the right shows the elements and the year in which each one was discovered; those colored in green, blue, dark blue, or violet were unknown in 1869.  Not having the bottom row is not a big deal, but missing the last column makes a difference.  The green-colored elements scattered around the middle of the table (which were also unknown when Mendeleev did his work) can also be quite confusing.  Conversely, the few yellow- and orange-colored boxes in the separate bar at the bottom of the chart, which Mendeleev did know about, were just isolated elements which he did not know where to put in the table.

Before 1800, so few of the chemical elements had been discovered that arranging them into a table was out of the question.  As more and more elements were isolated and their properties determined, though, chemists began to notice similarities in the properties of some of them.  In the 1820s, Johann Döbereiner noticed that triads of different elements tended to have similar properties.  He did not have enough data, though, to develop more than just a few of these triads; also, because of other undiscovered elements, there were several known elements that he could not put into triads.  His idea did not catch on.  A few years later an English chemist named John Newlands suggested arranging the elements in “octaves” (really of seven elements in a row because the noble gases had not been discovered yet), but his system broke down after the first couple of “octaves” and one wag suggested that he could get better answers by arranging the elements in alphabetical order.

As an aside, Mendeleev’s name is usually rendered in English as “Dmitri Mendeleev.”  Mendeleev was Russian, however, and his name in Russian (using the Cyrillic alphabet) is “Дмитрий Менделеев.”  His last name is pronounced with four syllables, not three; it has also been rendered into English as “Mendeleyev” or even “Mendelejeff” (as seen in the second line of the picture in the Grades 9-12 section).  His first name is sometimes spelled as “Dmitrii.”  In addition, the date given for Mendeleev’s assembly of the periodic table is often listed as March 1.  Mendeleev was Russian, however, and Russia still used the Julian calendar in 1869, so the date as far as he was concerned was actually February 17.

Suggested Activity:  List the chemical elements on a (very long!) length of adding machine tape.  Then roll up the tape into a “cylinder with bulges,” attaching each element to the one below it in the table with tape, staples, paper clips, or anything else that works.  The effect should be something like what is seen in the first few pictures on this web page.  This shows the periodic table without the artificial breaks between the noble gases and the alkali metals.  The “n” in the pictures stands for an isolated neutron; while this is not, strictly speaking, a chemical element, one could think of it as a “zeroth” element with hydrogen and helium being the first and second elements.

HS-PS1-1.   Use the periodic table as a model to predict the relative properties of elements based on the patterns of electrons in the outermost energy level of atoms. 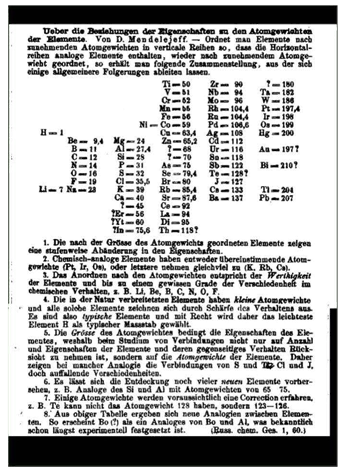 A sign of a major advance in science is that it sheds light on many different phenomena and makes many predictions that can be verified.  Mendeleev’s periodic table made some very specific predictions about chemical elements that had not been discovered at the time he assembled the table.  A typewritten version of his table, shown at the right (note that decimal points appear as commas), shows four missing elements with predicted atomic weights of 45, 68, 70, and 180.  These elements (scandium, gallium, germanium, and hafnium) were discovered later.  Even more striking, Mendeleev predicted several properties of these elements based on the properties of other elements on the same rows as the missing ones.  In addition to this, Mendeleev noted that several elements (erbium, yttrium, indium, thorium, tellurium, gold, and bismuth) seemed to be out of place in the table.  Because the table was arranged by atomic weight, this meant that the measured atomic weights as known at the time must be wrong.  When chemists measured the atomic weights of these elements again, the first (and lightest) five of them had indeed been measured incorrectly.

The periodic table also opened the way for advances in theories about the structure of the atom.  When Mendeleev published his table, scientists were still divided over whether atoms were real things or whether they were just a handy mathematical concept for understanding how some things happened.  With his ordering of the chemical elements and his establishment of the regular repetition of various physical and chemical properties of those elements, Mendeleev laid the groundwork for other scientists to think about the structure of atoms and how that structure would affect the atoms’ chemical properties.  Decades later, with the advent of quantum mechanics, the arrangement of electrons in “shells” around a central atomic nucleus gave a more fundamental explanation of the periodicity of the properties of the elements.  If the electrons in the outermost “shell” were arranged the same in two different elements, those elements would have similar properties.

Mendeleev’s periodic table, like all pioneering efforts, was not 100 percent correct.  For one thing, he had arranged the elements in order of increasing atomic weight.  Some elements were out of order, though:  after argon’s discovery in 1894, for example, chemists knew immediately that it belonged before potassium in the table even though it had a larger atomic weight.  Other examples were not so obvious.  Some scientists proposed an “atomic number” which usually increased with atomic weight but which deviated from it now and then.  A quarter-century after Mendeleev published his table, German physicist Konrad Roentgen discovered x-rays.  In 1913, a young Englishman named Henry Moseley established that the frequencies of the x-rays emitted by the elements fell onto a smooth curve when graphed against their position on the periodic table, with just a few exceptions, establishing the validity of the idea of the “atomic number.” The exceptions were elements with out-of-order weights and other missing elements—in addition to Mendeleev’s—whose existence Moseley predicted from his results.  (All of the predicted elements were found within a few decades.  One of them, hafnium, had also been predicted by Mendeleev.)  This atomic number is now recognized as the number of protons in the atom’s nucleus and the number of electrons surrounding the nucleus when there is no net charge on the atom.  (Remember that when the idea was proposed, scientists were still not sure about whether atoms were real.)  The modern periodic table puts the elements in order of increasing atomic number.

While this is not directly related to the periodic table, your students may enjoy this song listing the chemical elements by Tom Lehrer, who was a mathematics professor from Harvard University who took up songwriting in the 1960s.

February 17, 1959:  The American Vanguard 2 was launched into orbit.  The third stage nudged the satellite, causing it to wobble.  It is still in orbit.

February 28, 1959:  The Americans launched Discoverer 1, the first American spy satellite.  It was a prototype that did not carry a camera or film and was the first object launched into polar orbit.