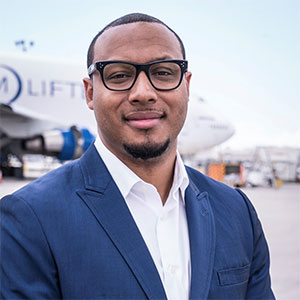 Cam Murphy is the President of FEAM, a family-owned company founded in 1992 out of Los Angeles. The FEAM story began as “F&E Aircraft maintenance” when founder, Fred Murphy and friend Everet started fixing planes at LAX; just two guys and a truck. Today, the company employs over 1,000+ technicians in 30+ airports. FEAM provides maintenance, repair, and other overhaul services to domestic, international, commercial and Cargo Airlines in the US.

Cam Murphy is second generation in his family business. In 2010, after Cam sold his niche aircraft staffing company, he joined FEAM full time. Over the years Cam’s experiences include positions in almost every department, from janitorial services, stockroom clerk, to shadowing technicians on the flight line and various management roles.

Cam has his BA from Texas Christian University (TCU) where he played football followed by an MBA in Aerospace and Defense from the University of Tennessee College of Business. Cam has a Certification for Lean Maintenance repair and Overhaul and was a 2017 Forbes “30 under 30” which recognizes the brightest young entrepreneurs, innovators, and game changers in the US.

Cam also serves on multiple Board of Directors including: The advisory board for University of Tennessee, The Greater Miami Aviation Association, United Way Young Leaders Board of Miami, and the Miami Country Day School.

To give you a window into Cam’s approach to leadership here are a couple of his more famous quotes: “Our customers really are strategic partners. We succeed when they do. That type of strategy and thinking made a huge impact on me,” and “I never want us to lose the culture of treating each other within the organization like family and team members because teams have common goals and win championships. Our common goal is to satisfy our customers and help support their operations.”