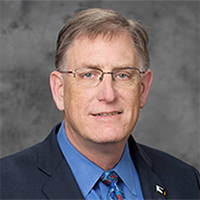 Dan Dumbacher is the Executive Director of the American Institute of Aeronautics and Astronautics (AIAA).

Before joining the AIAA staff in January 2018, Dumbacher was a Professor of Engineering Practice in the School of Aeronautics and Astronautics at Purdue University, where he taught courses in systems thinking, systems engineering, and space policy.

During his career, he has received numerous awards and honors including the coveted Silver Snoopy Award and the NASA Distinguished Service Medal. In 2015, Purdue recognized him with the Gustafson Teaching Award.

Dumbacher earned his bachelor's degree in mechanical engineering from Purdue University and a master’s degree in business administration from the University of Alabama in Huntsville. He has also completed the Senior Managers in Government program at Harvard University.

Dumbacher is a native of Indianapolis, Indiana. He and his wife Lee have three grown children.