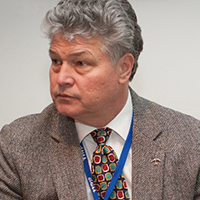 Fay is the Associate Director for Flight Strategy, Integrated Aviation Systems Program for NASA Aeronautics. In this capacity he leads planning and formulation of large flight demonstrations. He is currently focused on establishing the feasibility of Megawatt-class electrified powertrain system flight demonstrations with the industrial base, other government, and academia.

Previously, from 2009-2016, Fay was the Project Manager of the Environmentally Responsible Aviation Project within NASA’s Integrated System Research Program.   In this role, he directed the formulation and execution of NASA’s integrated system research project focused on the subsonic transport sector, working in partnership with Industry, FAA, AFRL and other government agencies.  The technology development  project was focused on research, development and integration of engine and airframe technologies that enable dramatic improvements in noise, emissions, and performance characteristics of future subsonic aircraft operating in the air transportation system.  The six-year, $420M project closed out in March 2016, meeting all technical objectives. During the 6-year life cycle, ERA over 1000 individuals from government and industry collaborated on the project.  The ERA Team was awarded the Aviation Week Laureate Award for Technology in 2016, the Royal Aeronautical Society Team Specialists Gold Award in 2017.