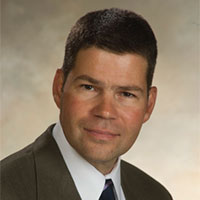 Prior to this assignment, Dr. Blevins served as the SLS Deputy Chief Engineer. He previously served as Technical Assistant in the Structural Design and Analysis Division in the Spacecraft & Vehicle Systems Department, where he was the Aerodynamics sub-discipline lead for SLS, the lead for the SLS Buffet and Vibroacoustics Resolution Task Teams, and the SLS Alternate Discipline Lead Engineer for Structures and Environments.

His other work since coming to Marshall in 1999 include propulsion researcher and principal investigator as well as a combustion devices engineer before becoming a team lead in Aerodynamics. On a detail assignment, he served as Aerosciences Branch Chief in 2016.

Before his work at NASA, Dr. Blevins gained industry experience at Honda of America Manufacturing, and Sverdrup Technology Group (now Jacobs Engineering). He is both an Associate Fellow of the American Institute of Aeronautics and Astronautics and a licensed Professional Engineer. He is also an experienced pilot with airline transport pilot and flight instructor ratings.

Back to Aerospace Perspectives Series Webinar