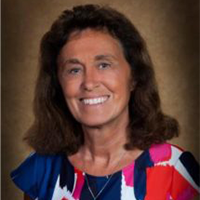 Later, in the company’s Space business area, she played pivotal strategy, capture, and program management roles prior to moving into executive management.  She worked on many Satellite, Spacecraft and Launch Vehicle propulsion programs always working to advance the state of the art of propulsion technology while maintaining focus on Mission Success.   Some of her key accomplishments included:  Managing the Atlas V Solid Rocket Motor program that developed and qualified the Solid Rockets that powered the Pluto New Horizons Mission; Leading the Electric Propulsion Development Organization Responsible for developing Advanced Extremely High Frequency (AEHF) Electric propulsion that revolutionized Satellite propulsion, Delivery of the nations next generation Human Space  Propulsion systems such as the Orion and RS25 for SLS.

Throughout her career she worked with DOD, NASA and commercial customers on efforts to advance launch and in-space propulsion and materials and manufacturing technologies.  She is widely known in the aerospace community and has held leadership roles in numerous industry organizations, including the American Institute of Aeronautics and Astronautics (AIAA), Coalition for Deep Space Exploration (CDSE), Powerhouse Science Center and the SLS/Orion industry coalition.  She has also been a champion throughout her career for Science, Technology, Engineering and Mathematics (STEM) and Women in Aerospace (WIA), being a leader, both internally through Women in Network (WIN) and externally, through numerous industry groups such as WIA, California Assembly task force on STEM as well as working with local junior high and high schools.