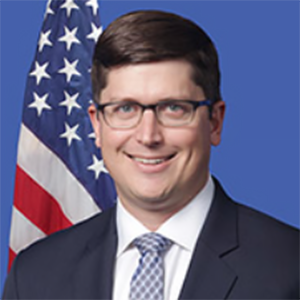 Kevin Welsh is the Executive Director of the Office of Environment & Energy at the Federal Aviation Administration. In this role, he leads the development of aviation environmental and energy policies, goals, and priorities, and oversees research, engineering and development projects and initiatives. In this capacity, he also represents the United States at the International Civil Aviation Organization Committee on Aviation Environmental Protection to develop recommendations for international standards and policies for aviation environment and energy issues.

Prior to assuming his current position in November 2017, Kevin held several roles within the United States Government working on aviation, environment, and energy issues, including serving for two years as a Director at the National Security Council in the White House. Kevin also previously worked in FAA's Office of Environment & Energy as Senior International Advisor, where he led the development of FAA's international environmental strategy and coordinated U.S. engagement in the Committee on Aviation Environmental Protection.

Prior to joining the federal government, Kevin was a member of the Environmental Affairs team at Airlines for America where he represented U.S. airlines in addressing environmental laws and policies related to aircraft noise, climate change, local air quality and sustainability. Kevin began his career as an associate attorney in the real estate and environmental practice of the Paul Hastings law firm.