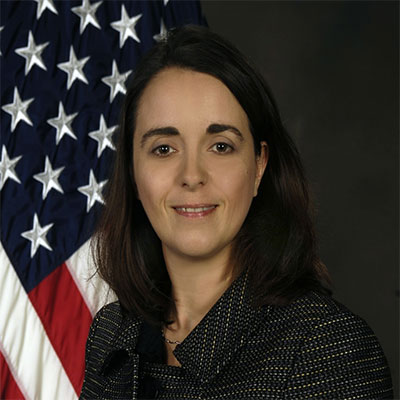 Ms. Ruth Moser is the Director, Requirements, Analysis and Resources for North American Aerospace Defense Command and United States Northern Command, Peterson Air Force Base, Colorado. She is responsible for developing requirements, identification of capability gaps, executing resources, shaping and creating solutions and assessing the achievement of NORAD and USNORTHCOM objectives. She also facilitates the commands’ participation in the programming and budgeting process to ensure that the Commander, NORAD and USNORTHCOM, has the resources and capabilities required to accomplish all assigned missions.

Ms. Moser is from North Logan, Utah, and began her career supporting the Air Force as a member of the Technical Staff at the Aerospace Corporation where she provided technical support to the Air Force Research Laboratory in Albuquerque, New Mexico. She then joined the civil service as an Aerospace Engineer at the AFRL’s Space Vehicles Directorate, Kirtland AFB, New Mexico. There, she served in a variety of engineering, technical and leadership positions within the AFRL. Ms. Moser then transferred to the Office of the Secretary of Defense where she served as a Senior Program Analyst providing oversight of the Department of Defense space control and space situational awareness programs and activities. She was appointed to the Senior Executive Service in August 2012, where she served as the Director of Cyber and Space Programs in the Office of the Secretary of Defense. There, she was responsible for the oversight of all the Department of Defense cyberspace programs and most of the nation’s military space positioning, navigation and timing, navigation warfare, meteorology and oceanography programs and activities. Prior to her current assignment, she served as the Director of the Sensors Directorate of the AFRL where she was responsible for developing and delivering advanced intelligence, surveillance, reconnaissance, precision engagement and spectrum warfare capabilities.