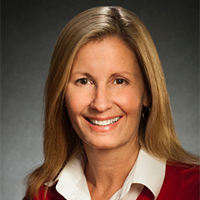 Teri Finchamp serves as the director of the Future Production System team in Product Development for Boeing Commercial Airplanes. In this role she leads efforts to create and optimize a production system for the company’s next new airplane. Her team emphasizes safety,stability and repeatability. Previously she held the position of director of Production System Engineering on the New Mid-Market Airplane (NMA) program for BCA.

Finchamp earlier served as director of Advanced Operations and Quality of Phantom Works within Boeing Defense, Space & Security (BDS). In this position, she provided functional support by implementing cutting edge affordability initiatives into programs around Phantom Works, a research and development organization that designs, builds, tests and operates prototypes across a variety of environments – from space to seabed.

Prior to this position, Finchamp managed teams on the Joint Strike Fighter program. She led a fabrication team on the X-45C, which later operated under the name Phantom Ray. During her tenure with the program, the team completed a successful flight test program. She also served in a manufacturing leadership role on the Phantom Eye program.

Beginning her management career as a foreman on the F/A-18 program in 1996, Finchamp was promoted within a year to general foreman and moved into Phantom Works.

Her career with Boeing started in 1988, when she hired in as an industrial engineer for the F-18 and C-17, later adding responsibilities for T-45 and AV8B where she gained technical expertise in advanced aircraft and program quality excellence. Prior to her Boeing career, Finchamp worked with Ryerson Steel for three years in  fabrication.
Finchamp holds a bachelor’s degree in engineering management from the Missouri University of Science and Technology and a master’s degree in Business Administration from the University of Missouri – St. Louis.