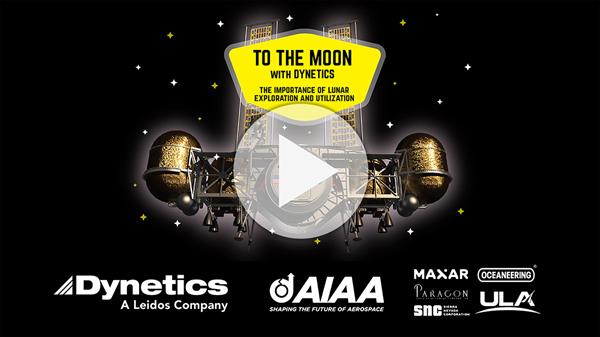 To the Moon with Dynetics: The Importance of Lunar Exploration and Utilization

Go behind the scenes of Dynetics Human Landing System featuring an in-depth discussion with industry experts about the exciting opportunities created by a sustained human presence on the moon.

This AIAA Aerospace Perspectives Series episode, hosted by AIAA and presented by Dynetics, a Leidos Company, took place on 15 September 2020,.

Jim Dutton is a retired U.S. Air Force Colonel and former NASA astronaut. Dutton was one of 14 members of the 19th NASA astronaut class and logged over 362 hours in space. He now supports the Artemis program and the HLS system as a technical advisor at Dynetics.

Lee Archambault, a retired U.S. Air Force Colonel and former NASA astronaut, was selected as a NASA pilot in 1998 and has logged over 27 days in space. In his current role at Sierra Nevada Corporation, Archambault serves as the director of project engineering.

Janet Kavandi is a retired NASA Astronaut and former NASA Glenn Research Center Director. She has logged more than 33 days in space and currently serves as senior vice president of programs for the Space Systems Group for the Sierra Nevada Corporation.

Carl Walz is a U.S. Air Force Retired Colonel and former NASA astronaut. He is a veteran of four space flights and has logged a total of 231 days in space with 3 spacewalks in the EMU and Orlan space suits, totaling 19 hours. Following his career at NASA, Walz pursued industry experience and is currently the director of Business Development at Oceaneering.

Alan Stern is a planetary scientist, space program executive, aerospace consultant, author and public speaker. Since 2001, he has led NASA’s $880 million New Horizons mission, and in 2018, he was appointed by the Trump administration to a six-year term on the U.S. National Science Board. Stern has over 30 years of experience in space instrumentation development.

Jack Burns is a professor in the Department of Astrophysical and Planetary Sciences at the University of Colorado Boulder, and is vice president emeritus for Academic Affairs and Research for the CU system. Burns is currently the director of the Network for Exploration and Space Science, a $5 million center of excellence, funded by the NASA Solar System Exploration Research Virtual Institute.

Dan Hendrickson serves as the vice president of Business Development for Astrobotic, a lunar logistics company based in Pittsburgh, Pennsylvania. Dynetics is the propulsion provider for Astrobotic’s Peregrine Lunar Lander, which will deliver customer payloads to the lunar surface.

Georgiana Kramer is a senior scientist at the Planetary Science Institute in Tucson, Arizona. She is a planetary geologist with a background in geochemistry, petrology, and remote sensing. She studies and maps the composition and structure of terrestrial planetary bodies; her expertise is the moon.