As we embark on a bold new era of space exploration, AIAA’s ASCEND provides you with something few space events can: a seat at the table.

The new space economy is ready for takeoff. In the coming years, it’s anticipated to skyrocket from $4 billion today to more than $1 trillion. This phenomenal growth will be driven by a number of factors, but none more important than you.

Why should I attend?

During ASCEND, you’ll have a roll-up-your sleeves, hands-on opportunity to influence the course and trajectory the space economy takes into the future. It’s the first event of its kind to convene the entire international space ecosystem—not just the traditional players like propulsion, commerce, and national security, but also sectors like hospitality, mining, venture capital, tourism, and other private enterprises that will play an important role in making space commerce commonplace. ASCEND is not about making history but the future.

This is the meeting of the minds that you can’t afford to miss.

ASCEND will feature leading voices from the space community and beyond. Stay tuned for our keynote announcements. Current speakers include representatives from:

The ASCEND program is built to leave you inspired and equipped with new tools, techniques, and ideas you can apply right away. You’ll experience a daily schedule that addresses big questions and challenges facing the entire space community.

Macro topics covered at ASCEND include:

Can I participate in the ASCEND program through a Call for Content?

The ASCEND Call for Content closed at 8pm ET 31 March 2020. Please contact us at ascend@aiaa.org with any questions regarding submissions.

Are there Partnership Opportunities?

Contact ascendsales@smithbucklin.com to request the Sales Kit and become an ASCEND partner 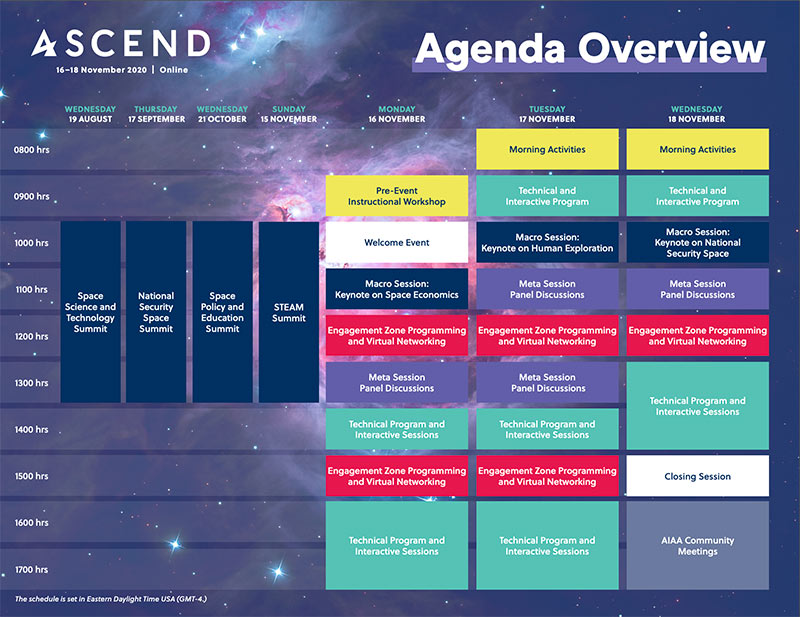 ASCEND will have its share of astronauts and astrophysicists, but it will also feature entrepreneurs and visionaries from fields not traditionally associated with outer space. Fields that will be essential components in making humanity’s off-world future a reality. Nothing reflects this rich diversity and ingenuity more than the distinguished speakers at this year’s event.

Check out the full speaker lineup

Connect with engineering, defense, private enterprise, civil, and emerging technology sectors to shape the future of the space economy. Become a sponsor and play a leading role in defining the promise and potential of the emerging space economy.