Presented Annually to an Industrial Engineer Graduate of the Daimler School 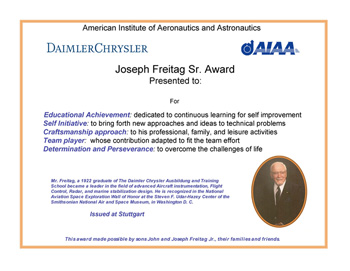 The Joseph Freitag, Sr. Award was created to inspire students attending the Daimler Ausbildung and Training School in Stuttgart Germany about the value of their education.

Mr. Freitag, a graduate of the Daimler School in 1922, became a leader in the field of advanced aircraft instrumentation, flight control, Radar and marine stabilization design. He is recognized in the National Aviation Space Exploration Wall of Honor at the Steven F. Udar-Hazy Center of the Smithsonian National Air and Space Museum in Washington, DC. Mr. Freitag was born 04-04-04 and grew up in Unterturkheim where his father was a policeman. He was the fifth born of 10 children. He went ice skating on the Neckar River in winter, and played soccer until his 18th birthday. He became serious about his life at the age of 14 when he began his Lehrlings Abteilung der Daimler Motoren Gesellschaft. With an exact birth date of 04-04-04 it is no wonder that he developed a passion for precision and later design while he attended the school. He graduated on April 25, 1922.

He worked for two years in the motor repair shop and the test-engineering department. His dream was to become a race driver. However, he did not get along with his new boss so he quit! In the next two years, he worked for Contessa-Nedel and Roleder. With the deteriorating economic situation in Germany, he accepted the ticket from a brother and sister to go to America in 1927.

He had a total of 8 jobs in the early years but finally found Sperry Gyroscope Company in 1929, which was the beginning of the U. S. economic depression. He held increasing leadership positions for 40 years. He married Amy, who had come from Scotland and they had three sons, John, Joseph, and William. John and Joseph became engineers and had successful careers with high technology companies while William studied finance but unfortunately died before he reached his potential.

In addition to his successful career, he had a wonderful life involving both Scottish and German families and enjoyed many hobbies. He built the family television receiver before they were commonly available in stores and designed and built his own home in 1952. He won awards for his handicraft furniture. He was awarded trophies as a “Gentleman Hunter” in Austria and “The Fisherman’s Award” for his deep sea fishing catches.

During his retirement, he volunteered his services to the communities were he lived. He became President of the German-American Club in Florida, President of his Homeowner’s Community and Commodore of the Coast Guard Auxiliary. He became custodian of the Freitag Coat Of Arms. In his 99th year his technical achievements were recognized by placing his name on the “Walk of Honor” at the Smithsonian Air & Space Museum in Washington, D.C. He died in 2006 at the age of 102. The purpose of this award, is to inspire the students that graduate from this school of what can be done in a lifetime with this education – not that my father lived for 102 years.

He always valued his education and for this reason, his sons John and Joseph, their families and friends decided to establish the Award with the cooperation of the AIAA and the Daimler organization. For administration purposes, the funds are invested and managed by the AIAA. The faculty of the Daimler school selects a student from those who have been accepted to have a higher education to receive the award based on the criteria that characterized the life of Freitag.

Each year, the selected student will receive 1000 Euros to assist in the expenses of further education The members of the Freitag Foundation hope that all students who attend the Daimler school will be inspired by the example of Joseph Freitag, Sr., value their education, and live their individual lives in a manner that brings them career satisfaction, personal happiness, and by volunteering, use their talents to improve their community and the lives of others.