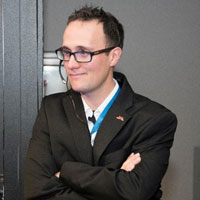 Job Description
Like most folks at the Lab, I wear multiple hats. I serve as a spacecraft flight controller, or Mission ACE, and the Deputy Real-Time Operations Lead for the Cassini mission. I’m responsible for the safe operation of the Cassini spacecraft at all times while on console.In my other capacities on Lab, I’m training as a Spacecraft Systems Engineer, Flight Director, and Testbed Engineer for the Mars Exploration Rover Opportunity and a Mission Operations Assurance Manager for the Mars Science Laboratory Curiosity.

As a kid, what did you want to be when you “grew up”?
Like most young space nerds, I wanted to be fighter pilot or an astronaut when I grew up, but it wasn’t always my first choice. July 4th, 1997 was the landing of the Mars Pathfinder spacecraft with the Sojourner rover. The reason this was a really special event for me was because it was my very first exposure to a space exploration mission and the first live NASA event I watched. It was in that moment that I wanted to become those people on TV—the spacecraft engineers. I think it’s really special that the NASA mission that first inspired my interest with space exploration occurred 20 years ago this year, and now I work at the facility, with some of the very people who made it all happen. Talk about living out your dream!

How far can YOU see?   Where do you see the aerospace industry 10-20 years from now?
I see the approach to designing and operating new spacecraft missions considerably different in the coming decades compared to the way it’s done today. Model-Based Systems Engineering is starting to become a more acceptable practice at JPL, due in large part to the size and complexity of the missions that JPL is undertaking in the near term. The Lab also has to contend with the current and foreseeable budgetary environment, which isn’t expected to grow significantly over the next decade. This means JPL needs to work smarter and, most importantly, cost-effectively as projects progress through their design life cycles I also see a drastic shift in the operation of NASA deep-space robotic missions, moving more toward autonomous real-time spacecraft operations and infusing intelligent-fault protections systems into the spacecraft themselves, enabling the spacecraft to make some of its own decisions regarding responses to system faults, relying less and less on ground intervention.

One insightful fact you want everyone to know:
Engineering is a practical art and that becomes very apparent when you move from the world of academia to industry. There is just so much about engineering that cannot be taught in a classroom setting—real-time spacecraft operations, testbed engineering, spacecraft integration and test, for example—that you have to get into the field and get your hands dirty. JPL’s recently retired director put it best, to paraphrase: to become a real expert in a field, you need to spend at least 10 years and 10,000 hours in that field before you can really call yourself an expert in it.