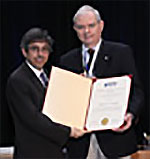 AIAA has selected Professor Robert Stengel for its Member Spotlight for January 2012 in light of his significant contributions to the aerospace industry. Dr. Stengel, an AIAA Fellow, is a professor of mechanical and aerospace engineering at Princeton University, Director of the Program on Robotics and Intelligent Systems, and an Affiliated Faculty Member of the Program in Quantitative and Computational Biology and of the Princeton Neuroscience Institute. Recognized as one of the most innovative authors in the aerospace community, he is the author of two acclaimed books on the dynamics, optimization, and control of aerospace systems. In light of his accomplishments, Dr. Stengel received the 2012 AIAA Pendray Aerospace Literature Award at an awards ceremony on 11 January during the 50th AIAA Aerospace Sciences Meeting, in Nashville, TN.

Dr. Stengel’s first book, Optimal Control and Estimation, originally published as Stochastic Optimal Control: Theory and Application by Wiley & Sons in 1986, was republished by Dover Publications under its current name in 1994. The book presents theories and methods for optimization, estimation, and control of dynamical systems in both deterministic and stochastic frameworks. The methods covered in the book are applicable to a wide range of aerospace vehicles and systems, as well as other systems, such as electrical, mechanical, and biological systems, making the book popular in other fields in addition to the aerospace control community. In his nomination of Dr. Stengel for the Pendray Aerospace Literature Award, Professor Yiyuan Zhao, Department of Aerospace Engineering and Mechanics, University of Minnesota, stated:

“Particularly for engineering students, Professor Stengel is able to give readers an introductory, ‘gut feel’ understanding of the fundamental issues associated with the theories. This book has been used in a classroom setting in our department at the University of Minnesota. Almost all graduates and faculty who use the book in our department have said they greatly enjoyed the book. Even recently in my research, I found something in his book that greatly helped me understand the inherent challenges of nonlinear stochastic optimization. This book easily tops the list of references on the subject that I suggest to my students. It has become a classic in the field.”

Dr. Stengel’s most recent book, Flight Dynamics (Princeton University Press, 2004, 845 pages) is a unique book, covering all of the significant elements of aircraft flight and relating classical concepts to modern methods of computation and evaluation. In his nomination of Dr. Stengel for the Pendray Aerospace Literature Award, Eric Feron, Professor of Aerospace Software Engineering at the Georgia Institute of Technology, stated, “I have developed in-depth knowledge of Flight Dynamics, which I consider one of the most important contributions to the subject over the past 20 years. Indeed, the range of material covered in the book far exceeds the material usually taught at universities, both in the undergraduate as well as graduate programs.”

Dr. John Valasek, Associate Professor and Director, Aerospace Engineering Department at Texas A&M University, in his nomination of Dr. Stengel, added, “I can personally attest that Dr. Stengel’s newest textbook, Flight Dynamics, is a landmark in its field. I have worked in this area all of my career and taught it to both undergraduate and graduate students. There is no other book which has been written which contains the breadth and depth of technical coverage which this book does.”

Prior to joining the Princeton faculty in 1977, Dr. Stengel was with The Analytic Sciences Corporation, Charles Stark Draper Laboratory (TASC), the U.S. Air Force, and NASA. While at the Draper Laboratory from 1968 to 1973, he was principal designer of the Apollo Project Lunar Module manual control logic used for all moon landings, and he contributed to Space Shuttle guidance and control system design. His work at TASC from 1973 to 1977 included optimal-control modeling of the human pilot and resulting interactions with aircraft dynamics, fuel-optimal flight paths for jet transports, digital control of high-performance aircraft and helicopters, submarine dynamics and control, and statistical assessment of the effects of electric powerplant waste water on biologically indigenous populations. While serving as an Air Force lieutenant from 1960 to 1963, he was a Range Safety Officer at NASA's Wallops Flight Facility.

While taking a leave of absence in 1998, Dr. Stengel served as a Visiting Professor/Scholar at Duke University, Massachusetts Institute of Technology, University of Cambridge, Delft University of Technology, Imperial College of Science, Medicine, and Technology, University of California at San Diego, and Stanford University. From 1994 to 1997, he served as the Engineering School's Associate Dean for Academic Affairs. During that time, he initiated new programs of graduate study and undergraduate computer education, and he developed an innovative approach to teaching engineering freshman seminars. As Director of Princeton's Flight Research Laboratory from 1977 to 1983, Dr. Stengel, his students, and staff conducted pioneering experimental research on digital flight control systems, flight computer networking via fiber-optics, aircraft flying qualities, and aerodynamic system identification. This research used Princeton's two fly-by-wire, variable-stability aircraft and a specially instrumented sailplane.

Dr. Stengel received the S.B. degree in Aeronautics and Astronautics from M.I.T in 1960, and M.S.E., M.A., and Ph.D. degrees in Aerospace and Mechanical Sciences from Princeton University (1965, 1966, 1968, respectively). He is a Life Fellow of the Institute of Electrical and Electronics Engineers, and an AIAA Fellow. He has received the John R. Ragazzini Education Award of the American Automatic Control Council (2002) and the AIAA Mechanics and Control of Flight Award (2000). Together with R. John Hansman, MIT, and Robert Lilley, Ohio University, he is the recipient of the FAA's 1997 Excellence in Aviation Award.

Dr. Stengel said the following about what influenced him to seek out a career in aerospace, and the people who served as his mentors:

“I was 12 and in the sixth grade when I realized that I knew more about airplanes than any of my classmates. I remember one particular book that described all of the U.S. jets that had been produced up to the time. I memorized it, and to this day can tell you the important differences between the F-88 Voodoo and the F-89 Scorpion. In addition to reading books and magazine articles about air and space in Popular Science and Collier's, I was a member of the Civil Air Patrol and an Air Explorer Boy Scout. Of course, I made lots of model airplanes, many of which hung from my bedroom ceiling and a few of which grace my university office today. Flying "U-control" gasoline-powered models and Jetex-powered free flyers stimulated my passion for aeronautics and astronautics.”

Stengel said he would offer this advice to aspiring aerospace engineering students:

“Recognize that your undergraduate education provides a unique opportunity for learning a broad variety of skills, for appreciating the context within which engineering contributes to society, and for understanding what interests you. Identify the topics that are the most fun for you, and then learn enough about those topics to assure that you can earn your living doing what you like to do. Enjoy your social and athletic activities, but know that too many college graduates look back and say, "If only I had paid more attention to the fundamentals, had taken that technical elective course, or had drilled deeper into my senior research project. Plan to earn at least one graduate degree in your field of interest. You needn't enter graduate school immediately after earning your B.S. You may want to spend a few years doing something real (as I did) before continuing your studies, or you may have the chance to work on a graduate degree with partial support from your employer.”

“Now that you have the technical academic background, grasp every opportunity to hone your writing and oral presentation skills. Prepare papers for technical conferences and journals. If your current job does not encourage personal development or offers limited growth potential, you may want to think about getting another job. Focus on what you do best, and do not leave your career development to chance.”

Dr. Stengel also offered his vision of where the industry may be in 20 years. He forecasts the following:

"As the physicist Niels Bohr said, "Prediction is very difficult, especially about the future." Predictions made by corporations, futurists, and blue-ribbon panels are usually optimistic, sometimes cautionary, and rarely dystopian. My own view is that passenger and cargo air transport will continue to grow, limited only by the realities of air traffic control and fuel availability. Passenger and cargo space transport will be provided entirely by commercial enterprises (at least to low-earth orbit). Augustine's Laws are on target: at current price growth rates, "In the year 2054, the entire defense budget will purchase just one (manned) aircraft". For this and more technical reasons, virtually all non-cargo military air- and spacecraft will be unmanned. NASA's current annual budget is a lower percentage of the Federal budget than it has been in any year since the Apollo era. Without increased support from Congress and its constituents, NASA will alter the balance between operations, research, and development. Aerospace has become a mature industry, and that is not a bad thing.”

AIAA congratulates Professor Robert Stengel on his numerous and significant contributions to the aerospace industry, and to AIAA, and for his selection as the AIAA member spotlight for January 2012.