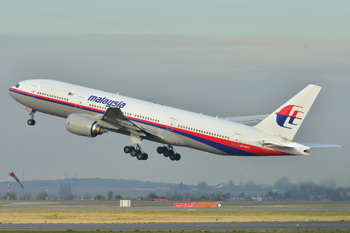 In a world of few easy solutions, a senior official from the U.N.'s International Civil Aviation Organization said there’s a straightforward answer to the question of how to track aircraft as they cross the world’s oceans.

Most airliners – including the Malaysia Airlines Boeing 777 that disappeared in March – are equipped with ACARS – the Aircraft Communications Addressing and Reporting System – a set of electronics that can transmit tracking information and engine health reports to airlines via geosynchronous satellites.

Without specifically referring to ACARS, Nancy Graham of ICAO told an audience in Washington, DC: “Turn it on. That’s all we need to do. Turn it on.” She told the small gathering of aviation experts that “we don't need any more equipment” on airliners.

Graham appeared to be referring to the fact that some airlines elect not to pay for services transmitted over ACARS.

Graham oversees ICAO’s work on the flight tracking issue in her role as director of ICAO’s Air Navigation Bureau in Montreal. She gave a keynote address to open the “Global Flight Tracking” discussion at a downtown Washington, D.C., law firm. The event was organized by the United Nations Association of the National Capital Area, with support from the International Aviation Club, the Royal Aeronautical Society and the Flight Safety Foundation.

Graham defended ICAO’s May decision to turn to an industry group – the International Air Transport Association – for recommendations about how to track airliners around the globe, saying that was the best way for ICAO, a U.N. agency, to get a system in place quickly. “I could not get 191 states together without a set of rules, without a timeline, and then have a discussion which would have eventually ended up in our contemplating our navel,” she said.

IATA’s Aircraft Tracking Task Force is scheduled to make recommendations to ICAO by the end of September about flight tracking technologies and procedures.

Graham said IATA’s work is part of a two-track process for making airliner tracking a reality: IATA will issue a set of recommendations to set the stage for establishment of a new global tracking rule perhaps within two years – “That’s a very fast track for a global rule, but I think it’s achievable,” she said. On a second track, ICAO has “leaned on” airlines to voluntarily turn on the tracking equipment they already have – “the airlines are beginning to put that in place now,” she added.

Graham acknowledged that even before the Malaysia Airlines disappearance, ICAO was concerned about flight tracking. She said the agency’s existing language on the subject is “pretty weak.” Regulators around the world are supposed to ensure that airlines are “able to discern where the aircraft is,” but the language doesn’t provide “any guidance material” about how to do that. “It’s not sufficient in terms of a rule,” she said.

That’s the problem that the airlines and IATA are supposed to resolve.

A related hot topic for the panel was whether to tamper-proof tracking equipment, given speculation that the flight crew or someone else aboard the missing jet might have disabled the communications electronics.

“We don’t even know what happened with that flight in the first place, but yet there’s this chorus of voices that are saying we have to quote-unquote pilot-proof the aircraft,” said Alaska Airlines pilot Sean Cassidy, the first vice president at the Air Line Pilots Association. He said pilots need to retain the ability to “de-energize” electronics – including simple tracking devices – to keep them from “catching on fire” after a malfunction.