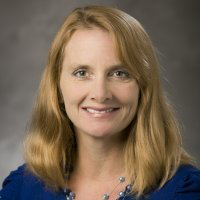 Seeking warmer climes than those found in the west at this time of year, the Spotlight pointed its beam south this month, falling on Durham, North Carolina, and Duke University, and illuminating Dr. Mary L. “Missy” Cummings. Cummings is a new AIAA Fellow, and a Professor in the Department of Mechanical Engineering and Materials Science and an Associate Professor in the Department of Electrical and Computer Engineering. She is also an Associate at the Duke Initiative for Science & Society and an Investigator at the Duke Institute for Brain Sciences.

Cummings began her career in the United States Navy where she was one of the first female fighter pilots, flying both A-4E Skyhawks and F/A-18 Hornets. After her naval career ended, Cummings went on to earn her Ph.D. in Systems Engineering and became interested in the intersection of human–machine relations, particularly in the operation of unmanned air systems. To study this critical area, Cummings built the Humans and Automation Laboratory at MIT.

Cummings later moved the laboratory to Duke University where it became the Humans and Autonomy Laboratory. Cummings’ lab studies how human and computer decision making works in areas of complex socio-technical systems and embedded autonomy, including human-algorithm interaction. Numerous government agencies consider Cumming’s work to be pioneering in the field and eagerly seek her expertise on numerous projects.

Her work has made her a member of many boards, including the U.S. Air Force’s Scientific and Advisory Board’s committee for UAVs in Irregular Warfare, the Stimson Commission on U.S. Drone Policy, the National Research Council’s Board of Human System Integration, and the NASA Advisory Council’s Aeronautics Committee. She was recently the recipient of the 2016 Nevada Medal – the highest engineering and science honor presented by the Governor of Nevada.

When asked what inspired her to enter the aerospace profession, Cummings acknowledged the role that her father played: “My father was a mechanic in the Navy who worked on aircraft electronics so I was around aircraft from a very early age. Then while I was attending the U.S. Naval Academy, I found out women could be pilots and decided that is what I wanted to do.” She added that a bit of pop culture played a role too: “Of course in 1986 when ‘Top Gun’ came out, I was a junior in college, and that was the icing on the cake.”

Her favorite career memory is one that very few people in the aerospace community have actually accomplished, citing: “Landing a plane on a carrier, which was equivalent to getting tenure at MIT.”

Cummings had some unique advice for college students seeking to enter the aerospace profession, counseling that they “should seek out unmanned systems (aka drones), which are the gateway to an entirely new field of aerospace.” For high school students she had advice that has been oft repeated in this column, advising them to “Take as many math and science classes as possible and get involved in competitions.”

When asked what more senior members of the aerospace community can do to help younger members and those just beginning careers, Cummings replied that involvement was really important, urging more senior members to become “involved in local chapter activities, embrace social media, and lay the groundwork for scholarships, competitions, and local entrepreneurial projects. Enabling young people is the best way to support them.”

When the conversation turned to AIAA’s value to the community, Cummings was quite emphatic, stating, “AIAA provides a network of individuals who share similar passions, dreams and desires. I have found an incredible amount of inspiration from other AIAA members, both young and old, and I truly love to be around other people who love to talk about airplanes and space vehicles.”

Cummings is a newly elected Fellow of AIAA, and when I asked her what her reaction was to the honor, she replied: “I am deeply honored that many of the most dedicated and accomplished people in aerospace have recognized my accomplishments, and I am extremely fortunate to be part of an organization that has been not only supportive, but a very active part of my success.”

I closed the interview by asking Cummings’ thoughts on the future of aerospace. She enthusiastically and succinctly replied, “Drones, drones, drones, with flying cars not far behind!”

AIAA congratulates Mary L. “Missy” Cummings for her selection as the February 2016 AIAA Spotlight subject, and congratulates her for her selection as an AIAA Fellow. We also thank her for her devoted service to the United States, and we wish her the best on her future endeavors, as she continues to make the intersection of machine and human safer, more reliable, and secure.