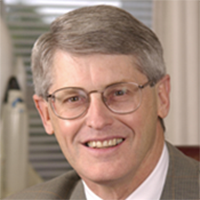 Tired of the high altitude problems posed by the Rockies, the Spotlight turned its beam east this month, falling on Hampton, Virginia, and illuminating David A. Throckmorton, AIAA Fellow, and Vice President of Research at the National Institute of Aerospace (NIA).

As the Vice President of Research at NIA, Throckmorton is responsible for executive management of the NIA’s research portfolio, performing work that supports efforts at NASA Langley Research Center as well as research programs for the Federal Aviation Administration, the Army Research Laboratory, and other federal and commercial clients.

From 2008 to 2012, Throckmorton worked as an independent aerospace and management consultant, working with many customers including Earth Resources Technology Inc., NIA, National Security Technologies LLC, Northrop Grumman Technical Services, and URS Federal Services. He provided an array of strategic planning services as well as proposal development support for those companies seeking business with NASA and the U.S. Air Force. Throckmorton chaired NASA’s Independent Standing Review Board for the Orion Project from 2007 to 2008, overseeing the committee’s independent review and assessment of the technical and programmatic status of the project.

As Deputy Director of NASA Stennis Space Center from 2003 to 2007, Throckmorton was responsible for coordination of NASA’s rocket propulsion tests capabilities, including ground testing of the Space Shuttle’s main engines. He also oversaw the center’s involvement with NASA’s applied science program, and managed relations with the center’s thirty-plus resident federal, state, academic, and commercial enterprises.

From 2000 to 2003, Throckmorton was Deputy Director of Engineering at NASA Marshall Space Flight Center. In that position, he led a multidisciplinary workforce engaged in engineering design, analyses, development, and testing in support of the broad array of NASA space flight programs, including Space Shuttle main engines, external tank, and solid rocket boosters and International Space Station environmental control and life support systems.

From 1994 to 2000, he was Manager of the Space Transportation Programs Office at NASA Langley Research Center, overseeing the center’s involvement in technology development and technical support for the Space Shuttle program, X-33 and X-34 flight test demonstrator projects, and NASA’s advanced Space Transportation Technology Program. From 1984 to 1994, Throckmorton served as the Assistant Head of the Aerothermodynamics Branch at NASA Langley, where he managed the branch’s efforts to develop advanced technologies in the area of hypersonic aerothermodynamics, including hypersonic wind-tunnel testing, state-of-the-art computational fluid dynamics simulations, and the conduct of entry flight experiments.

In 1988 and 1989, Throckmorton served as Director of Base Technology in the National AeroSpace Plane Joint (NASA/Department of Defense) Program Office, where he managed the program’s technology maturation element, including advanced propulsion, structures and materials, aerothermodynamics, and vehicle flight control technologies across multiple NASA centers and U.S. Air Force Laboratories. Throckmorton began his career with NASA as a cooperative education student in 1966.

Throckmorton became involved with AIAA at the national level as a member, and subsequently chair, of the Thermophysics Technical Committee. He served on the AIAA Board of Directors from 1994 to 2004 in various leadership roles, including Director–At-Large; Director–Technical, Aerospace Sciences; and Director–Technical, Structures Design and Test. He currently serves as a member of the Honors and Awards Committee. Additionally, he was a member of the AIAA Hampton Roads Section Council from 2012 to 2015. Throckmorton has received the Presidential Rank of Meritorious Executive from the U.S. Office of Personnel Management, a NASA Outstanding Leadership Medal, a NASA Exceptional Service Medal, and an AIAA Sustained Service Award. He is the author of over 50 research publications.

We began our chat by discussing what inspired Throckmorton to think about aerospace as a career and if he had any significant influencers along the way. Throckmorton responded, “As a young person growing up in West Virginia, I observed military blimps flying overhead, being delivered from the factory in Ohio where they were constructed to military installations on the East Coast. Later, in my high school years, I was witness to our nation’s first forays into space: selection of the original seven astronauts, and our early manned spaceflight programs of Projects Mercury and Gemini. I wanted to be a part of that adventure.”

When I asked about his favorite career memories, Throckmorton noted, “Having been involved, through hypersonic wind tunnel testing, in development of the configuration and definition of the thermal protection requirements of the Space Shuttle Orbiter, the successful first flight of the Shuttle Orbiter Columbia was clearly a career highlight.” He added, “Other career moments that I remember most fondly all relate to those times when my career took a turn, and I stepped up to new challenges. There is nothing more rewarding than to take on new responsibilities, outside of one’s comfort zone, that require learning and growth.

To be successful in such circumstances brings one a great sense of accomplishment and personal satisfaction.” For students pursuing an aerospace degree or for those still in high school thinking about majoring in aerospace, Throckmorton had this advice: “For those young people just starting their educational journey, I would simply recommend that they follow their passion, whatever that might be. If it is aerospace, I highly recommend that they seek out opportunities for cooperative education or internship programs that will enable them to get a taste of the real-world challenges and applications of the academic materials they will be studying. Such programs will provide them with a critical understanding (and appreciation) for the application of their academic pursuits, and will also serve to enhance their attractiveness to potential employers.”

I also asked Throckmorton about his advice for young professionals, and he relayed, “I would encourage them to get actively engaged in the activities of their local section of AIAA (or other professional organization); and to seek opportunities to participate in regional and national conferences. Through such activities, over time, they will find themselves developing an ever-expanding network with other professionals in our industry that will prove to be invaluable to their future career development.”

Throckmorton then described to me a little about NIA’s role in the aerospace community and what types of projects the Institute is currently working on: “NIA is a nonprofit research and graduate education organization created by a consortium of universities (and AIAA) some 14 years ago, in response to a call from NASA Langley Research Center. Today, NIA researchers, university faculty, and contract partners perform cutting-edge research across a broad spectrum of aerospace technologies. NIA’s research portfolio includes advanced materials and structures (including nanomaterials), computational fluid dynamics, aeroacoustics, atmospheric sciences, planetary sciences, autonomous systems, unmanned aerial systems, integrated vehicle health management, etc.”

I closed our interview by asking Throckmorton to gaze into the crystal ball of aerospace and tell us what breakthroughs we might see over the next ten to 15 years. He foresees three things: revolutionary advances in the autonomy of air transport vehicles, revolutionary advances in the energy efficiency of air transport vehicles, and an explosion in the economic development of space by the commercial space sector.

AIAA congratulates David Throckmorton on his selection as the June 2017 Spotlight subject, and wishes him the best as he continues to lead research efforts at NIA, as well as for his service to AIAA.