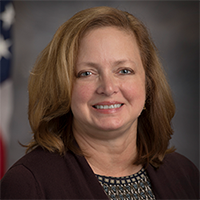 With NASA Langley Research Center having celebrated its 100th anniversary in July, the Institute thought it appropriate and timely to select Melissa B. Rivers, a longtime staff member at the center and one of its key contributors, as its July-August 2017 AIAA member spotlight subject. Rivers, a research aerospace engineer at NASA Langley, is a senior member of AIAA, having initially joined in 1988 while a sophomore at Mississippi State University. She has been a member of the AIAA Ground Testing Technical Committee since 2015.

Recognized for her vision and leadership, Rivers has supported numerous research projects and teams since joining NASA Langley in 1991, including the High Speed Research Program, the CFD Buffet Onset Team, and the High Reynolds Number Skin Friction Scaling Team. She has also led numerous tests in the U.S. National Transonic Facility wind tunnel.

In recognition of this groundbreaking work, Rivers, Vassberg, and Wahls were named joint recipients of the 2017 AIAA International Cooperation Award. The award honored the trio’s “vision, leadership, and implementation of the NASA Common Research Model (CRM) advancing United States and international aeronautical research collaboration on industry-relevant challenges in open forums.”

When asked what influenced her early in her life to pursue an aerospace engineering career, Rivers said that ever since she can remember her focus was on space, including maybe even the opportunity to “travel [there] one day.”

Describing the moment she knew she wanted to work in the aerospace field, Rivers said that as a child, while boarding a tour bus at Kennedy Space Center, her mother informed the tour bus driver that Rivers wanted to become an astronaut. The bus driver told Rivers that it wouldn’t be possible because she wore glasses. As Rivers explained, “that’s all it took for me to be determined to do whatever it took to at least work for NASA.” When Rivers was in high school, she investigated what college majors might best set her up for an opportunity to work for NASA, explaining that this was when she “discovered aerospace engineering and decided that is what I wanted to study.”

Rivers first became involved with AIAA during her sophomore year at MSU, after one of her professors encouraged students to join the student branch. Rivers noted that her professor “really believed in the networking aspect of [AIAA] membership.”

Asked about her motivation for focusing on the creation of the CRM for NASA, Rivers explained that until the introduction of the CRM, “computational fluid dynamicists had only been able to validate their results using very limited resources due to the proprietary nature of the models that had been tested,” noting that the CRM came to fruition as a solution to this challenge.

Rivers further explained that the CRM was “designed such that none of the geometry was restricted in any way which meant that all the data from any wind tunnel tests performed on this geometry would be freely available to anyone worldwide to use,” adding that “the geometry itself is also available for use by anyone to use in their computations for any purpose they desire.”

Rivers said that the CRM concept was initially discussed at an AIAA conference in 2007, and that an AIAA paper describing the initial plans for “the geometry and testing was presented in 2008,” with completion of the wind tunnel model occurring in 2009. Rivers noted that the biggest challenge during the first test of the model conducted in the National Transonic Facility in 2010 was “reassuring people that the data and geometry is actually freely available.”

Pointing out the primary benefits that the CRM provides, Rivers explained that the “availability of the data … has led to comparison of data between facilities that in the past would have only shared a very limited dataset of their testing.”

Touching upon the CRM website she created, Rivers said that she set it up specifically to provide “anything related to the CRM to anyone interested – geometries, data sets from wind tunnel tests, publications involving the CRM and much more,” while noting that data continues to be added to the website each month as “new uses for the CRM are being investigated.”

Rivers not only enjoyed leading tests of the CRM in the National Transonic Facility and the Ames 11 foot wind tunnel in the United States, but also appreciated the opportunity to participate “in tests of the CRM or CRM derivatives at the European Transonic Windtunnel,” located in Cologne, Germany, the ONERA S1MA tunnel, located in Modane, France, and the NRC 3 meter x 3 meter trisonic tunnel, located in Ottawa, Ontario, calling the chance to witness how wind tunnels across the world operate “very rewarding.” She maintained that “both the similarities and the differences are very important.”

Reflecting upon the positive impact of AIAA membership on her career, Rivers said that the afforded collaboration and connections have “been invaluable, especially in the CRM project,” particularly the opportunity to meet with colleagues at AIAA forums who are interested in different aspects of the CRM.

When asked what more should be done throughout industry to inspire more women and underrepresented groups to enter the field of aerospace engineering, Rivers, while noting that much progress has been made in this area, believes that even more can be done to reach students, especially “when they are younger.” She asserted that industry mentors “must show students that they can do well in STEM fields when they are in elementary school,” so that “maybe they will have the confidence to pursue these fields when they are older.”

Asked to briefly reflect upon the NASA Langley Research Center’s centennial year, Rivers said that nowadays she thinks a lot “about how far aerospace engineering has come in the last 100 years and what would the pioneers of aerospace think about how far we have come.” She wondered if they would “marvel or would they think we could have done more?”

Suggesting what aerospace may produce in the next 100 years, Rivers predicted flying cars, humans living on Mars, and other “things we haven’t even conceived of yet.”

AIAA is proud to have named Melissa B. Rivers as its July-August 2017 member spotlight subject, congratulates her on her 2017 selection as a co-recipient of the AIAA International Cooperation Award, and wishes her all the best in her continued pursuit of the advancement of key aerospace technologies, and ultimately humankind’s quest to explore deep space.