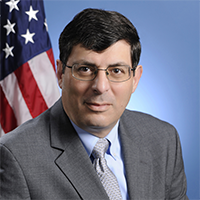 June 28, 2019 – Reston, Va. – The American Institute of Aeronautics and Astronautics (AIAA) applauds the appointment of Chris Scolese to the position of Director of the National Reconnaissance Office.

“Chris Scolese’s unique combination of technical knowledge, military service, and management experience make him the ideal director for this critical security post,” said Dan Dumbacher, AIAA executive director. “I’ve known him since 2007 and worked closely with him for more than 10 years during my time at NASA. He is a consummate professional with unmatched integrity.”

Scolese has been the director of NASA Goddard Space Flight Center since 2012. He worked in several positions at NASA, primarily in the Earth sciences missions.

Scolese joined AIAA when he was a sophomore in high school. He has been recognized with numerous awards, including the National Capital Section Young Engineer/Scientist of the Year Award, National Capital Section Barry M. Goldwater Educator Award, and the von Kármán Lecture in Astronautics Award. In 2008, he was elected by his peers as an AIAA Fellow—a rank which fewer than five percent of our members achieve.

About AIAA
The American Institute of Aeronautics and Astronautics (AIAA) is the world’s largest aerospace technical society. With nearly 30,000 individual members from 85 countries, and 97 corporate members, AIAA brings together industry, academia, and government to advance engineering and science in aviation, space, and defense. For more information, www.aiaa.org, or follow us on Twitter @AIAA.