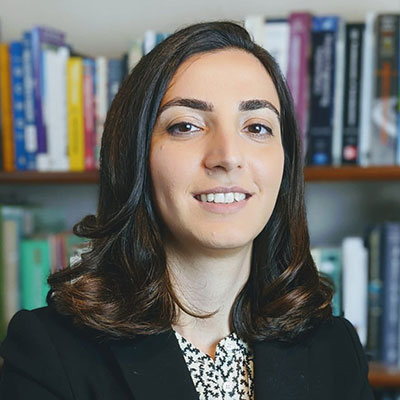 As well as her teaching and supervising PhD. and MSc. students, Bahareh leads the research in electric power distribution within the FutPrInt50 project (Horizon 2020), which aims to advance the state of the art by identifying and developing technologies that will accelerate the entry-into-service of a commercial hybrid-electric aircraft.

Bahareh leads research in high temperature sensing, in particular temperature sensing of turbine blades and nozzle guide vanes. Herself and her team are designing and testing new acoustic sensors as part of a project funded by the LIoyd’s Register Foundation and the International Consortium of Nanotechnologies.

Prior to joining Cranfield University in September 2020, Bahareh was a Research Fellow at the School of Electronics and Computer Science, Faculty of Physical Sciences and Engineering at the University of Southampton, UK, where she has worked on several research projects. These projects include: Intelligent Integrated Bearing Systems (Horizon2020, Clean Sky 2, I2BS), European Infrastructure Powering the Internet of Things (Horizon2020, EnABLES), and Wearable and Autonomous Computing for Future Smart Cities (EPSRC). Bahareh has conducted research related to the design of high temperature amplifiers, self-powered wireless sensors, and processors. Bahareh has contributed to developing novel signal processing algorithms to identify failure modes in bearings. These algorithms were incorporated into a smart bearing sensing system, which consists of a thermal energy harvesting system, a switched reluctance rotational energy harvester, and high temperature embedded processors, wireless data transmission, amplifiers, and power management circuits. The resulting bearing system was developed in collaboration with Safran Aircraft Engines and Schaeffler Group.

Bahareh has been a principal investigator on cycling with an intelligent communication link (CICL) (part of EPSRC Wearable and Autonomous Computing for Future Smart Cities), andwith her team they designed a novel electric motor based on a switched reluctance machine for a smart bicycle. As part of this project, they developed mobile pollution sensing, and wearable wireless power transmission systems.

Bahareh is a member of the American Institute of Aeronautics and Astronautics (AIAA). Within AIAA, she serves as the Publications Committee chair for the 2021 AIAA/IEEE Electric Aircraft Technologies Symposium. She is also a member of IET and IEEE. Bahareh was nominated by the staff and students in 2019 and received WISET+ ward for her contributions in supporting students and teaching.