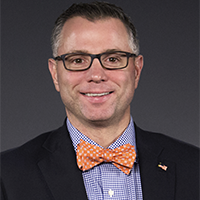 Dr. Jonathan W. Cirtain is vice president and chief technology officer of BWX Technologies, Inc. (BWXT). In this role, he is responsible for the identification and development of new technologies for the company, integrating expertise and resources across the enterprise. He joined BWXT as director of Commercial Technologies in 2017, most recently serving as president of BWXT Advanced Technologies LLC.

Dr. Cirtain co-founded Astraea, Inc. – a small business created to design and develop a platform for machine learning and data science analytics utilizing Earth-observing satellite and in situ data sources. He served as the organization’s chief scientist and technologist.

Prior to his entrepreneurship, Dr. Cirtain spent nine years with NASA, beginning his career as an astrophysicist and holding positions of increased responsibility at the Marshall Space Flight Center. He concluded his tenure with the agency as the manager of the Science Research Office, overseeing a staff of nearly 170 scientists and contractors in applied science and technology development.

During his time with NASA in 2010, Dr. Cirtain received the most prestigious honor given by the U.S. government to scientists and engineers in the onset of their independent research careers – the Presidential Early Career Award for Scientists and Engineers.

Dr. Cirtain earned his Ph.D. in physics from Montana State. A graduate of the University of Memphis, he also holds bachelor’s degrees in physics and mathematics.