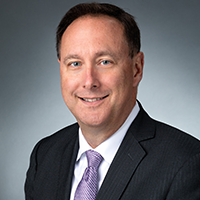 Robert Lightfoot is Vice President of Strategy & Business Development for Lockheed Martin Space. In this role, Robert is responsible for growing the Space business with a comprehensive strategy to develop new markets and keep programs sold. He also leads strategic planning, advanced technology concepts and new business acquisition efforts for each of the five lines of business.

Prior to joining Lockheed Martin, Robert served as the President of LSINC Corporation where he was responsible for leading innovative strategy assurance and product development to help clients achieve mission success.

His extensive knowledge in managing a federal agency through times of significant change allows him to develop strategies and eliminate barriers that can impact necessary change for any organization. Robert was the former Acting Administrator of the National Aeronautics & Space Administration (NASA). His permanent position at NASA Headquarters was Associate Administrator, the agency’s highest-ranking civil service position. He previously was director of NASA’s Marshall Space Flight Center in Huntsville, Alabama, one of NASA’s largest field installations, which plays a critical role in NASA’s space operations, exploration and science missions. He spent much of his Marshall career in rocket engine testing and space shuttle propulsion office. He also served as director of the Propulsion Test Directorate at NASA’s Stennis Space Center in Mississippi. After Stennis, two years were spent at NASA Headquarters focused on strategies for the shuttle return to flight following the Columbia tragedy, then initial transition and retirement efforts for shuttle infrastructure.

Robert received a bachelor’s degree in mechanical engineering from the University of Alabama where he is a Distinguished Departmental Fellow for the Department of Mechanical Engineering, a College of Engineering fellow, and served on the Mechanical Engineering Advisory Board. He was inducted into the State of Alabama Engineering Hall of Fame in 2010. He received numerous awards during his NASA career, including the Presidential Rank Award for Distinguished Executives, the highest honors attainable for federal government work, in 2006, 2010 and 2016.