Delta IV production occurs in Decatur, Alabama, in ULA’s state-of-the-art manufacturing facility. The Decatur facility has a diverse array of technical expertise and equipment that permits in-house fabrication and final assembly of the Delta IV boosters and the Delta Cryogenic Second Stage. The finished hardware is transported to the launch sites on the R/S Rocketship, a cargo vessel large enough to carry a full Delta IV Heavy launch vehicle. 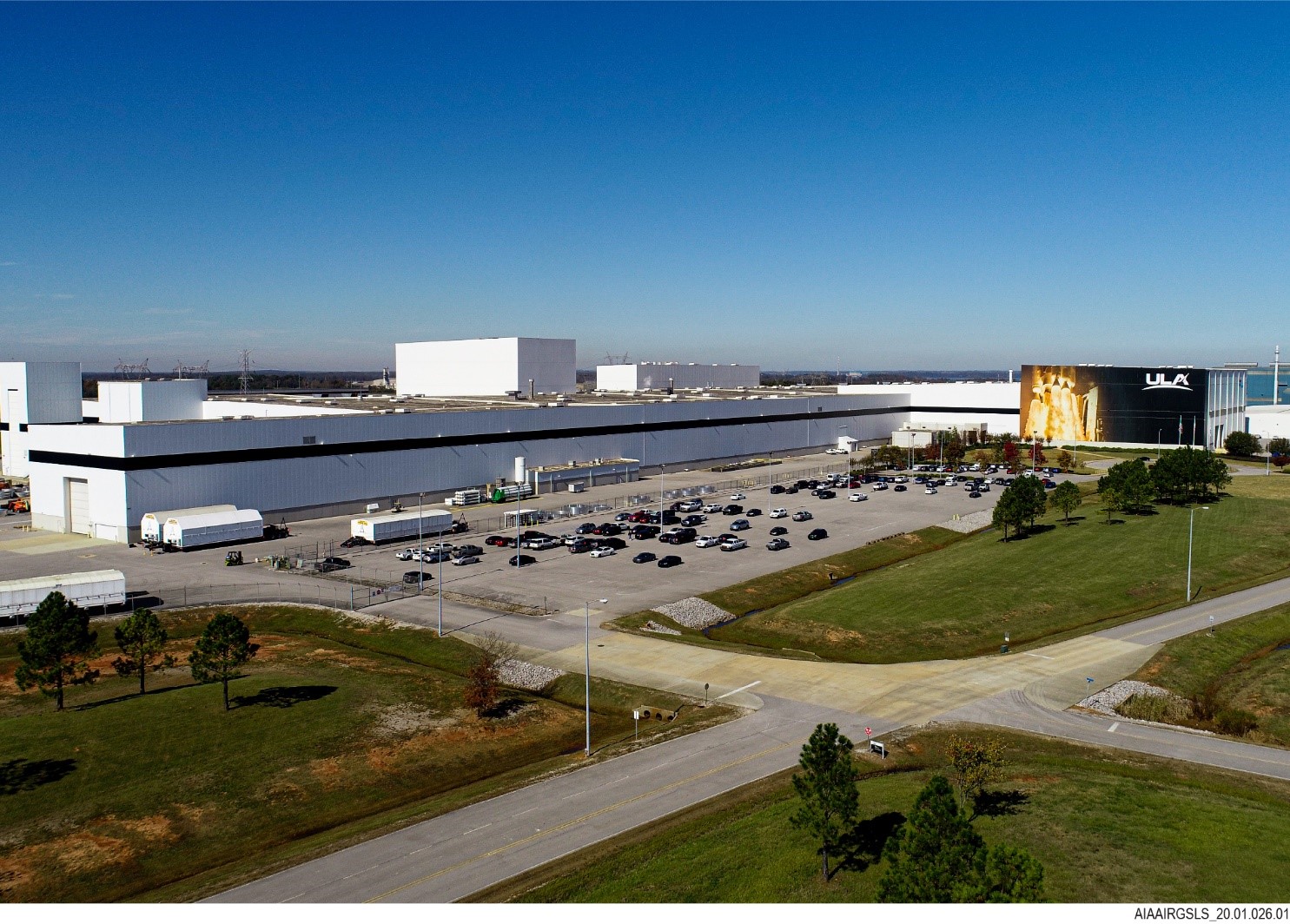 Delta IV launches at Cape Canaveral Air Force Station (CCAFS) are conducted from Space Launch Complex-37 (SLC-37). SLC-37 was originally built with two pads for launches of the Saturn I and IB in the 1960s and was then mostly dismantled. A new pad designed for all versions of Delta IV was built at the site of Pad B. SLC-37B includes a launch mount, a 73-m (240-ft) tall Fixed Umbilical Tower (FUT), a Mobile Service Tower (MST), two lightning protection towers, a propellant tank farm and various support buildings. The FUT has three large swing arms that connect to the first stage, second stage and payload fairing. Once the launch vehicle is erected on the launch pad, the MST moves into place around it. The MST moves on rails using a hydraulic drive system. Using a 45 t (50 U.S. ton) bridge crane, the encapsulated payload assembly (payload, adapter and fairing) is lifted into place on the launch vehicle. The MST includes work platforms for late access to the vehicle (particularly the interstage area) as well as the payload.

Delta IV vehicles are integrated horizontally in the Horizontal Integration Facility (HIF). The HIF has two bays, each 30.5-m (100-ft) wide and 76.2-m (250-ft) long, with a wide door on each end. The HIF can accommodate four single-core vehicles at a time, or one Delta IV-H vehicle in one bay, and two single-core Delta IV-M or M+ vehicles in the other. In the HIF, the stages are tested and checked out, then assembled together. The fully integrated launch vehicle, without the payload and fairing, is transported horizontally to the launch pad. 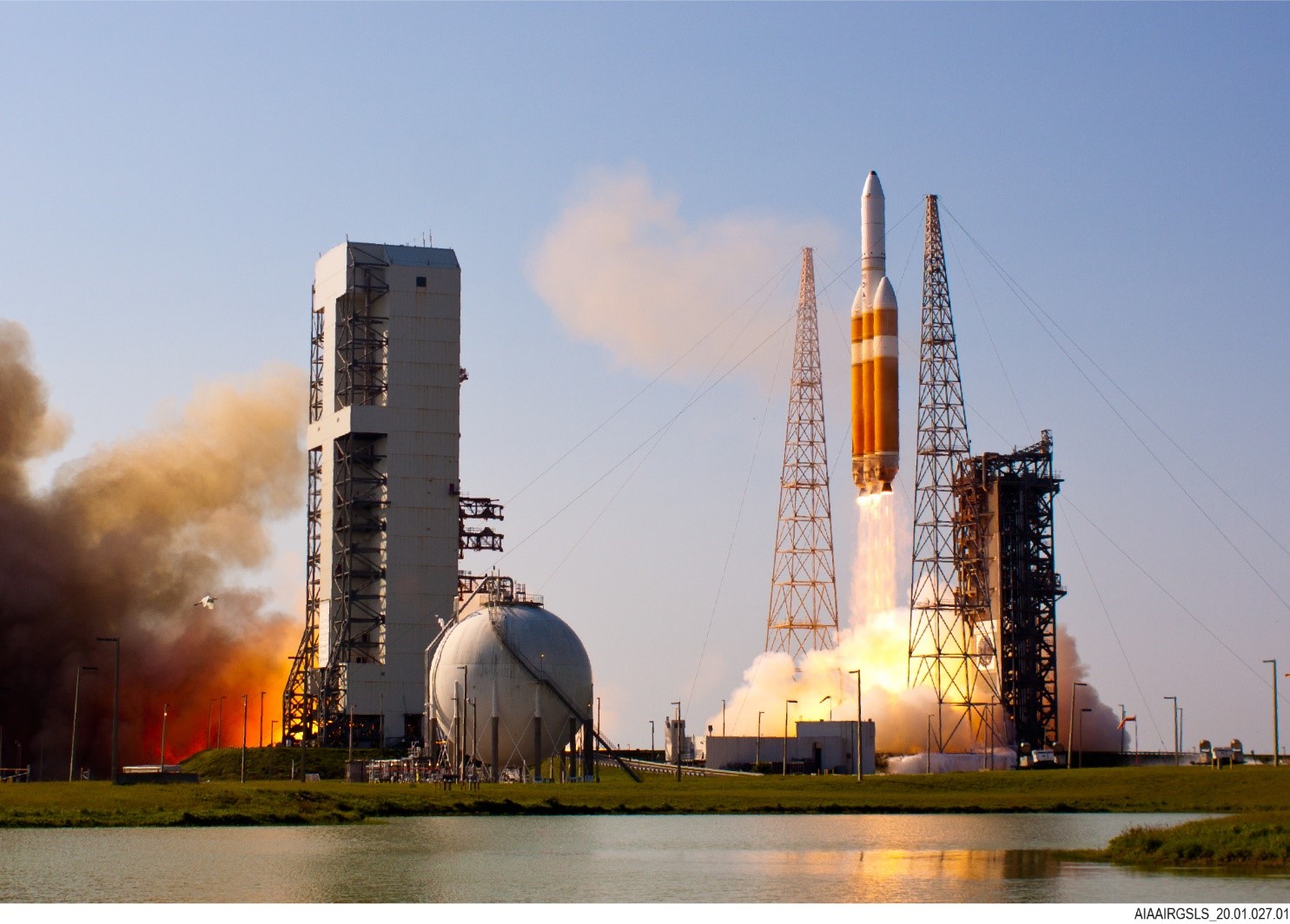 Delta IV launch facilities at CCAFS SLC-37B.  To the left is the retracted mobile service tower, to the right the fixed umbilical tower; the two lightning towers are on either side of the rocket.

West Coast Delta IV launch operations are conducted from Space Launch Complex-6 (SLC-6). SLC-6 was originally built in the 1960s to launch the planned Titan IIIM launch vehicle in support of U.S. Air Force (USAF) crewed space missions. These programs were canceled and SLC-6 mothballed. SLC-6 was then rebuilt to launch USAF Space Shuttle missions, but again the military Space Shuttle program was canceled before any launches took place. From 1995 to 1999, part of SLC- 6 was used as the West Coast launch site for the small commercial Athena launch vehicle.

An existing Space Shuttle processing building was modified into a Delta IV HIF with capabilities similar to the HIF at Cape Canaveral. The existing MST was modified with a raised roof to service the vehicle once it is mounted in place on the launch table. As at Cape Canaveral, payloads are encapsulated offline and lifted into place on the launch vehicle using the MST crane. 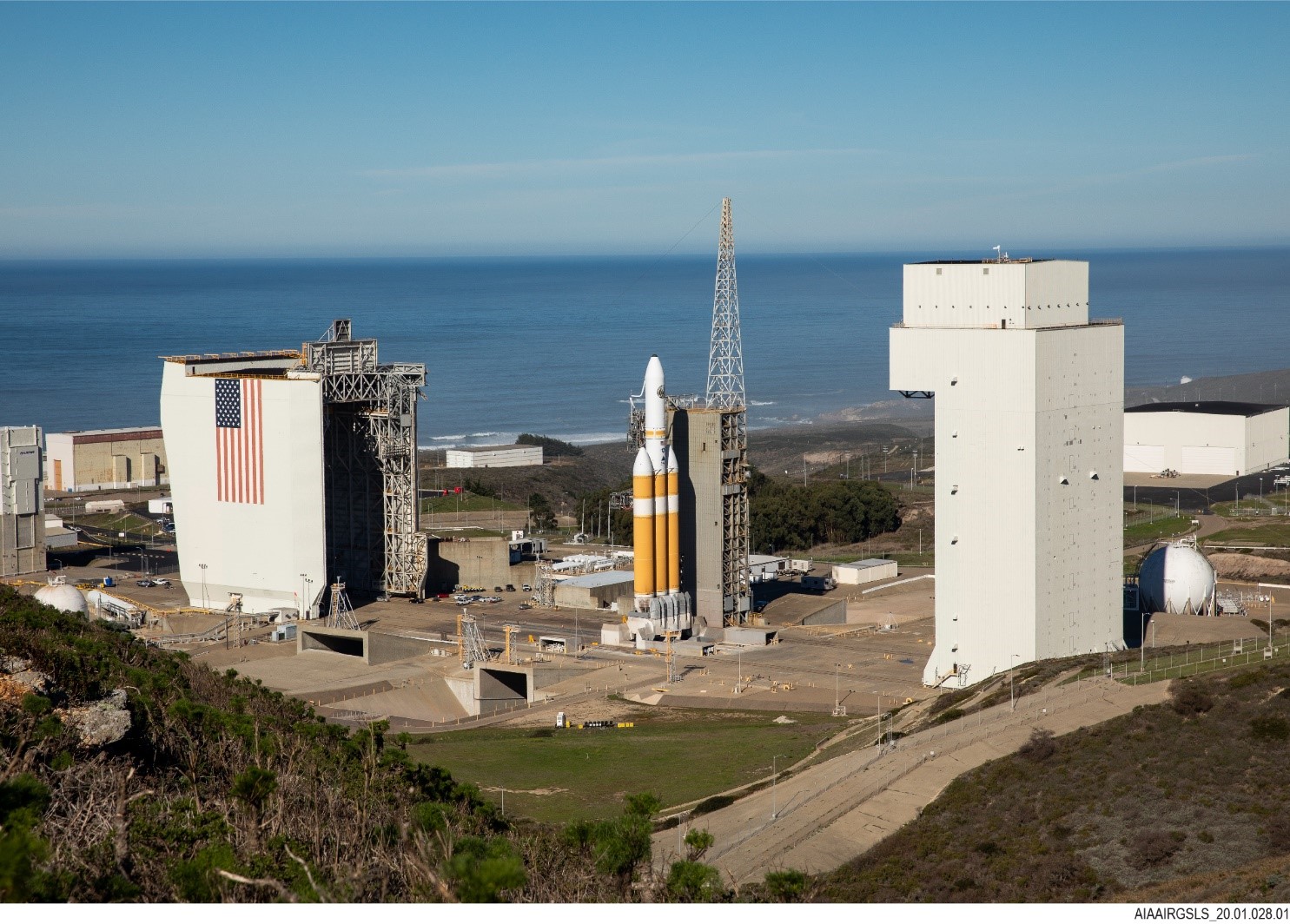 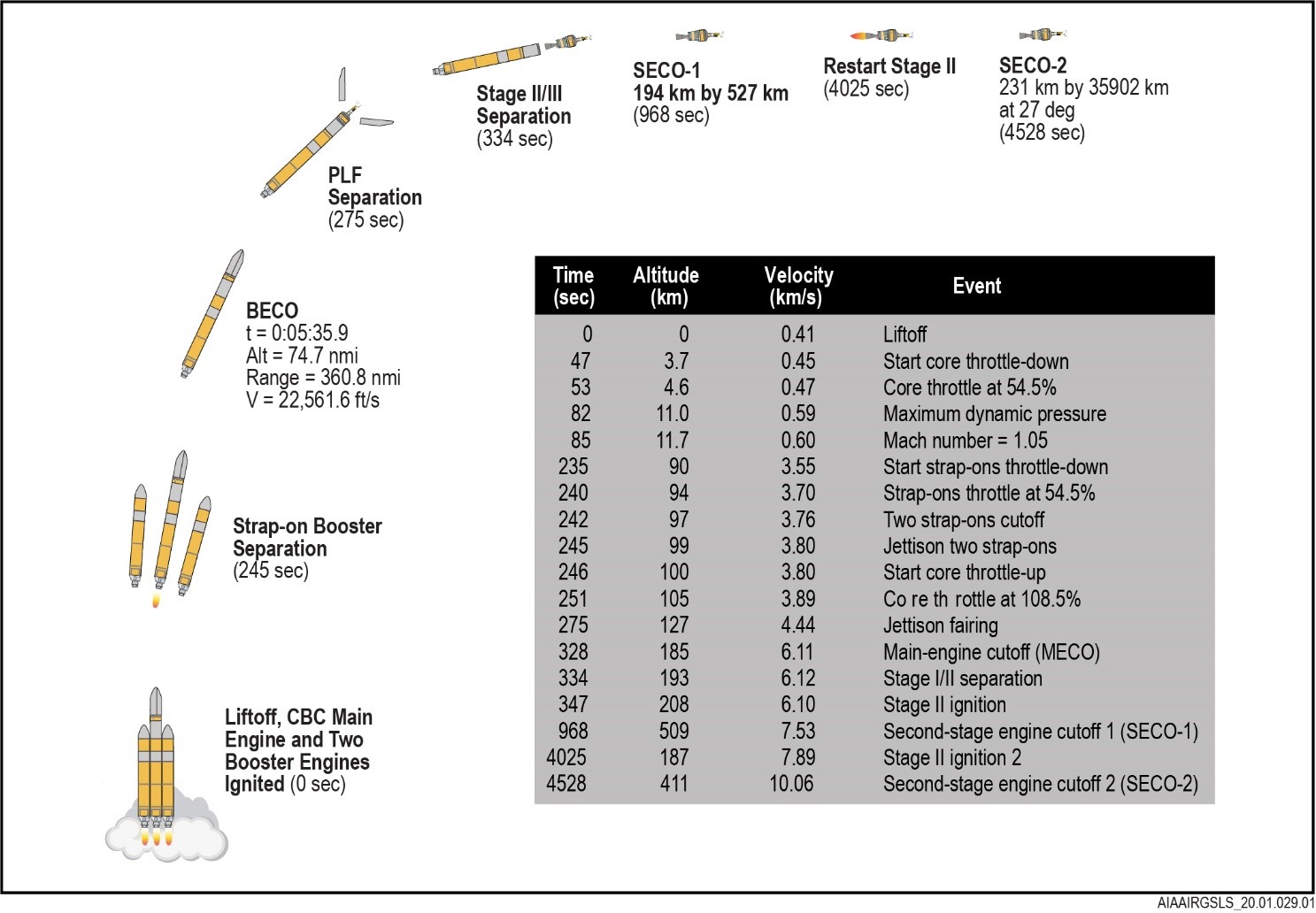 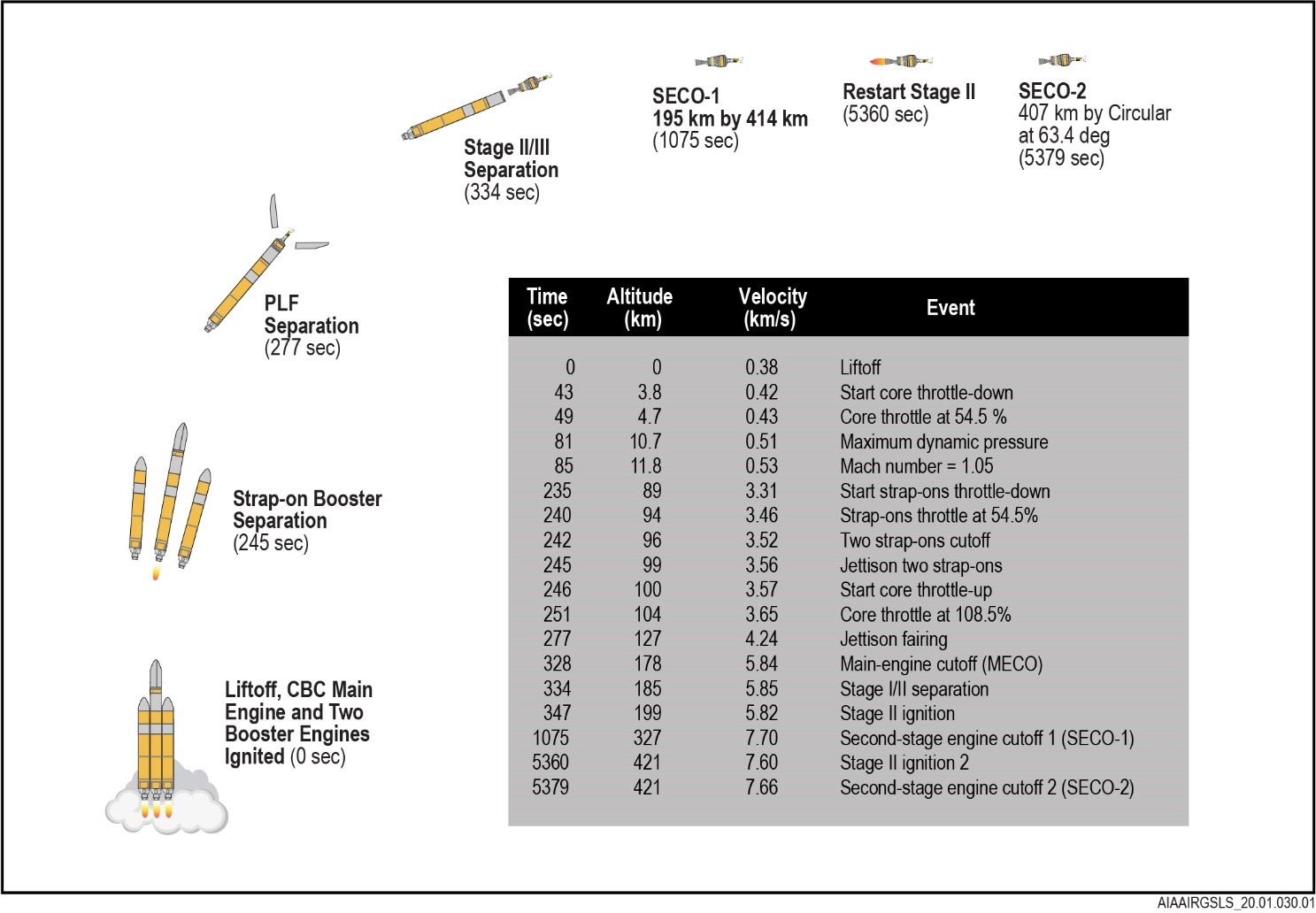 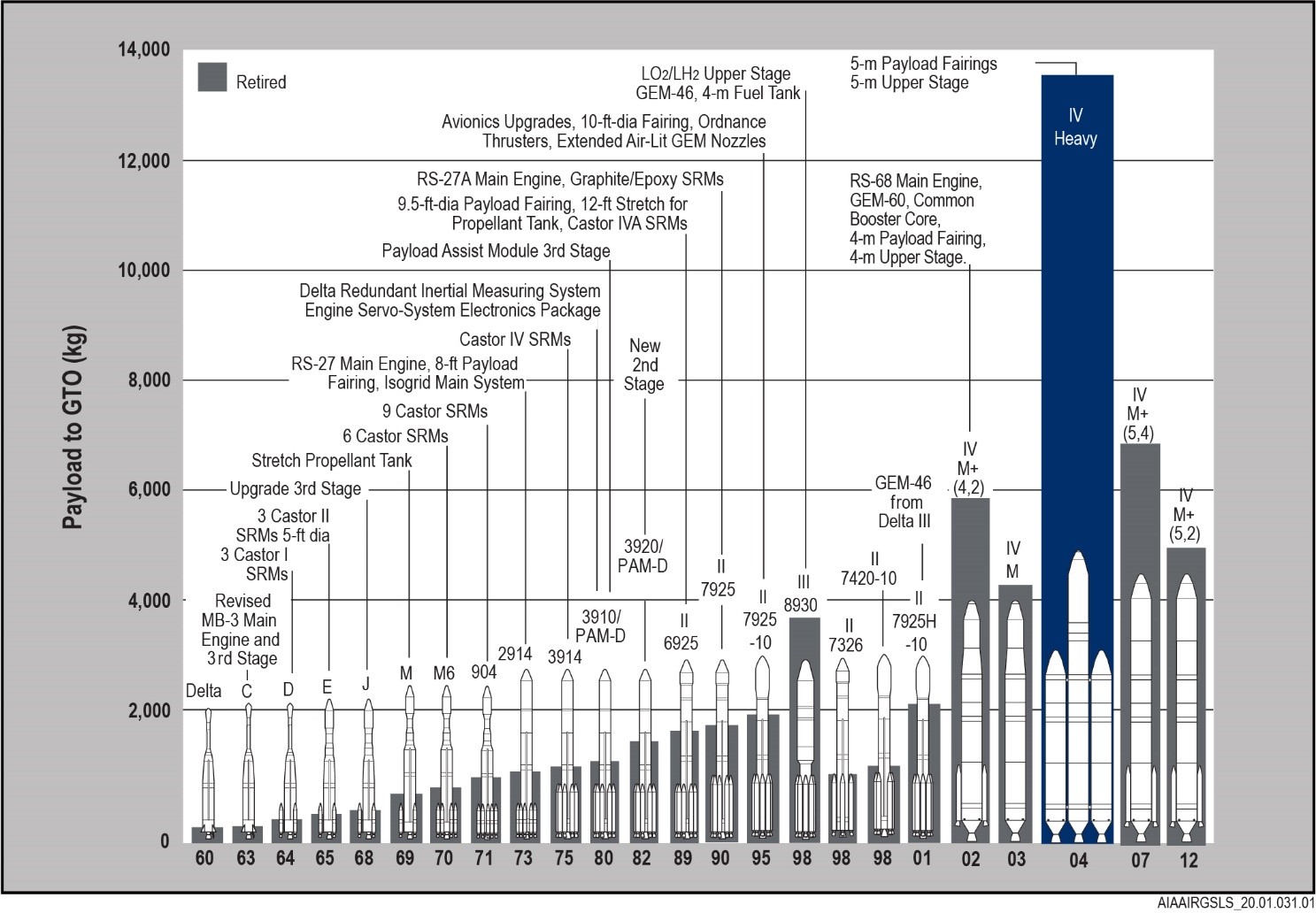 The Delta launch vehicle family originated in 1959 when NASA Goddard Space Flight Center awarded a contract to Douglas Aircraft Company, now part of Boeing, to produce and integrate 12 launch vehicles. The Delta, using components from the USAF Thor intermediate range ballistic missile (IRBM) program and the U.S. Navy Vanguard launch vehicle program, was available 18 months after go-ahead. On May 13, 1960, the first Delta launched from Cape Canaveral Air Force Station with a 81-kg (179-lbm) Echo I passive communications satellite. Although this first flight was a failure, the ensuing series of successful launches established Delta as one of the most reliable U.S. boosters. In the years since the first vehicles were produced, the Delta has evolved to meet the ever increasing demands of its payloads, including weather, scientific and communications satellites.

The 1960 Delta used a modified Thor booster with a Rocketdyne MB-3 engine as a first stage; the Vanguard second-stage engine, Aerojet's AJ10-118, on the second stage; and the Vanguard X-248 solid rocket motor (SRM) as the third stage. In 1962, the Delta A configuration evolved with an improved MB-3 engine on the Thor first stage, and then the Delta B added a lengthened second stage with a higher energy propellant. The Delta C configuration had a bulbous fairing and replaced the Vanguard-developed third-stage motor with the Scout-developed X-258 motor. In 1964, three Thiokol Castor I solid strap-on motors were used on the Delta D. The Delta E of 1965 showed three major changes: larger payload fairing from the USAF Agena stage, larger diameter propellant tanks and restart capability on the second stage, and replacement of the X-258 third stage with the USAF-developed FW-4. In addition, more powerful Castor II strap-on motors were used.

In 1968, the third stage again was changed to the Thiokol TE-364-3 motor on the Delta J configuration. Modifications in 1968 also included lengthening the first-stage propellant tanks and increasing the RP-1 tank diameter on the Delta L, M and N vehicles. These nearly identical configurations had different third stages—the FW-4, TE-36 and none, respectively. The M-6 and N-6 Deltas raised the number of solid strap-on boosters to six in the early 1970s, increasing performance by approximately 27%. In 1972, the number of solid strap-on boosters increased again from six to nine, and the Titan Transtage engine (Aerojet AJ-10-118F) replaced the original Vanguard second-stage propulsion system on the Delta 900.

In the early 1970s, eight variations of the 1000-series of Delta vehicles and the now familiar Delta nomenclature emerged. All eight configurations incorporated some first-stage changes but varied in the number of Castor II strap-on boosters and the type of third stage used (if any). The later 1900-series vehicles possessed a larger payload fairing—from 1.65 m to 2.44 m (from 65 in. to 96 in.). For example, the Delta 1914 had a larger payload fairing, the extended first-stage tank length, an isogrid structure in the first stage and a longer third-stage motor.

McDonnell Douglas developed five types of Delta 2000-series vehicles. These vehicles, primarily flown between 1974 and 1978, again differed in the type of third stage and the number of solid Castor II SRMs. Two major evolutions occurred with the development of these vehicles. First, the 2000-series vehicles no longer employed the Aerojet AJ10-118F second-stage engine. Instead, McDonnell Douglas opted for the TRW TR-201 engine (a modification of the descent rocket of the lunar module). Second, the MB-3 main engine was replaced by the more powerful Rocketdyne RS-27 engine.

The Delta configurations of the late 1970s and early 1980s were designated the 3900-series, principally the 3914 and 3910/PAM. The 3900-series is very similar to the 2900-series except the 2900 employed Castor II solid strap-on boosters, whereas the 3900 uses nine larger and more powerful Castor IV solid motors. Each Castor IV produced 378 kN (85,000 lbf) of thrust versus the 232 kN (52,200 lbf) of the Castor II. The new PAM was used as the third stage of the 3910/PAM vehicle. The PAM stage was based on the Star 48B motor and originally developed for the Space Shuttle to transfer satellites from a low Earth parking orbit to their final orbits.

In 1979, McDonnell Douglas realized that the transition to the Space Shuttle would take longer than anticipated. Not only did this mean that more Delta launches would be required, but the Delta configuration had to evolve to accommodate payloads designed for the higher capability of the Space Shuttle; therefore, the Delta 3920 was developed. The TR-201 second-stage engine was replaced by a new Aerojet engine designated the AJ10-118K. This engine was designed by Aerojet for the second stage of the Japanese N-II launch vehicle, using the Titan Transtage engine with larger tankage. The USAF also had funded a program to increase the performance of the Transtage injector known as the Improved Transtage Injector Program (ITIP). McDonnell Douglas decided to increase the 3920 performance with minimum risk by using the ITIP engine and the existing N-II stage tanks for the second stage.

The unprecedented string of launch vehicle failures that occurred 1985 through 1987 seriously impeded U.S. space launch capability. In one of several steps to revitalize this, the U.S. Air Force held a competition for a medium launch vehicle that primarily would launch the GPS satellites. The contract was awarded to McDonnell Douglas for their Delta II series vehicles, designated the 6925 and 7925. These configurations were growth versions of the 3920/PAM-D vehicles. In 1992, the 6920-series vehicle was phased out.

Demand for Delta launches increased significantly in the mid- and late 1990s. In addition to continuing GPS deployment missions, Delta was selected for a number of NASA payloads as a result of the agency’s focus on smaller, less expensive spacecraft. These include a series of missions to Mars beginning with Mars Pathfinder, missions to asteroids and comets, and satellites dedicated to Earth observation or astronomy. In 1994, NASA announced the Med-Lite program in which it planned to purchase smaller launch vehicles, described as “half a Delta for half the price. ” NASA selected the Delta 7300 and 7400 vehicles, which have fewer solid strap-on motors than the 7900 series. While somewhat larger and more expensive than the program goal, the new vehicles could be developed rapidly with minimal development cost and risk. The Delta II manifest continued to expand with numerous launches to deploy LEO communications constellations such as Iridium and Globalstar. However, McDonnell Douglas realized that commercial GEO satellites were rapidly growing too heavy for Delta II to lift, and that a new vehicle was needed. In response, the Delta III was developed. The strap-on motors were expanded, and an all new cryogenic upper stage was developed, powered by the proven RL10 engine. Commercial satellite builders responded positively, with Hughes purchasing 10 launches (later expanded to 13), and Loral purchasing five flights. The first two Delta III flights ended in failure in 1998 and 1999. After two failures for paying customers, Boeing was forced to perform a demonstration launch with a dummy payload in 2000. The launch succeeded, but by that time a combination of factors including Delta III’s tarnished reputation, overcapacity in the launch market, and a growing number of spacecraft that were too heavy for Delta III to lift, made it difficult to sell any further launches. Marketing efforts were eventually abandoned in favor of the newer Delta IV. Delta III hardware, such as engines and solid rocket motors, was converted for use on Delta II and Delta IV.

The Delta IV was designed as part of the U.S. Air Force Evolved Expendable Launch Vehicle (EELV) program, which began in 1995. The Delta IV has a structurally stable first stage powered by the Aerojet Rocketdyne RS-68A engine.  The second stage is structurally stable hydrogen/oxygen vehicle powered with engines from the RL10 family. The first Delta IV flew in November 2002.  The Medium family consisted of a single-core vehicle with 4- and 5-meter fairings and 0, 2 or 4 GEMs. It flew 29 times, all successful, and has been retired. The Heavy vehicle consists of three cores strapped together and has flown 11 times.  In 2006 Lockheed Martin and The Boeing Company formed a joint venture, bringing the Atlas V and Delta IV vehicles together under United Launch Alliance.