Many of the design features of the Falcon 9 launch vehicle are driven by the desire for reliability and ease of operations. The vehicle is a two-stage design to minimize complexity and the number of staging events. LOX and RP-1 (kerosene) propellants were selected for their ease of handling and safety. Both stages are made of aluminum to eliminate the manufacturing and testing issues associated with composite materials. The empty vehicle is relatively lightweight and can be moved easily. The tanks are structurally stable and can be moved without pressurizing the tanks although pressurization is required to withstand loads in flight.

First Stage
Falcon 9’s first stage incorporates nine Merlin engines and aluminum-lithium alloy tanks containing liquid oxygen and rocket-grade kerosene (RP-1) propellant. After ignition, a hold-before-release system ensures that all engines are verified for full-thrust performance before the rocket is released for flight. The first stage engines are gradually throttled near the end of first-stage flight to limit launch vehicle acceleration as the rocket’s mass decreases with the burning of fuel.

Second Stage
The second stage, powered by a single Merlin vacuum engine, delivers Falcon 9’s and Falcon Heavy's payload to the desired orbit. The second stage engine ignites a few seconds after stage separation, and can be restarted multiple times to place multiple payloads into different orbits. For maximum reliability, the second stage has redundant igniter systems. Like the first stage, the second stage is made from a high-strength aluminum-lithium alloy.

The vehicle is a two-stage design to minimize complexity and the number of staging events. LOX and RP-1 (kerosene) propellants were selected for their ease of handling and safety. Both stages are made of aluminum to eliminate the manufacturing and testing issues associated with composite materials. The empty vehicle is relatively lightweight and can be moved easily. The tanks are structurally stable and can be moved without pressurizing the tanks although pressurization is required to withstand loads in flight.

Each of Falcon Heavy’s side cores, or boosters, is equivalent to the first stage of a Falcon 9 rocket with nine Merlin engines. At liftoff, the boosters and the center core all operate at full thrust. Shortly after liftoff, the center core engines are throttled down. After the side cores separate, the center core engines throttle back up.  Inside each of Falcon Heavy’s three cores is a cluster of nine Merlin engines.  These same engines power Falcon 9, enabling efficiencies that make Falcon Heavy the most cost-effective heavy-lift launch vehicle in the world. With a total of 27 first-stage engines, Falcon Heavy has engine-out capability that no other launch vehicle can match—under most payload scenarios, it can sustain more than one unplanned engine shutdown at any point in flight and still successfully complete its mission.

Second Stage
Falcon Heavy draws upon Falcon 9’s proven design, which minimizes stage separation events and maximizes reliability. The second-stage Merlin engine, identical to its counterpart on Falcon 9, delivers the rocket’s payload to orbit after the main engines cut off and the first-stage cores separate. The engine can be restarted multiple times to place payloads into a variety of orbits including low Earth, geosynchronous transfer orbit (GTO) and geosynchronous orbit (GSO).

Falcon avionics feature a flight-proven, three-string, fault-tolerant architecture that has been designed to human-rating requirements. Avionics include flight computers, Global Positioning System (GPS) receivers, inertial measurement units, SpaceX-designed and manufactured controllers for vehicle control (propulsion, valve, pressurization, separation, and payload interfaces), a network backbone, and S-band transmitters. The S-band transmitters are used to transmit telemetry and video to the ground, from both the first and second stages, even after stage separation.

The Falcon 9 and Falcon Heavy are equipped with an autonomous flight termination system to limit the potential damage caused by a launch vehicle malfunction. The system terminates the flight of the vehicle automatically if mission rules are violated.

Falcon 9 and Falcon Heavy can provide payload pointing and roll control during long-duration coast phases for sun avoidance and thermal control. If requested, the Falcon second stage will point the X-axis of the launch vehicle to a customer-specified attitude and perform a passive thermal control roll of up to ±1.5 deg/sec around the launch vehicle X-axis, held to a local vertical/local horizontal (LVLH) roll attitude accuracy of ±5 deg. 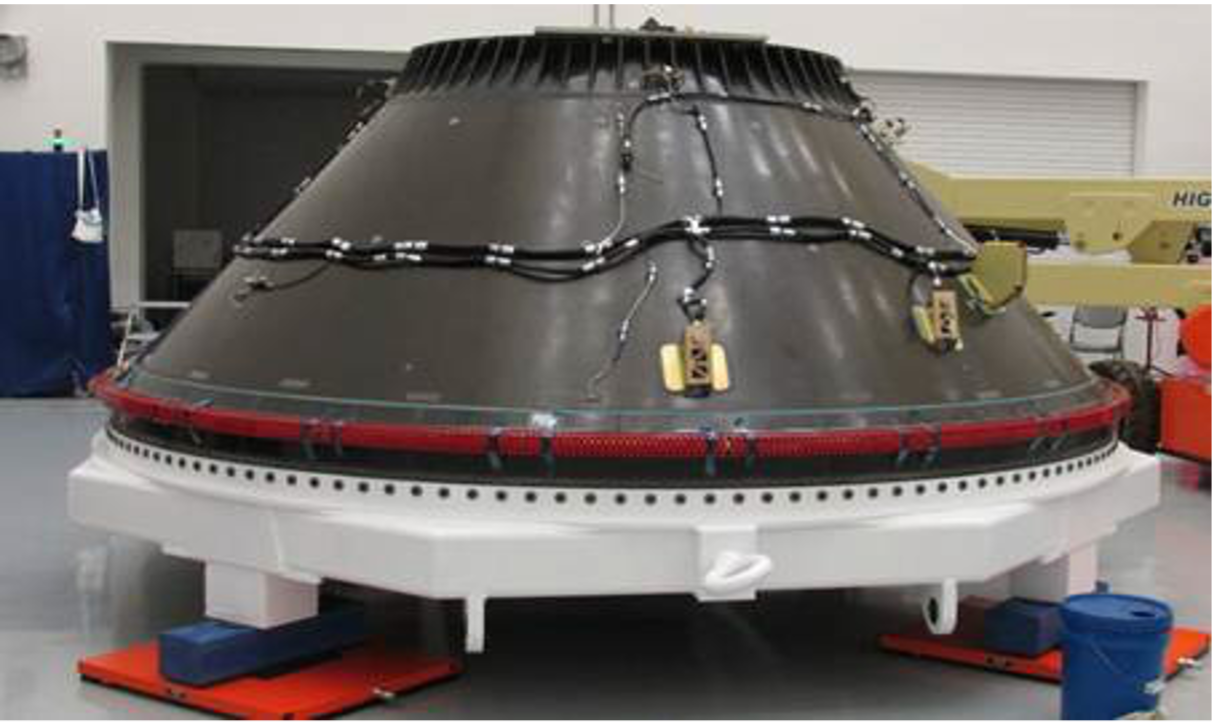 The payload attach fitting (PAF) converts the diameter of the launch vehicle to a (typical) standard 1575-mm (62.01 in.) bolted interface (Figure above). Payloads should comply with the mass properties limitations given in the figure below. Payloads in excess of the figure can be accommodated as a mission unique service. Payload mass properties should be assessed for all items forward of the payload attach fitting 1575-mm (62.01 in.) bolted interface, including any mission-unique payload adapters and separation systems. Mass property capabilities may be further constrained by mission-unique payload adapters, dispensers or separation systems. 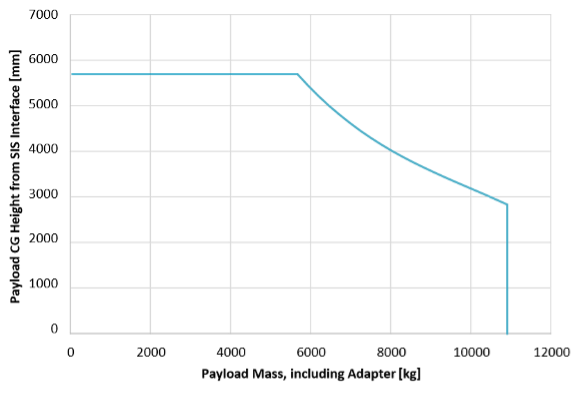 The payload volume indicates the volume that the spacecraft is allowed to move within, without intrusion to the fairing due to its dynamic motions.

A single through-fairing RF antenna (re-radiation) system is available as a standard service for use during payload antenna testing while on the launch pad. The service is provided for common command and telemetry frequencies. Contact SpaceX for further information on multiple re-radiation systems or non-standard frequencies. Through-fairing RF antenna (re-radiation) systems are not available for using during flight. SpaceX utilizes standard RF antennae locations on the SpaceX fairing and will work to clock the payload accordingly.

Combinations of acoustic surfaces are used inside the payload fairing to help achieve the acoustic environments specified below.