Proton is launched from the Baikonur Cosmodrome in Kazakhstan. Because Baikonur is a landlocked launch site, specific drop zones are reserved for the impact of the first stage, second stage, and payload fairing. These drop zones are typically about 310 km (190 mi) downrange for the first stage, and 1985 km (1230 mi) downrange for the second stage and payload fairing. Proton is therefore constrained to fly along one of three launch azimuths that are aligned with these zones. The basic three-stage Proton does not have an upper-stage restart capability, and therefore cannot reach orbits with perigees higher than approximately 200 km (108 nmi). To reach higher orbits or other inclinations, Proton delivers the payload plus an upper stage to a standard 180–200 km (97–108 nmi) circular support orbit. The upper stage or spacecraft propulsion system then performs orbit raising and/or plane change maneuvers. (While the azimuth restrictions limit performance, this approach does have the advantage of standardizing the trajectory and flight software of the lower three stages.)

Historically the Block DM upper stage has been used for most Proton K flights. Performance of the three-stage Proton configurations to typical support orbits is provided subsequently. Performance varies depending on the fairing separation time. Two separation times are available, each of which meets impact point restrictions. Payload fairing separation at 185 s results in higher performance than the 350 s separation time, but also exposes the payload to heating rates much higher than are standard for Western spacecraft. An intermediate time is used by Proton M to enable full performance for Western satellite missions. Performance for Russian government missions, which may use smaller payload fairings and the early fairing jettison time, can be higher than the commercial advertised performance. A comparison is shown below.

The Block DM is a LOX/kerosene-fueled stage with a capability for up to seven engine restarts (five have been demonstrated) and an on-orbit lifetime of 24 h, or longer with additional modifications. This allows the Block DM to deliver payloads directly to GSO or to coast for several revolutions in the support orbit for proper phasing and then deliver a spacecraft to GSO close to its planned longitude. Russian domestic satellites have generally been delivered directly to GSO, but commercial spacecraft are typically delivered to a GTO with the apogee and perigee optimized for the particular mission. For certain GTO orbits, a three-burn trajectory can be used in which the Block DM stage is delivered to a suborbital trajectory and performs its first burn to reach the parking orbit. This results in higher performance as shown subsequently. Performance is increased for certain domestic Russian missions by using the lighter Block D2 stage, which lacks the avionics compartment of the Block DM. This results in a performance improvement of approximately 800 kg (1750 lbm), but requires that the spacecraft be capable of controlling the stage. This configuration is used primarily for Russian planetary spacecraft.

The Block DM is also used for many Proton LEO missions (for example, on three Iridium deployment flights), to deliver the payload to the desired inclination and altitude. However, the Block DM has propellant loading constraints that impact its performance for LEO and other low-energy missions. A minimum of 11,500 kg (25,350 lbm) of propellant must be loaded onto the Block DM, even for missions that do not require this much capability from the stage. As a result of carrying this surplus propellant, the available payload mass is limited and is largely independent of altitude for LEO missions. Missions to higher altitudes simply burn more of the propellant load, leaving a smaller surplus.

The new Breeze M is a modified version of the Breeze KM upper stage developed for the Rockot space launch vehicle. Like the Block DM, the Breeze M is capable of 24 h of on-orbit operations and multiple restarts. However, the Breeze M main engine has a much lower thrust (and therefore a longer burn time) than the Block DM. As a result, the apogee raising maneuver for GTO missions is usually, but not always, split into two burns. The first puts the Breeze M and payload into an intermediate elliptical orbit, and the second raises the apogee to the planned altitude. 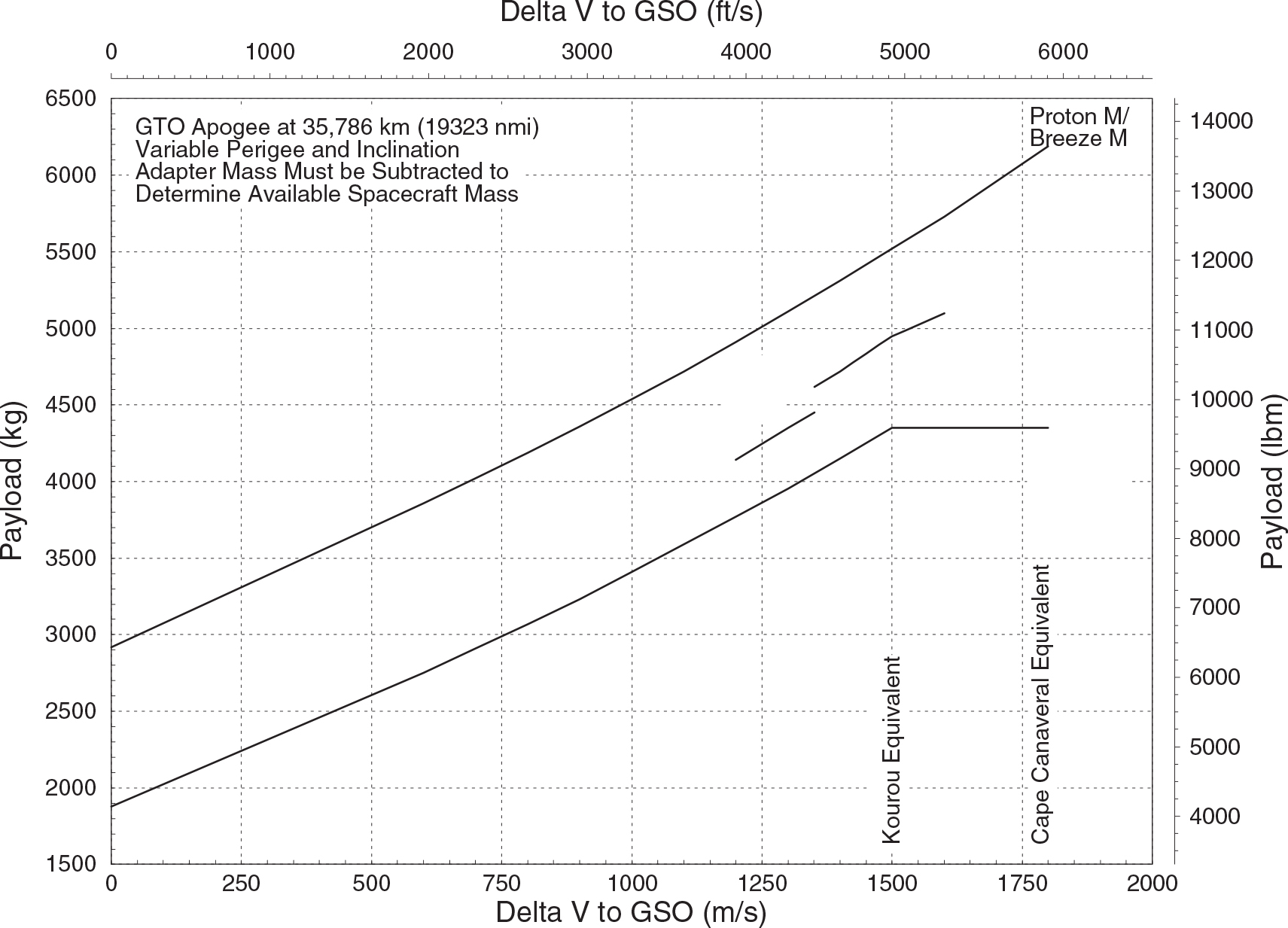