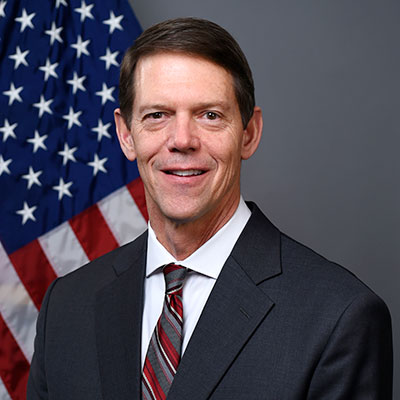 Dr. Douglas C. Blake heads the Aviation, Force Projection and Integrated Defense Department at the Office of Naval Research (ONR) in Arlington, Virginia. In addition, he is currently serving as the Acting ONR Executive Director. He is responsible for the Navy’s S&T investment in aircraft as well as air- and surface-weapons technology programs. He also oversees the Sea Strike Pillar Future Naval Capability initiative and leads Marine Corps-focused research investments in support of mobility, firepower, command and control, manpower and training, and logistics.

Dr. Blake entered the Senior Executive Service in 2014 and has served in multiple roles since then, including as the Program Director of the Federal Aviation Administration’s Logistics Center and as the Director of the Aerospace Systems Directorate of the Air Force Research Laboratory (AFRL). In addition, in 2020, Dr. Blake was dual-hatted in his ONR Department Head role while also serving as the Acting Deputy Director for Research, Technology and Laboratories in the Office of the Under Secretary of Defense for Research and Engineering.

Blake served 20 years in the active-duty Air Force as both enlisted and officer in a variety of positions including Korean Cryptologic Linguist, Intercontinental Ballistic Missile maintenance engineer, Air Force Research Laboratory (AFRL) researcher, and Associate Professor of Aeronautics at the U.S. Air Force Academy. Upon retiring in 2002, he entered the private sector where he worked as the Director of Research and Development for a small business involved in modeling and simulation.

Blake received his bachelor’s degree in aerospace engineering from the University of Missouri, Rolla; master’s and doctorate degrees in aeronautical engineering from the Air Force Institute of Technology; and a master’s degree in engineering management from the University of Colorado, Boulder. He is a graduate of the U.S. Air Force Air War College via correspondence and holds professional certifications in Systems Planning, Research, Development and Engineering, Level III; Program Systems Engineering, Level III; and Test and Evaluation, Level I.