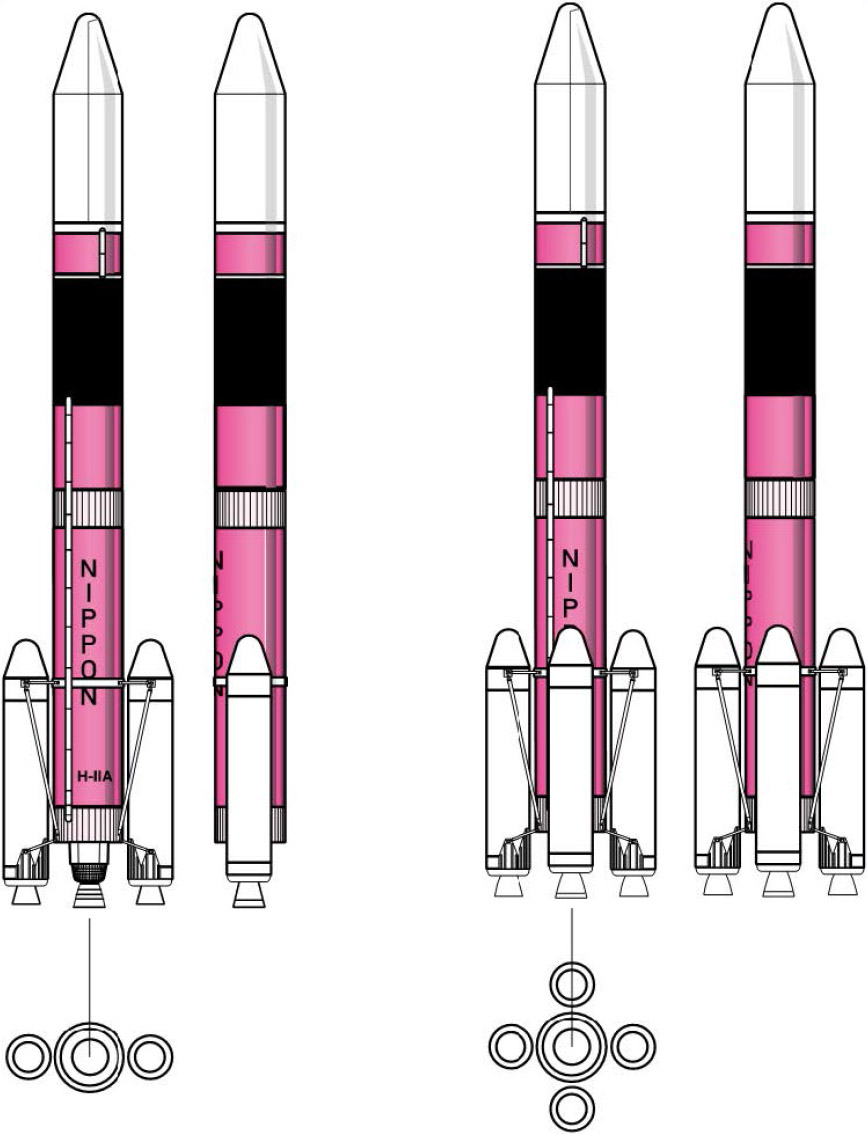 While the primary stages of the H-IIA use LOX/LH2 propellants, much of the liftoff thrust is provided by a pair of solid rocket boosters (SRBs). SRBs were selected because they provide high thrust in a much smaller system than could be achieved with hydrogen. The H-IIA booster, designated SRBA, incorporates several improvements over the SRB used on the original H-II. It is a shorter, monolithic motor, which simplifies handling and improves reliability. The motor casing is a filament-wound composite structure using technologies from ATK Thiokol, which reduces weight and permits a higher chamber pressure. The nozzle is smaller and is gimbaled using an electromechanical system rather than the hydraulic system of the original SRB. For larger payloads, the H-IIA can add two or four smaller solid strap-on boosters (SSBs), which are ATK Thiokol Castor IVAXL motors. For even heavier payloads, a second pair of SRB-A motors can be added in place of the SSBs. 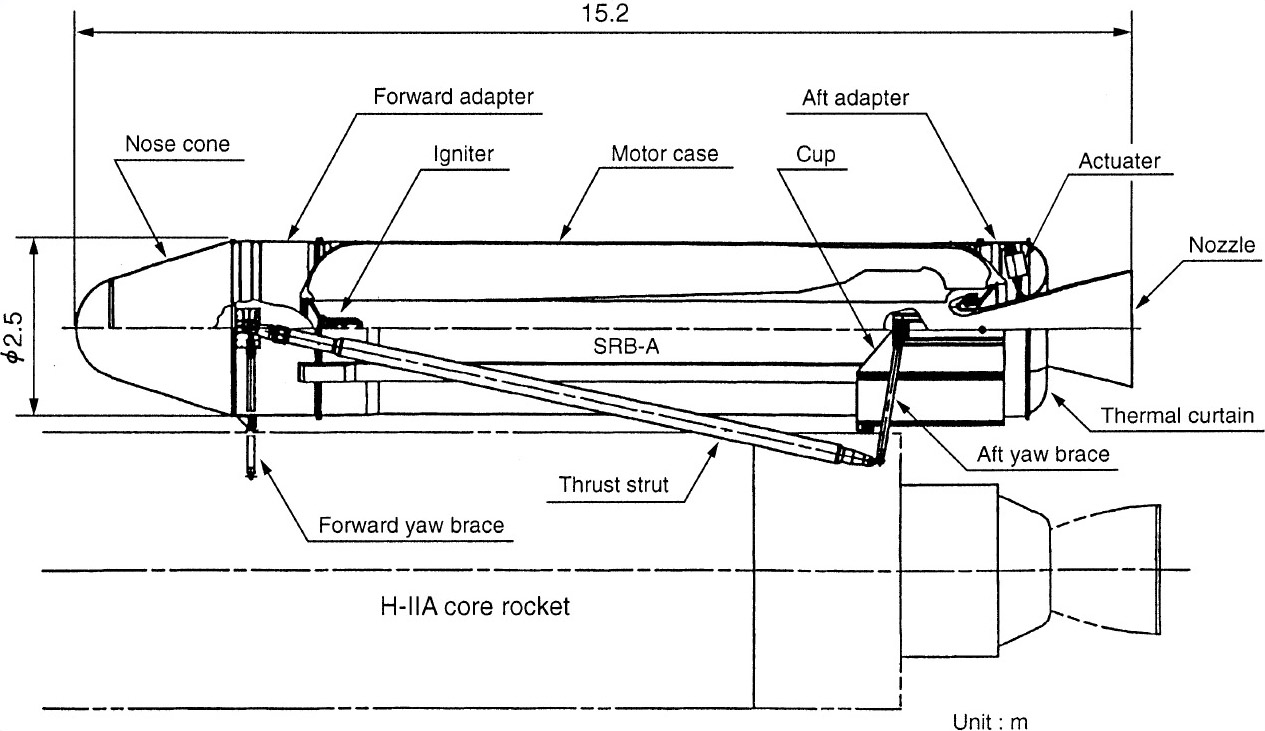 The major elements of the H-IIA first stage are the aluminum isogrid propellant tanks and the engine section with a single LE-7A LOX/LH2 main engine. The first stage is closely based on the H-II first stage, but includes a number of modifications to reduce production costs. The propellant tank domes are elliptical, single-piece, spun-formed units, in contrast to the hemispherical domes made from individual welded triangular gores on the H-II. This simplifies construction and provides more propellant volume with shorter tanks. Both tanks are covered with PIF insulation to prevent propellant boil off. Pressurization of the LOX tank is provided by an autogenous system that generates gaseous oxygen using a heat exchanger on the engine, replacing a much more complex cryogenic helium system used on the H-II. First stage avionics are contained in the center body section between the tanks. The interstage is a new carbon fiber composite design, replacing the old aluminum structure. It is clearly recognizable in photographs because it is black, not orange like the insulation on the propellant tanks. The LE-7A is a high-performance engine using a staged combustion cycle to achieve high chamber pressures. The LE-7A is derived from the LE-7 used on the H-II and has similar performance requirements but has a number of design changes to reduce costs and increase reliability. The LE-7A main engine operates at reduced preburner chamber temperatures permitting a simpler, less costly design at the expense of slightly reduced performance. The side-mounted turbopumps of the LE-7 are moved to the top on the LE-7A, making the engine longer but simplifying the plumbing. The number of engine welds on the LE-7 made it difficult to manufacture and caused explosive failures during testing, so the LE-7A is manufactured with advanced casting techniques to reduce the number of parts that must be welded. The LE-7A nozzle was designed with cooling tubes in the upper section only and a lower extension that is film-cooled. This design feature allows the lower extension to be removed to test low-throttle engine performance at sea level without suffering flow separation. However, during testing of the full nozzle it was discovered that ignition and shutdown transients could occasionally cause shocks at the joint of the two nozzle sections that were strong enough to damage the nozzle. As a result, the initial flights of H-IIA use a version of the LE-7A with only the upper section of the nozzle. The specific impulse is significantly reduced because of the lower expansion ratio. Work is in progress to develop a more robust version of the long-nozzle engine for future flights.

The second stage of the H-IIA consists of two independent propellant tanks for hydrogen and oxygen, an LE-5B engine, and an aft-mounted avionics shelf. The LE-5 series of engines date back to the upper stage of the H-I launch system. They are distinguished from the LE-7 engines by the use of an expander cycle instead of a staged combustion cycle. In the expander cycle, the turbopumps are powered by hydrogen heated in the cooling passages of the combustion chamber and nozzle, so there is no need for a preburner. In the LE-5B, the hydrogen is heated sufficiently by the combustion chamber alone, eliminating the need for channels in the nozzle skirt found on earlier engines. 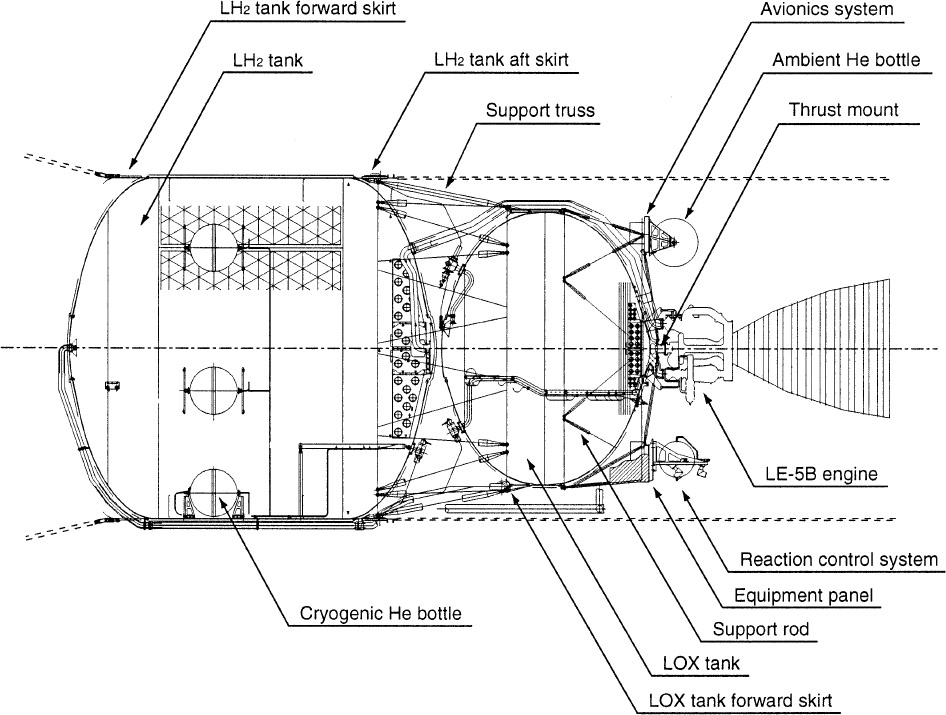 Attitude control during first-stage flight is provided using the nozzle gimbals on the main engine and the SRBs. The SRBs have a 5-deg gimbal capability using flexible nozzle seals and electromechanical actuators. The LE-7 main engine had a high-pressure hydraulic pump to provide continuous pressure for the gimbal actuators. On the LE-7A this is replaced by a simpler blow-down hydraulic system driven by pressurized helium. Nozzle gimbal angles up to 7 deg are possible. Following SRB separation, roll control of the first stage is provided by two tangential auxiliary engines, which generate approximately 1500 N (350 lbf) each using gases bled from the main engine preburner and nozzle cooling lines.

The avionics equipment panel is mounted on the bottom of the second-stage oxygen tank. This allows avionics to be integrated on the top of the panel, with propulsion system components such as the RCS system mounted nearby on the bottom of the panel. The vehicle is controlled by a triple-redundant guidance control computer on the second stage (GCC2) that communicates with computers on the first stage through a MIL-STD-1553B data bus. The GCC2 computes inertial position, velocity, and attitude using data provided by an IMU through the data bus. By comparing these data to the planned trajectory, nozzle gimbal angles and engine shutdown times can be calculated. During the first-stage burn, GCC1 uses data from the first-stage lateral acceleration measurement unit and the rate gyro package to overlay additional nozzle gimbal commands.

H-IIA fairings are designated by the diameter (4 or 5 m) and the number of payload compartments (S for single or D for dual). The upper and lower compartments of the 4-m-diam dual payload fairing are each available in long or short sections. For example, the 4/4D-SL fairing designation refers to a fairing with two 4-m-diam payload compartments, with a short upper compartment and long lower compartment. Clamshell fairings are jettisoned using separation springs and swing hinges. The single-piece lower fairing of the dual payload fairings is jettisoned forward using springs. A clamshell lower structure is also available in the Model 4/4D-LC fairing. Access doors, radio-transparent windows, and acoustic blankets are standard features.