The Ariane 4 was developed specifically to carry commercial payloads to GTO, and can be configured with different combinations of strap-on boosters to tailor the performance to mission requirements. Performance to GTO was improved in the decade following the first Ariane 4 launch, thanks primarily to improvements in the upper stage. Because Ariane frequently carries two payloads, it can still be an appropriate choice for satellites that are much lighter than the total launch vehicle capacity. GTO payloads are typically delivered to an inclination of 7 deg rather than 5.2 deg because Ariane must fly slightly north before turning east. Spacecraft carrying large amounts of propellant pose a larger public risk, requiring Ariane to fly slightly farther north before turning to the desired flight azimuth to avoid range safety concerns around the city Kourou. Performance values shown here are for spacecraft with no more than 450 kg (990 lbm) of hydrazine or 600 kg (1320 lbm) of oxidizer in any single tank. As with many other launch systems, Arianespace has begun offering higher performance by reducing the flight performance reserve propellants retained on the third stage. This results in increased performance, at the risk of somewhat larger variations in the orbit apogee altitude achieved. The option is therefore suitable for spacecraft with liquid propulsion systems that can adjust their final orbit accordingly. Rather than performing a Minimum Residual Shutdown (MRS) in which the propellants are burned to depletion, Arianespace simply reduces the amount of propellant margin, typically to provide a 50% probability of guidance command shutdown rather than the full 99%. Further performance tailoring can be performed by raising or lowering the orbital perigee between 185 and 250 km (100 and 135 nmi), or by reducing the orbital inclination. For example, the maximum payload carried to GTO by an Ariane 4 is 4947 kg (10,906 lbm) on flight V113, 177 kg (390 lbm) higher than the standard capability.

Ariane 5 is primarily used to carry multiple spacecraft to GTO or other high-energy orbits. The core EPC stage burns out in a near-orbital trajectory with an apogee of several hundred kilometers, and the upper stage then fires to place the spacecraft into GTO. As a result, the standard GTO for Ariane 5G and 5ES has a perigee around 560 km (303 nmi), though this can be varied to tailor the trajectory. Like Ariane 4, Ariane 5 performance can be increased with reduced performance reserves and variations in the orbital targets.

Because injection into GTO must be done near the equator, most other launch vehicles in Ariane’s class have upper stages with restartable engines, which can inject into a parking orbit, coast to the equator, and ignite again for injection into GTO. Ariane has never needed this capability, since its near-equatorial launch site allows the upper stage to reach a low orbit and continue thrusting directly into GTO without stopping. As a result, no previous Ariane configuration has had a restartable upper stage. However, future missions, such as launching satellites directly into GEO, deploying the Galileo constellation in MEO, or delivering the ATV to the International Space Station, will require a more flexible mission profile. The “Versatile” version of the EPS stage, and the ESC-B stage, will both have a multiple restart capability in order to perform these missions.

Performance capabilities shown below include the mass of the spacecraft, a dual launch structure (if needed), and payload adapter(s). Adapters typically have a mass of 75–100 kg (165–220 lbm) for Ariane 5. The masses of standard dual-payload structure are provided in the Payload Fairing section. The upper stage flight performance reserve provides a 99% probability of injection into the target orbit, unless otherwise noted. Available inclinations range from 5.2 deg to 100.5 deg. 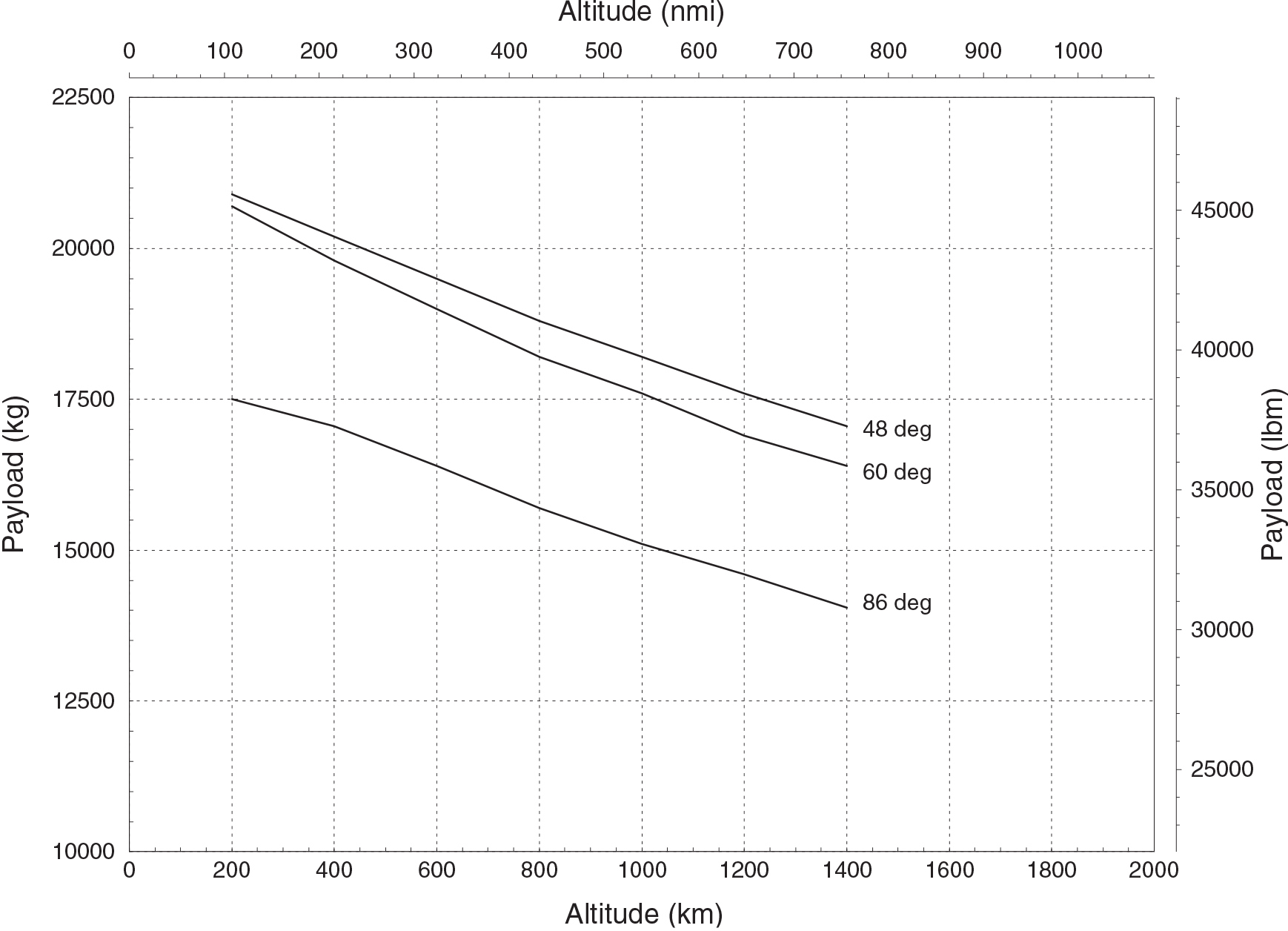 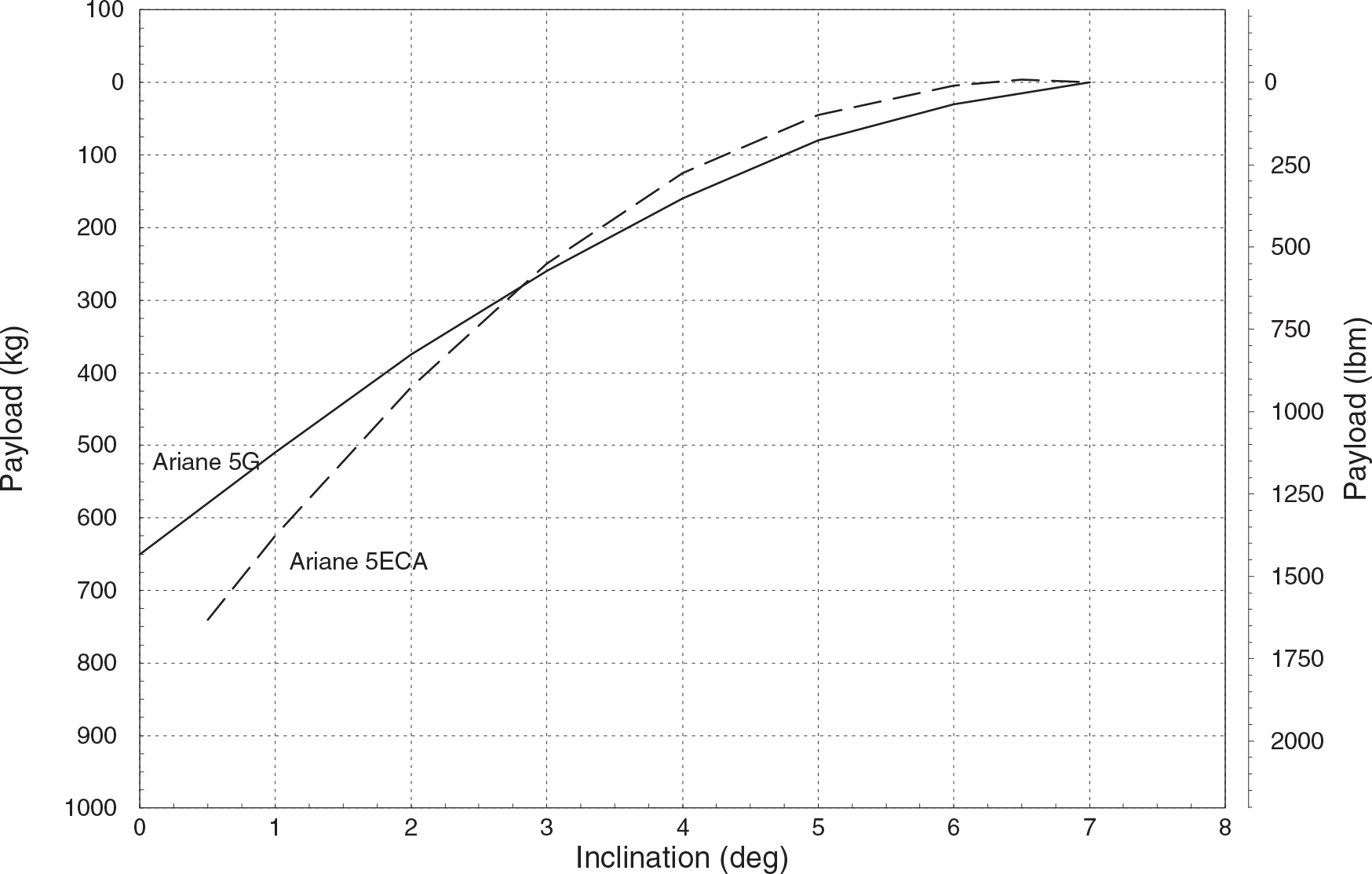