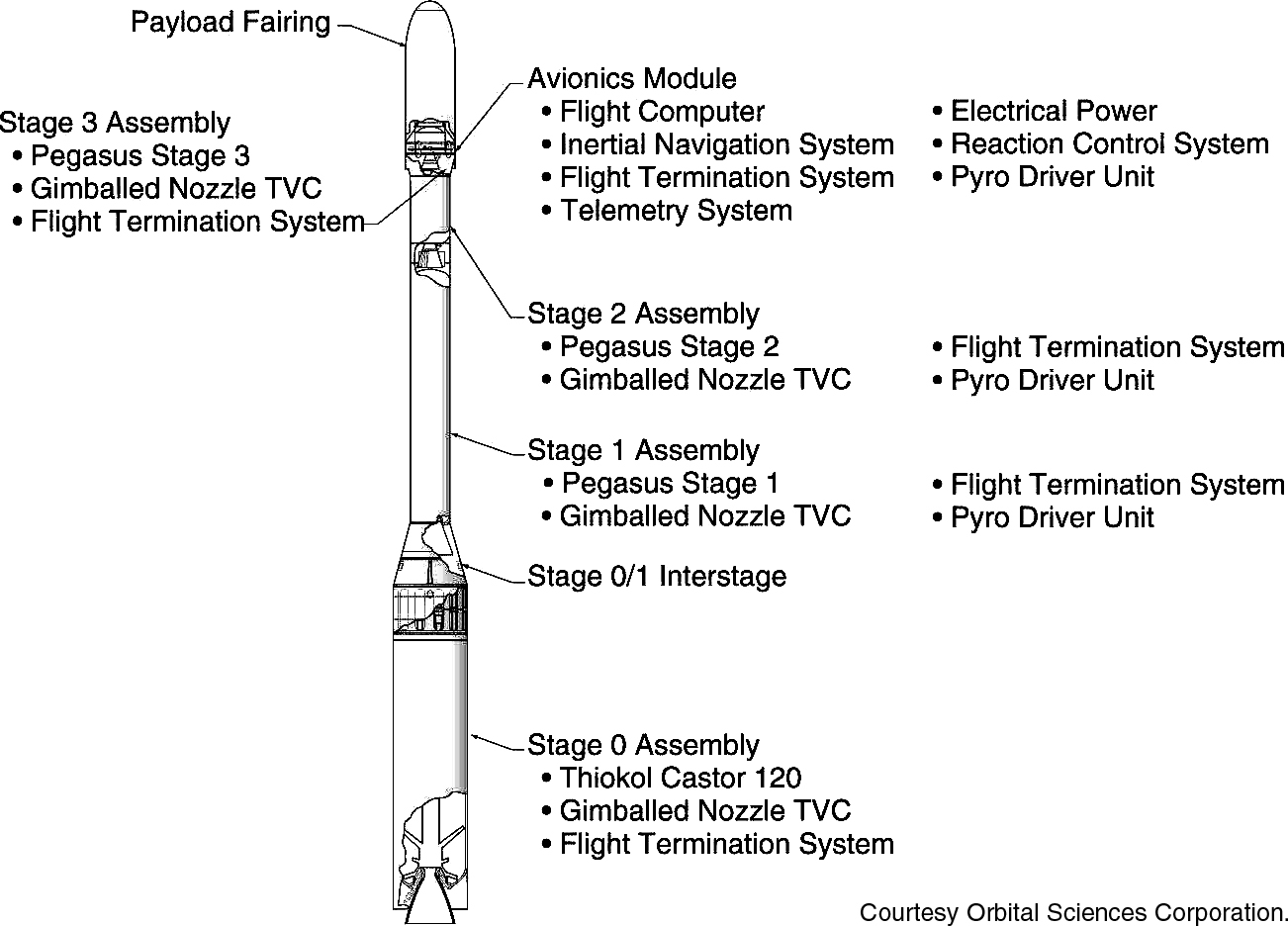 The Taurus first stage is called Stage 0 so that upper stages retain the same numbers as on Pegasus. The SSLV configuration uses a government-furnished Peacekeeper ICBM first-stage motor. Because it is used in an actively deployed missile, data on this motor are not available. The commercial Taurus uses the ATK Thiokol Castor 120 SRM for its first stage. The Castor 120 is a derivative of the Peacekeeper ICBM first-stage motor, designed for space launch applications. It has the same diameter as the Peacekeeper, but is about 0.5 m (1.7 ft) longer to include more propellant. A slight change to the propellant formulation results in a longer burn time that is more suitable for space launch vehicles. The casing is filament-wound graphite–epoxy composite, and TVC is provided by a new blowdown hydraulic nozzle gimbal system similar to those developed for the Castor IVB and SSLV Taurus first stage.

The Taurus upper stages (known as Stages 1, 2, and 3) are the ATK Thiokol Orion 50SG, 50, and 38 SRMs, respectively. These motors were originally developed for Orbital’s Pegasus launch vehicle and are fully flight qualified. They have been adapted for use on the both the SSLV and Commercial Taurus configurations, which use the same first, second, and third stages. Common design features, materials, and production techniques are applied to all three motors to maximize reliability and production efficiency. The first stage has an added nozzle gimbal system for thrust vector control. The nozzle of the equivalent Pegasus stage was fixed because attitude control is provided aerodynamically.

In the Taurus XL configuration, the Stage 1 and Stage 2 (that is, the second and third stage) motors are replaced by the extended length Orion 50S-XL and Orion 50-XL. These motors have 24% and 30% more propellant, respectively, than the original motors.

An ATK Thiokol Star 37FM kick motor can be used in place of, or in addition to, the standard Orion 38 as an optional for high energy missions, such as GTO or Earth escape trajectories. The Star 37FM is a spin-stabilized motor with about 1 t of propellant.

The following data describe the standard Commercial Taurus configuration. For details on the XL motors used on Stages 1 and 2 of the Taurus XL, see Pegasus chapter. Note that masses shown are for the motors only. Orbital has not provided data on the full-stage gross masses.

Gimbaled nozzles on all four motors provide pitch and yaw control during powered flight. The actuation system varies—Stage 0 uses a blowdown hydraulic system while Stages 1, 2, and 3 use electromechanical actuators. Three-axis control during coast periods, as well as roll control during Stage 1, 2, and 3 burn, are provided by a regulated cold-gas attitude control system located on the Taurus avionics shelf.

The Taurus avionics system is an all-digital distributed-processor design. Mission reliability is achieved by the use of simple designs, high-reliability components, high design margins and extensive testing at the subsystem and system level. The heart of the avionics system is a multiprocessor, 32-bit flight computer that communicates with all vehicle subsystems and the launch support equipment using standard RS-422 digital serial links. All avionics on the vehicle feature integral microprocessors to perform local processing and to handle communications with the flight computer.

Orbital offers two flight-proven payload fairings to encapsulate the payload and provide protection and contamination control during ground handling, integration operations, and flight. Both fairings are bisector shells constructed of graphite–epoxy facesheets with an aluminum honeycomb core. Two payload accommodation structures are available for comanifesting or secondary payloads. Both are mounted directly to the upper stage, enclosing the lower payload, and can be tailored in height to provide the appropriate volume. The Aft Payload Capsule (APC) is 1270 mm (50 in.) in diameter, and up to 1824 mm (71.8 in.) in length. The Dual Payload Attach Fitting (DPAF) has a diameter of 1600 mm (63 in.), and can be up to 2285 mm (90 in.) long. 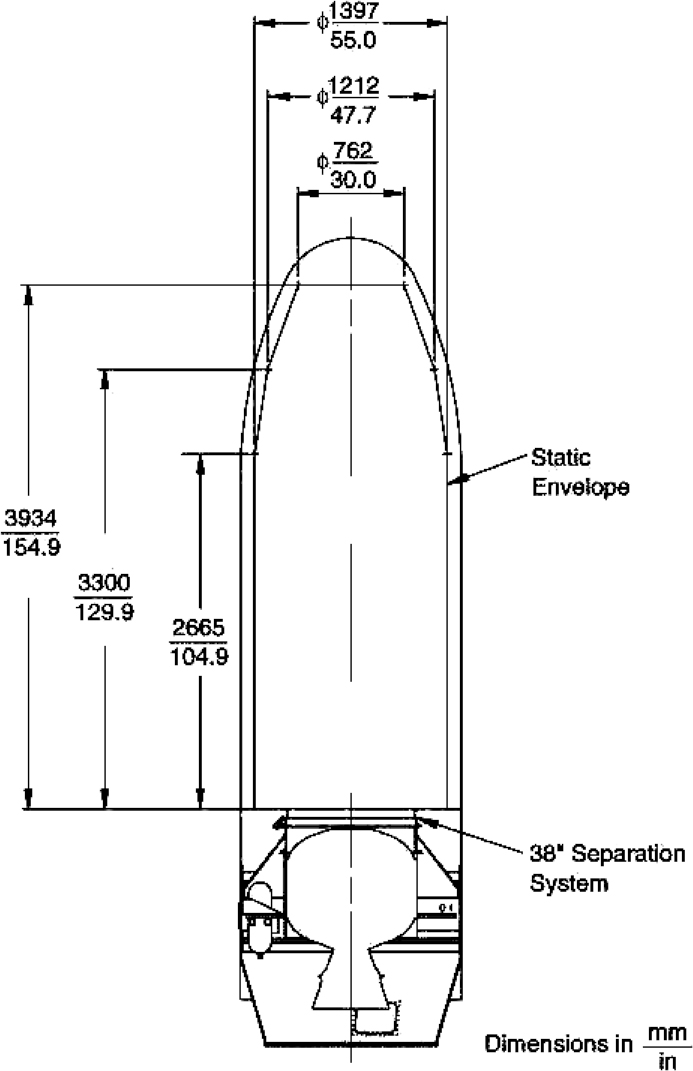 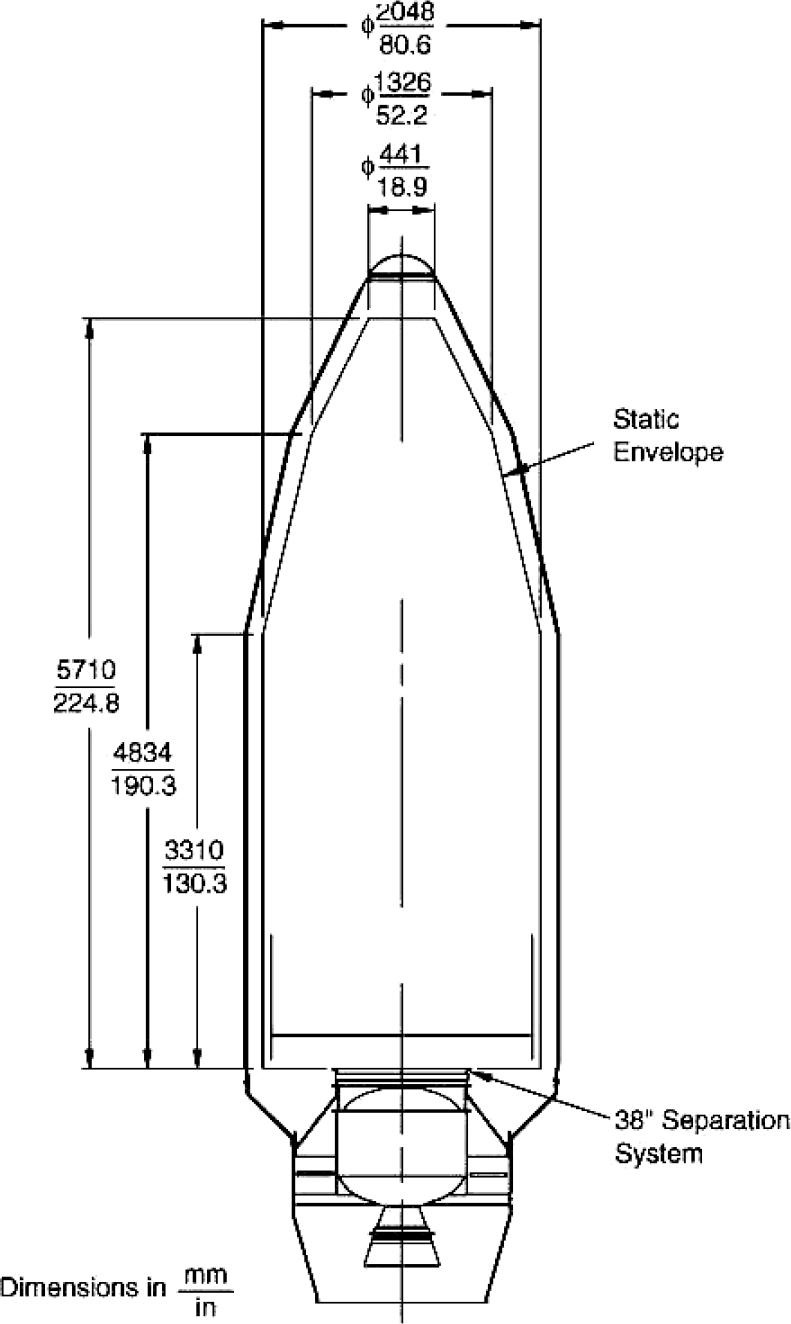