Falcon 9 and Falcon Heavy can provide payload pointing and roll control during long-duration coast phases for sun avoidance and thermal control. If requested, the Falcon second stage will point the X-axis of the launch vehicle to a customer-specified attitude and perform a passive thermal control roll of up to ±1.5 deg/sec around the launch vehicle X-axis, held to a local vertical/local horizontal (LVLH) roll attitude accuracy of ±5 deg.

Falcon 9 and Falcon Heavy can launch multiple satellites on a single mission, with the customer responsible for the integration of the multiple payloads. As a liquid-propellant launch vehicle with restart capability, Falcon launch vehicles also provide the flexibility to deploy each satellite into a different orbit, performance allowing.

Falcon launch vehicles can accommodate a broad range of dispenser systems including multi-payload systems, dual-payload attach fittings and mission-unique adapters. SpaceX can develop and provide such adapters and dispensers if desired, as a nonstandard service, or can integrate third-party systems. Contact SpaceX with your mission-unique requirements.

Falcon 9 and Falcon Heavy have been designed to provide as benign a payload environment as possible, via the use of all-liquid propulsion, a single staging event, deeply throttleable engines and pneumatic separation systems. The environments presented below reflect typical mission levels for Falcon 9 and Falcon Heavy; mission-specific analyses will be performed and documented in an interface control document for each contracted mission

Conditioned air will be disconnected for a short duration during rollout to the pad. Spacecraft environmental temperatures will be maintained above the dew point of the supply air at all times. A nitrogen purge is available as a nonstandard service. The payload attach fitting (PAF) and fairing surface are cleaned to Visibly Clean-Highly Sensitive, achieving a residue level between A/5 and A/2 and particulate between 300-500 micron, per IEST-STD-CC1246D.

4.3 FLIGHT ENVIRONMENTS
The maximum predicted environments the payload will experience from liftoff through separation are described in the sections below. Falcon vehicles may be able to accommodate payloads with characteristics outside the limitations indicated in these sections and may also be able to provide environments lower than those indicated in these sections. Please contact SpaceX with your mission-unique requirements.

For “standard” payloads with mass of more than 4,000 lb (1,810 kg), Falcon 9 and Falcon Heavy payload design load factors are shown using the envelope in Figure 4-1. For “light” payloads with mass of less than 4,000 lb (1,810 kg), Falcon 9 load factor is provided in Figure 4-2. For Falcon Heavy “light” payloads, please contact SpaceX for more details.

The load factors provided below are intended for a single payload mission; multi-payload missions should coordinate directly with SpaceX. A positive axial value indicates a compressive net-center-of-gravity acceleration, while a negative value indicates tension. Actual payload loads, accelerations and deflections are a function of both the launch vehicle and payload structural dynamic properties and can be accurately determined via a coupled loads analysis.

4.3.1.1 FALCON 9 AND FALCON HEAVY LOADS – STANDARD PAYLOAD MASS
The Falcon 9 and Falcon Heavy design load factors provided below are for typical spacecraft above 4,000 lb. Please consult with SpaceX for applicability based on spacecraft modal frequencies and CG height. 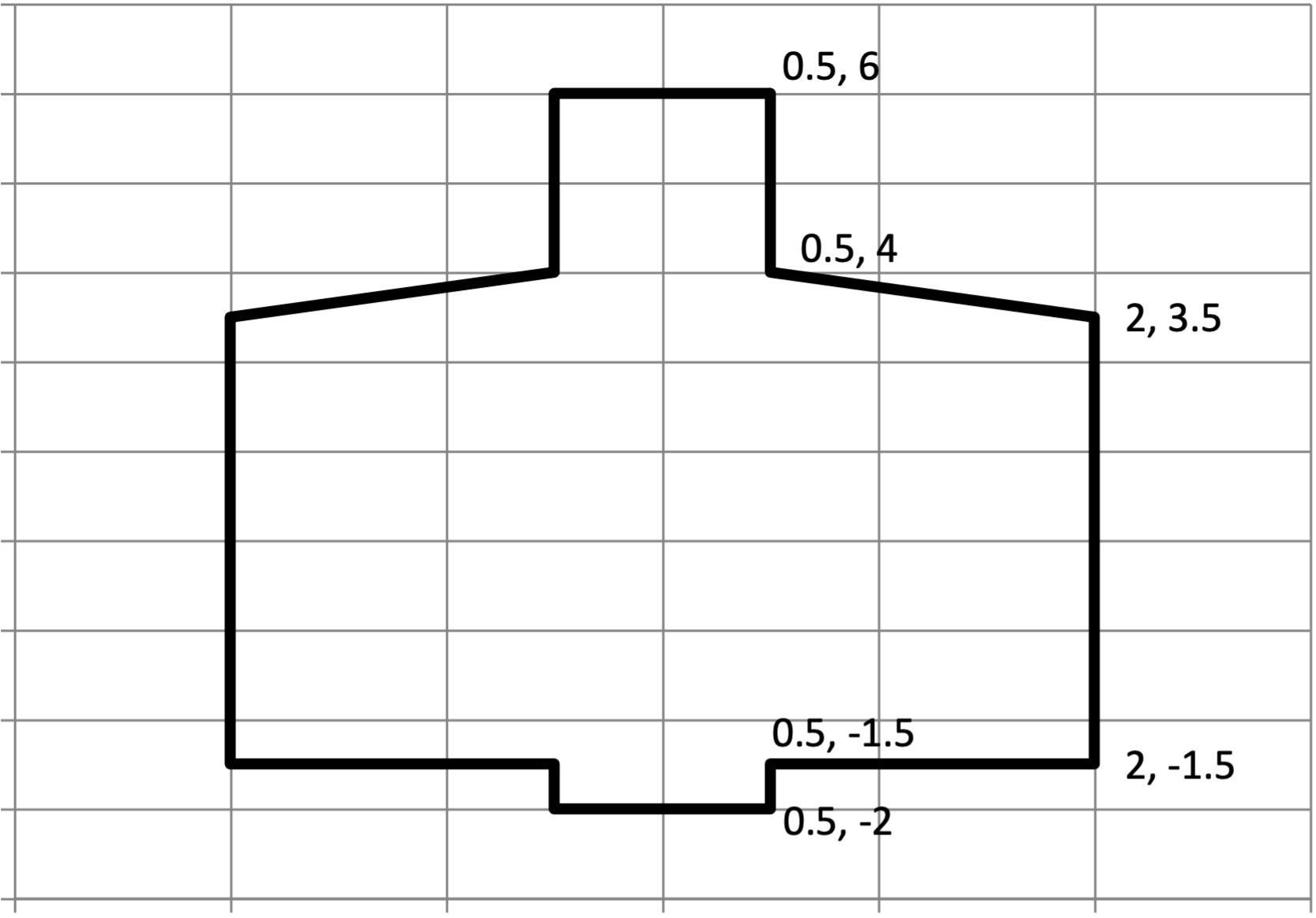 4.3.1.2 FALCON 9 LOADS – LIGHT PAYLOAD MASS
Figure 4-2 shows the Falcon 9 design load factors for lighter payloads (less than 4,000 lb). However, for ultra-light payloads (~2,000 lb or less), coordination with SpaceX mission management is required, since these load factors may not be adequate to design the payload. Actual spacecraft loads, accelerations and deflections are a function of both the launch vehicle and payload structural dynamic properties and can only be accurately determined via a coupled loads analysis. 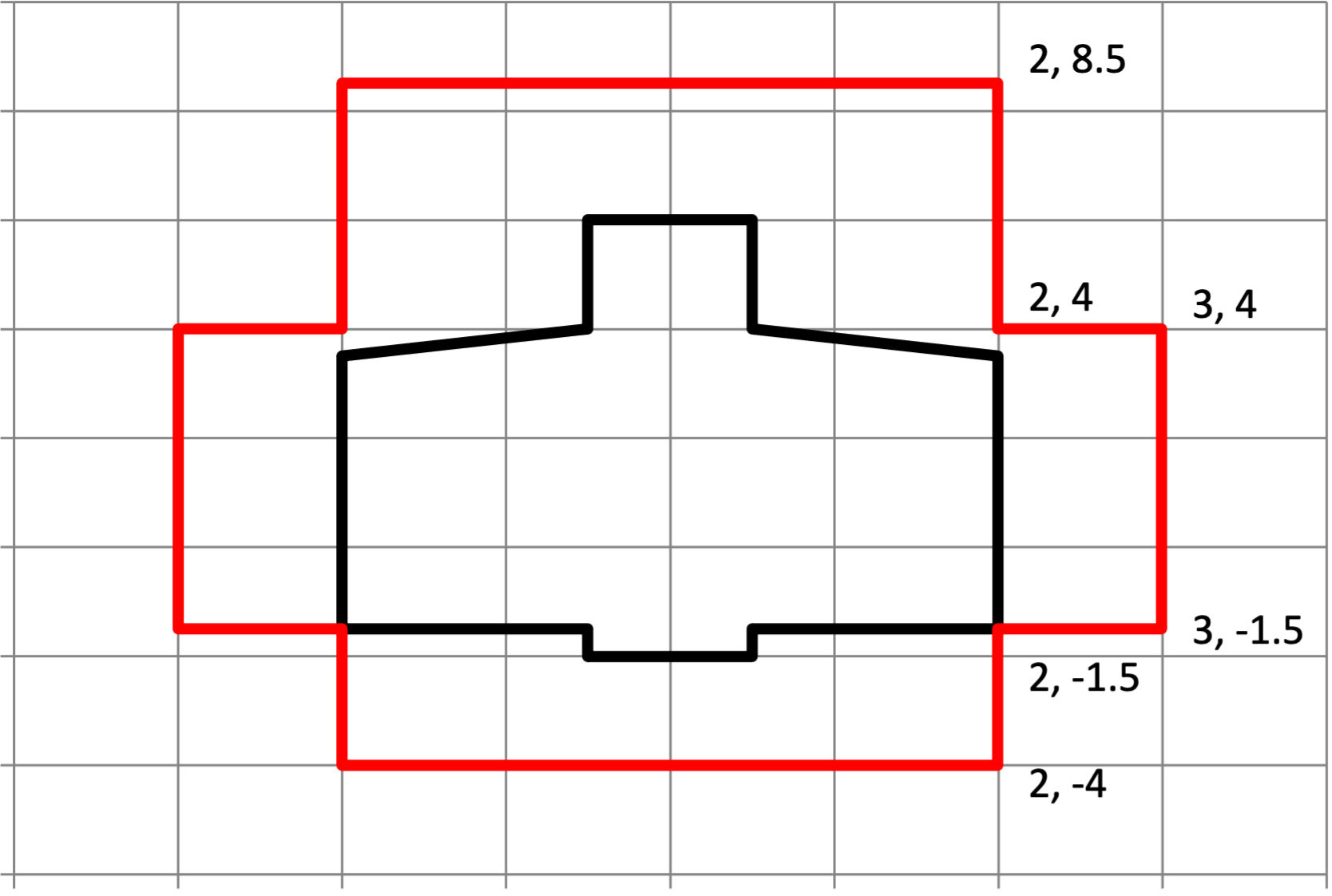 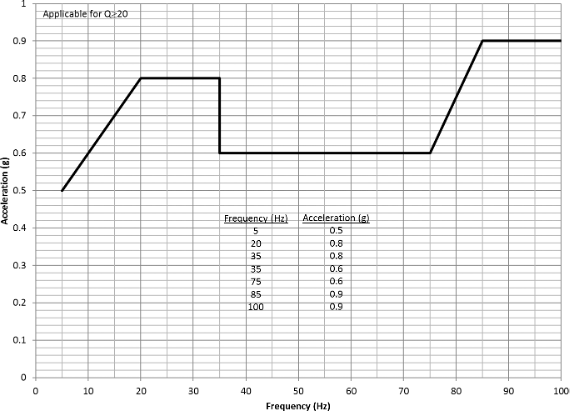 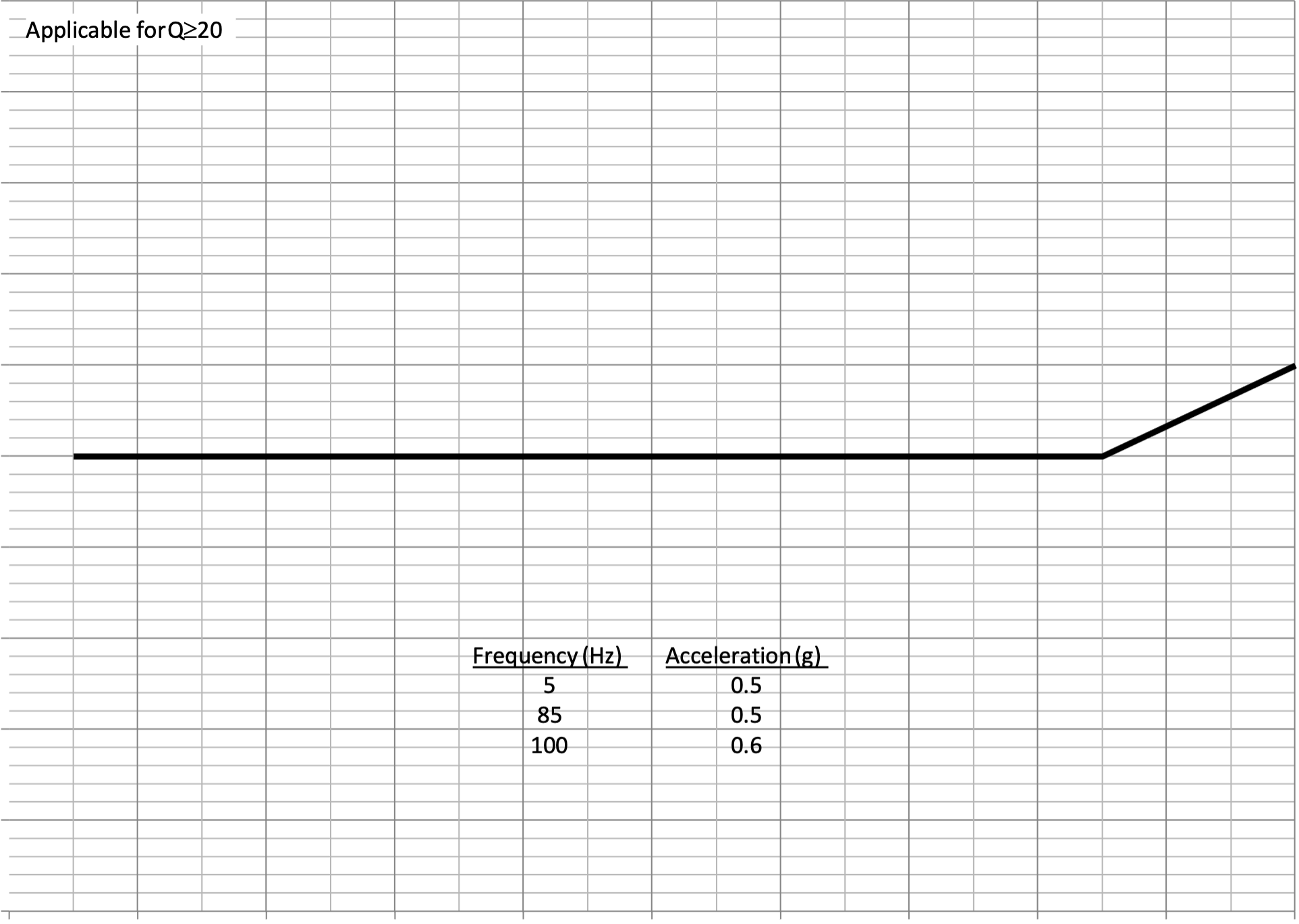 4.3.3 ACOUSTIC
During flight, the payload will be subjected to a varying acoustic environment. Levels are highest near liftoff and during transonic flight, due to aerodynamic excitation. The acoustic environment, defined as the spatial average and derived at a P95/50 level, is shown by both full and third-octave curves.

4.3.3.1 FALCON 9 ACOUSTICS
Figure 4-5 and Table 4-3 provide the Falcon 9 third-octave maximum predicted acoustic environment for typical payloads, while Figure 4-6 and Table 4-4 provide the full-octave maximum predicted acoustic environment. Levels are shown for both Cape Canaveral (SLC-40 and LC-39A) and Vandenberg (SLC-4E) launch sites respectively. Predicted acoustic levels for a specific mission will depend on the payload’s size and volume with smaller payloads generally having lower acoustic levels. Margin for qualification testing or for payloads larger than 60% volume fill is not included in the curves below. 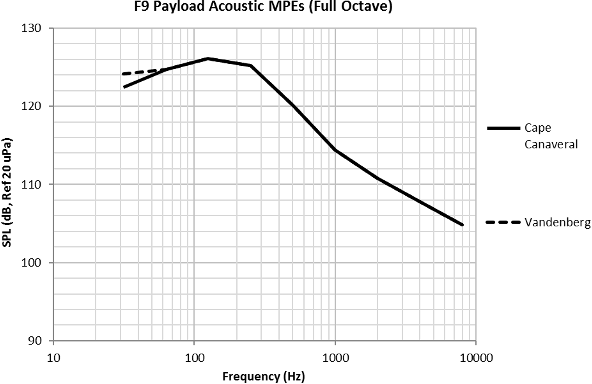 4.3.3.2 FALCON HEAVY ACOUSTICS
Figure 4-7 and Table 4-5 provide the Falcon Heavy third-octave maximum predicted acoustic environment for typical payloads, while Figure 4-8 and Table 4-6 provide the full-octave maximum predicted acoustic environment. These levels are applicable to future contracts from Cape Canaveral (LC-39A). Predicted acoustic levels for a specific mission will depend on the payload’s size and volume with smaller payloads generally having lower acoustic levels. Margin for qualification testing or for payloads larger than 60% volume fill is not included in the curves below. 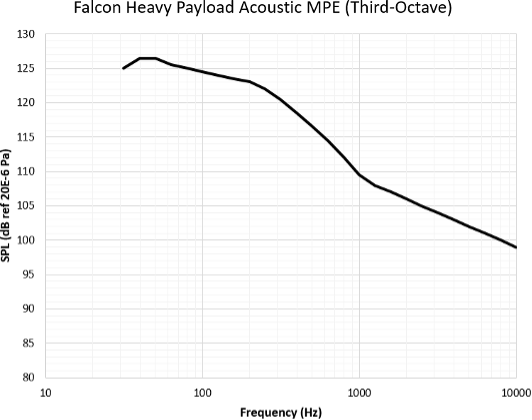 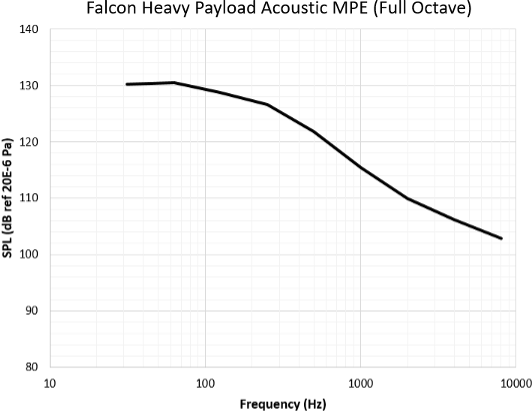 4.3.4 SHOCK
Five events during flight result in loads that are characterized as shock loads:

4.3.5 RANDOM VIBRATION
The maximum predicted random vibration environment at the top of the Payload Attach Fitting (PAF) can be seen in Figure 4-9 and Table 4-8. This environment is derived from flight data measured at the top of the PAF and does not account for any additional attenuation as the vibration traverses the mission specific payload adapter or spacecraft interface. The smoothline is an envelope of all flight events (liftoff, Stage 1 ascent, and S2 burns) and is derived at a P95/50 statistical level.

The random vibration environment is derived from the maximum response due to multiple forcing functions. These forcing functions can be broken into three frequency bins as shown in Figure 4-10 and listed below:

Low Frequency (0 - 100Hz)
a. Excitations driven by global vehicle motion and modes
b. CLA and sine vibration envelope this region

2. Mid Frequency (100Hz – 600Hz)
a. Excitation due to aeroacoustics
b. Acoustic excitation and aero buffet are primary drivers in this region

Spacecraft complying with standard component level qualification practices such as GEVs or SMC-S-016 are generally covered for this environment. Spacecraft with sensitive components that are not screened to vibration levels above the Falcon MPE can assess if acoustic testing envelopes the random vibration environment. One approach to determine this is to measure acceleration responses near components during acoustic testing. Components closer to the spacecraft separation plane are more likely to be driven by random vibration as opposed to acoustics than those further away. Spacecraft components with high surface area to mass ratios such as photovoltaic arrays generally see higher excitations from acoustic environments than from random vibration. However, these criteria are subjective and engineering best judgement should be used. 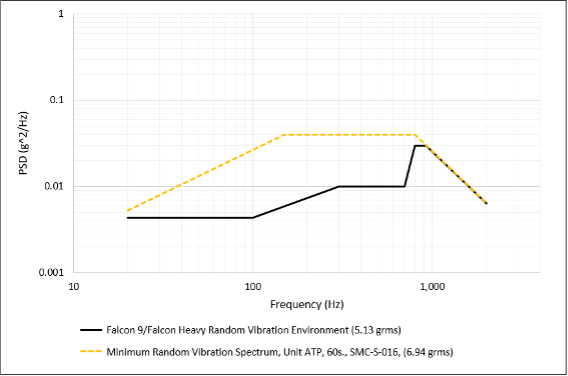 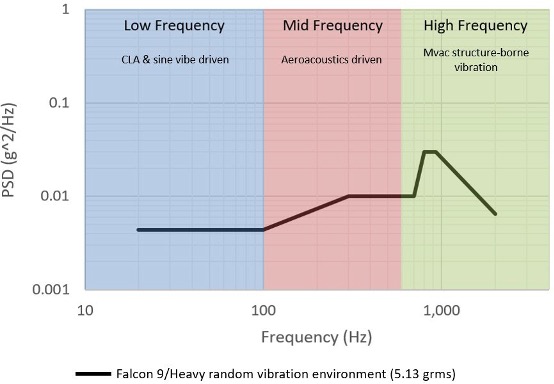 4.3.6.2 FALCON EMISSIONS
Payload customers must ensure that payload materials or components sensitive to RF environments are compatible with the worst-case Falcon 9 (Figure 4-11 and Table 4-11) and Falcon Heavy (Figure 4-12 and Table 4-12) launch vehicle radiated environment. These limits envelope expected emissions as calculated at the plane between the payload attach fitting (PAF) and mission specific payload adapter and do not include EMI safety margin or emissions from Avionics inside the fairing. Emissions from Avionics located inside the fairing volume are provided in Section 4.3.6.4. Notch requests will be assessed for compatibility on a mission-specific basis; notches for spacecraft receivers can typically be accommodated to the fairing avionics emissions envelope (48 dBuV/m) or lower depending on clearances to the payload dynamic envelope in Figure 5-1. 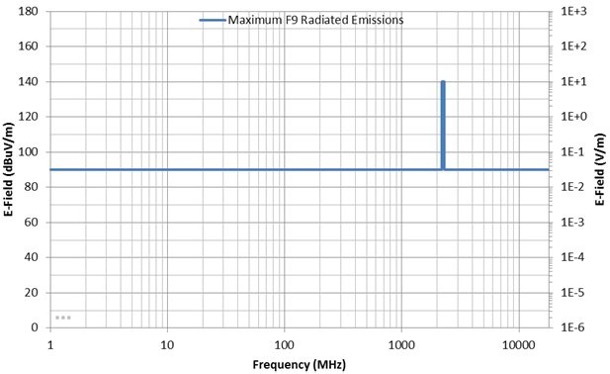 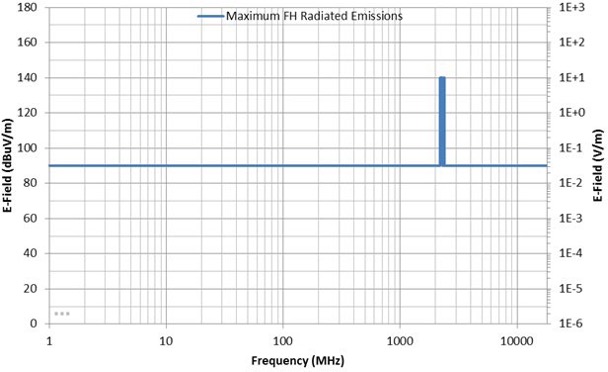 4.3.6.3 MAXIMUM SPACECRAFT EMISSIONS
Maximum spacecraft emissions for Falcon 9 and Falcon Heavy are shown in Figure 4-13 and Table 4-13. Payloads should not emit radiation in excess of the maximum allowable spacecraft emissions at any time during processing, integration or flight, as measured at the top of the payload attach fitting. Standard Falcon services do not permit active payload radiation during the countdown or flight prior to separation from the second stage. This limit envelopes expected emissions as calculated at the plane between the payload attach fitting (PAF) and mission-specific payload adapter and includes EMI safety margin. Notch requests will be assessed for compatibility on a mission-specific basis; notches for spacecraft transmitters can typically be accommodated to a level that is 6dB lower than SpaceX Avionics qualification limits. Please consult with SpaceX for your mission needs. 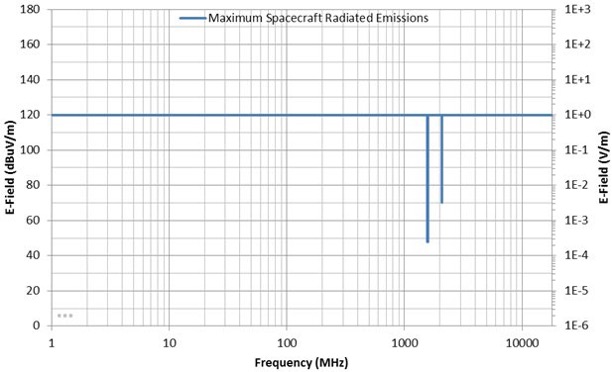 4.3.6.4 FAIRING EMISSIONS ENVELOPE
Falcon launch vehicles have avionics inside the fairing. The fairing emission level is shown in Figure 4-14 and Table 4-14. This limit envelopes the maximum expected combined emissions from these avionics, as calculated at the surface of the payload volume in Figure 5-1. EMI safety margin is not included. 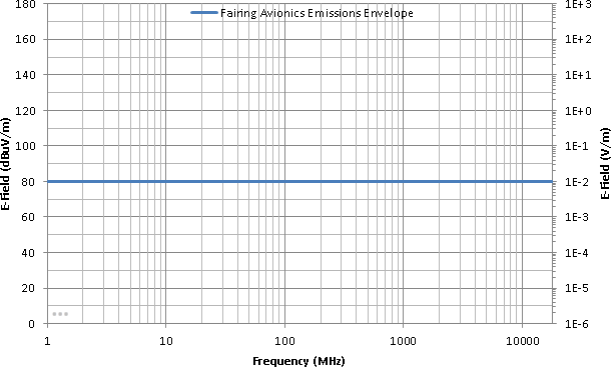 4.3.6.5 LAUNCH SITE EMISSIONS ENVELOPE
SpaceX has launch facilities on the East coast (SLC-40 and LC-39A) and on the West coast (SLC-4E). This limit envelopes the expected emissions at all SpaceX integration and launch facilities, including Range sources, local radar systems, and communications systems in use at SpaceX facilities (WiFi, mobile phones, two-way radios, etc). Spacecraft designed and tested to this limit (plus appropriate safety margin) can expect to be compatible with all known launch site emissions between spacecraft arrival and delivery to orbit. The envelope is calculated at the surface of the spacecraft and EMI safety margin is not included. Site-specific (not enveloped) analysis will be performed on a mission-specific basis as needed to meet customer requirements. Notches for spacecraft receivers typically do not overlap with launch site emissions frequencies and can typically be accommodated. 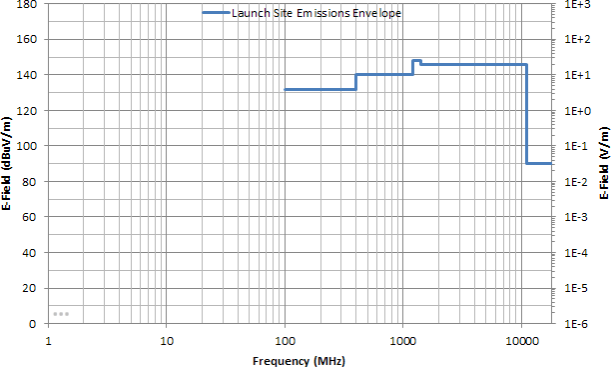 4.3.8 PAYLOAD TEMPERATURE EXPOSURE DURING FLIGHT
The SpaceX payload fairing is a composite structure consisting of a 2.5 cm (1 in.) thick aluminum honeycomb core surrounded by carbon fiber face sheet plies. The emissivity of the payload fairing is approximately 0.9. The fairing thermal insulation, which is attached to the outside of the fairing composite, is sized such that the composite never exceeds the ‘Bounding Fairing Composite Temperature’ profile shown in Figure 4-16. The curve is truncated at 240 seconds, although the approximate time of payload fairing jettison for a geosynchronous transfer orbit mission from Cape Canaveral is typically earlier, at around 210 seconds into flight. Payload fairing jettison timing is determined by customer requirements and physical limitations of the system.

4.3.9 FREE MOLECULAR HEATING
The payload fairing will nominally be deployed when free molecular aero-thermal heating is less than 1,135 W/m2. Other fairing deployment constraints can be accommodated as a standard service, although they may modestly reduce vehicle performance. Please contact SpaceX regarding mission-unique fairing deployment requirements.

4.4 ENVIRONMENTAL COMPATIBILITY VERIFICATION
Prior to launch, SpaceX requires that customers verify the compatibility of their systems with the Falcon vehicles’ maximum expected flight environments. SpaceX initiates this process by providing the applicable environments. The customer then summarizes its approach to environmental compatibility verification, and the process concludes with the customer providing test data to SpaceX, if necessary (Table 7-2).

Table 4-16 summarizes the typical verification activities performed by the customer and provides test levels based largely on Section 4.3 of this guide. Mission-unique limit levels and coupled loads analysis levels will be developed during the mission integration process and will serve as the basis for the verification activities. Alternate verification approaches may be acceptable, but coordination with SpaceX is required.