In the last 5-10 years, there has been an explosion in the technology of robotic aircraft. Researchers and pilots refer to them as Unmanned Aerial Vehicles (UAVs) but you have probably heard them called by a different name – drones! From delivering packages to surveying land and bringing medicine to isolated communities, commercial drones have the potential to revolutionize the world we live in. Drones are even poised to become a sporting phenomenon with the advent of drone racing. This promotional video produced by the Drone Racing League shows what an exciting, fast-paced sport drone racing can be. 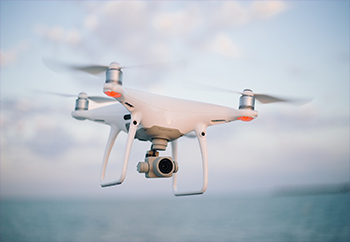 What is a drone? Drones are small aircraft which can fly around without any pilots inside of them. Drones come in all shapes and sizes. Some are small enough to fit in the palm of your hand, while others are big enough to carry people. Some of them are remote controlled, like a toy, while others are highly advanced robots that can move and make decisions without any controls.

Drones can be used for lots of different things because they can be fitted with cameras and other tools and because they are easier and cheaper to fly than a manned airplane. One use for drones is to deliver medicine to remote areas. Here are some photos of a drone in the U.S. being inspected and delivering medicine. Can you think of a good use for a drone? What about using drones for construction? Or fighting wild fires? Or inspecting dams or power lines? If you had your own drone, what would you do with it? 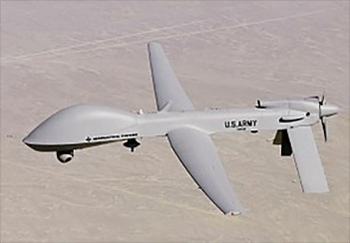 You have probably heard something or other about drones, but what exactly are they? A drone is a small unmanned aircraft. Drones can have wings like airplanes or rotors like helicopters and can be used for many different purposes. Scientists can use drones to observe wildlife, or natural phenomena in remote locations. Companies like Amazon are interested in delivering packages using drones. People also use drones to record footage for films and television shows. Many people fly drones simply because they like to.

Another cool use of drones is for racing – in the Drone Racing League, pilots race drones around an obstacle course. The pilots wear goggles connected to cameras on the drones so they can see where they are flying as if they are riding on the drone.

The Drone Racing League is one of the most exciting and high-profile uses for drones, but there are many more ways in which drones are becoming an increasingly large part of our lives. The term “drone” encompasses a very wide variety of vehicles, from large unmanned airplanes to tiny multi-rotor vehicles – the only requirement for a drone is that it is piloted remotely (by a pilot on the ground) or autonomously (by itself). Some drones look like airplanes or helicopters, but one of the most common types of drones is called a quadcopter. A quadcopter has four helicopter-type rotors (hence “quad” and “copter”) – these four rotors spin around, pushing air down and forcing the quadcopter upwards. By controlling the speed of each rotor, it is possible to precisely control the motion of the quadcopter to make it hover, slide in any direction, or climb and descend. This makes quadcopters very versatile – it is easy to maneuver them to fly in and out of tight spaces.

Quadcopters (and other drones) are useful because they are inexpensive, can be built for any size or mission, and can often reach areas which are otherwise inaccessible - you have probably heard about companies which want to deliver packages using drones; in addition, some non-profit organizations are using drones to deliver medicine to remote villages in far-flung corners of the world. Drones are also being used to inspect tall structures like cell phone towers, monitor wildlife, fight forest fires, and even take inventory in large warehouses. Some newer ideas include detecting and clearing land mines. 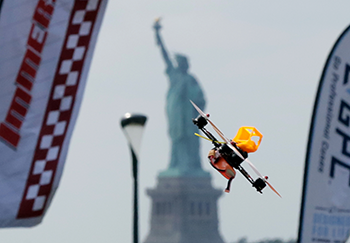 The drones in the drone racing league are a common kind of drone known as a quadcopter. A quadcopter has four helicopter-type rotors (hence “quad” and “copter”) which are spun by electric motors. While quadcopters might look strange compared to the helicopters and airplanes you might be more familiar with, they are ideal for many drone applications because they are versatile and easy to control and build. Why is this the case?

As mentioned above, a quadcopter has four propellers, or rotors. Normally, a rotating propeller causes an aircraft to twist slightly in the opposite direction (every action has an equal and opposite reaction) – this is why most helicopters have a tail rotor. Pilots and aircraft designers often have to deal with this effect, but a quadcopter specifically takes advantage of it. The rotors of a quadcopter are in two pairs. One pair rotates clockwise and one pair rotates counterclockwise; the torques of these two pairs cancel each other out. This lets a quadcopter stay straight and stable – it can hover and stay completely still.

If we speed up one of the clockwise rotors and slow down the other clockwise rotor, the net torque will remain unchanged but there will be more lift on one side of the drone than the other (one rotor is spinning more quickly). This will make the drone tilt as one side lifts up and the other falls down. Since the changes in the motors balance each other out, the quadcopter will not go up or down but will move in the direction it is tilted. 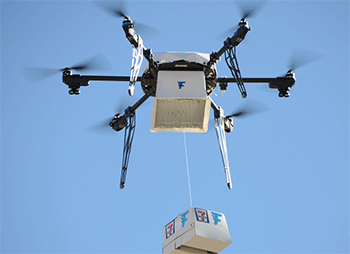 The article, “Top Ten Ways Drones Are Good for 2015,” lists several ideas for the use of drones. Can you see the advantages that drones would provide? What about the disadvantages? This article was originally published in July 2014. Have there been changes in the public perception of drones?

Any new technology can be used for ill effects as well as for good. Flying drones near an airport can interfere with airplanes taking off or landing; a drone that is sucked into a jet engine can destroy it. People wanting to “see the action” have flown drones near forest fires, getting in the way of the firefighters.  Drones make noise that is obnoxious in many settings; this is one reason the National Park Service has banned their use in National Parks. They can also be used to spy on people and to invade their privacy. You may want to have the class discuss the pros and cons, as well as physical and legal defenses against drones.

December 8, 1956: The American Vanguard TV-0 was successfully launched to an altitude of 126.5 miles and landed 97.6 miles downrange.