Crossing the Atlantic by Air 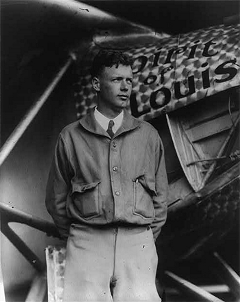 At 7:52 on the morning of May 20, 1927, a young man named Charles Lindbergh took off from Roosevelt Field on Long Island, near New York City.  Thirty-three and a half hours later, at 10:22 PM, he landed at Le Bourget Field just outside of Paris.  Eight years earlier, a New York hotel owner had offered a prize of $25,000 (equivalent to over $360,000 at today’s prices) to the first pilot to fly from New York to Paris.  Lindbergh’s success sparked great enthusiasm for aviation.

NGSS: Earth’s Systems: Develop a model to represent the shapes and kinds of land and bodies of water in an area.

Charles Lindbergh’s path took him from Long Island, New York to Paris, France.  You can point out his route and various waypoints on a world map or, if available, on more detailed local maps of North America and Europe.

Here is a list of places that are mentioned in a recounting of the flight:

If you look at all these places on a world map, you will see that Mr. Lindbergh’s route did not follow a straight line on the map.  Instead, Nova Scotia is a little north and Ireland is quite a bit north of a straight line connecting New York and Paris.  However, if you plot the places on a globe, you will see that a “straight line” (called a “great circle”) that you can make by stretching a string across the surface of the globe between New York and Paris runs farther north than the straight line on the map.  That said, Ireland is still a good bit north of even the great circle; Mr. Lindbergh’s navigation was slightly off the mark.

Suggested Activity:  Use a length of string or a measuring tape, a world map, and a globe to illustrate the difference between “straight lines” on a map and great circles on a globe.  North-south routes and routes that are near the equator are very similar on a map and a globe while east-west routes that are in the far north or the far south can be quite different.  As an extreme case, you can show the route between New York City and Moscow.

If you start at 7:52 AM and add 33½ hours, you will not get 10:22 PM.  This is because New York and Paris are in different time zones:  when it is 4:00 in New York it is 10:00 in Paris.  Time zones exist because the earth is round:  if the sun rises around 6:00 AM and sets around 6:00 PM, different places on the earth will see this happening at different times.  If you have a globe and a lamp, you can illustrate this.  While New York and Paris are six hours apart nowadays, in 1927 New York was one of the few places in the United States that observed Daylight Saving Time while France did not.  So when Charles Lindbergh made his historic flight, New York and Paris were five hours apart.

Lindbergh was born on February 4, 1902 in Detroit, Michigan.  He learned to fly in his early twenties, making his first solo flight (without an instructor on board) in 1923.  Four years later he made his famous flight across the Atlantic Ocean.

After the fame that his flight brought him, Lindbergh sought a quieter and more private life.  He and his wife moved first to New Jersey and then to Europe, living in England and France.  When the Second World War broke out, they moved back to the United States.  Lindbergh initially thought that the United States should not intervene in the war, but when the Japanese attacked the United States Lindbergh worked as an advisor and a test pilot.

After the war, Lindbergh and his wife moved to Maui in the Hawaiian Islands.  He died there in 1974.

For his solo trans-Atlantic flight, Lindbergh received the Distinguished Flying Cross, the first ever awarded.  Here is the text of President Coolidge’s speech on the occasion.  Details of the award and Lindbergh’s tour of the states promoting aviation are available on CharlesLindbergh.com.  (The site also has biographical facts, a timeline, and other information.)

Lindbergh also received the Hubbard Medal from the National Geographic Society.  President Coolidge also gave a speech on that occasion.  And here is a list of the Hubbard Medal recipients, which include many aviators and astronauts.

Suggested Activity:  Compare President Coolidge’s speeches at the awarding of the Distinguished Flying Cross and of the Hubbard Medal.  What is the focus of each speech?  What of Lindbergh’s activities and characteristics does President Coolidge emphasize in the two speeches?

NGSS: Earth and Human Activity: Analyze and interpret data on natural hazards to forecast future catastrophic events and inform the development of technologies to mitigate their effects.

Note the motivations for each flight.  Some pilots were competing for prizes; some were competing for national glory.  These two things motivate many pioneers, both in aviation and in other fields.  Can you think of any other examples?

NGSS: Earth’s Systems: and its effects on Earth materials and surface processes.

Charles Lindbergh faced many dangers in his solo flight across the Atlantic Ocean.  First among these was the possibility that his engine would stop working.  With no place to land, he and his airplane would have been lost at sea—vanished off the face of the earth.  Most other pilots who tried to fly across the Atlantic used multiple-engine airplanes so that if one engine stopped working they could limp along with the other.  Most other pilots also flew over the “sea lanes,” which are parts of the ocean where ships usually sailed, so that if they had to make a forced landing in the ocean there was a chance that a nearby ship would rescue them.  (This happened more than once.)  Lindbergh, in contrast, flew a “great circle” route north of the sea lanes.  Had he been forced to ditch in the ocean, there would have been no ships nearby to pick him up.  He also chose not to carry a radio (allowing him to carry the radio’s considerable weight in extra fuel) so he could not call for help.

Another danger that Lindbergh faced was the weather.  Weather forecasts were much less reliable in 1927; forecasters relied on ground stations for weather reports over land and on ships for weather reports at sea.  The latter were quite few and far between.  And the weather was quite a problem; two pilots who had tried to fly across the Atlantic three weeks before Lindbergh’s flight apparently crashed in fog, unable to see the ground or the sea.  Lindbergh himself found ice collecting on his wings as he flew through a cloud, forcing him to turn around and then fly around the cloud.  (Ice on wings, apart from adding its weight to the total weight of the airplane, changes the shape of the wings and can destroy their ability to create lift.)  In his efforts to avoid flying through clouds, Lindbergh occasionally flew as low as ten feet above the ocean.

In addition to the external dangers that Lindbergh faced, there were the physical limitations that the human body presents.  His flight took 33½ hours; not having a co-pilot, he needed to stay awake the entire time—almost a day and a half, in addition to the time spent preparing the airplane for the flight.  In all, Lindbergh stayed awake for 55 consecutive hours.  During this time he had hallucinations and saw mirages in the clouds.  Another reason he flew so low over the ocean at times was so that the cold salt spray from the ocean would blow on his face and keep him awake.

May 16, 1957: A Soviet R-2A rocket equipped with a camera produced the Soviet Union's first photographs of the Earth from a high-altitude rocket.