Much of mechanical engineering is based on the six simple machines: the lever, the inclined plane, the pulley, the wedge, the wheel and axle, and the screw. By redirecting or amplifying forces, they allow people to do things that would otherwise be too difficult.  This lesson explores the simple machines and how they are used in aerospace engineering.

NGSS: Engineering Design: The shape and stability of structures of natural and designed objects are related to their function(s).

Have you ever used a lever? If you have played on a seesaw, you have. How about an inclined plane? Any time you walk up or down the handicapped ramp at a building entrance you do that.

The lever and the inclined plane are two examples of what we call “simple machines.”  They are machines because they help us do things by applying more force or less force than we can directly—by letting us push harder or more gently than we can by hand.  We use them so often we usually don’t even notice them. Here are the six simple machines: 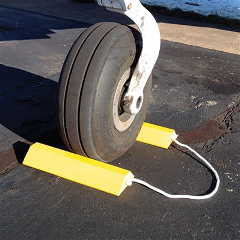 These simple machines are all around us.  Can you think of any examples? Engineers use a lot of simple machines when they design things like aircraft and spacecraft, but simple machines can be used day-to-day as well. For example, look at this picture of an aircraft’s wheel as it sits at an airport. How many simple machines do you see?

The most obvious one is the wheel and axle, but the yellow blocks (chocks) are simple machines as well; they are wedges. They keep the plane in place on the ground. How? Well, if the plane tries to roll, it presses on the chocks, which press on the ground so that they can’t move. Unless the wheel rolls over the chocks, it can’t move either. The hinge at the very top of the picture is another wheel and axle. 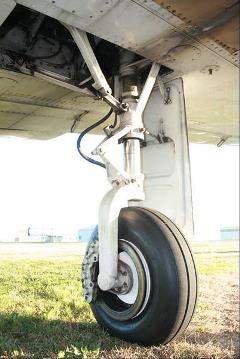 NGSS: Influence of Science, Engineering, and Technology on Society and the Natural World: People’s needs and wants change over time, as do their demands for new and improved technologies.

Not surprisingly, aerospace engineers also use simple machines when building and using airplanes and spacecraft. Let’s look at some airplanes and find a few simple machines. A good place to start is with an airplane’s undercarriage. The wheel and axle together make a simple machine; an airplane’s wheels are examples of this.  Less obviously, the diagonal struts that push the wheels down and lift them up form a third-class lever. (The diagonal strut in the picture that is the lever is the one that pulls the wheel sideways into the opening in the wing; the forward diagonal strut is bracing to make the assembly stronger and, because it does not move, is not really a lever.)

What we call “simple machines” are machines because they help us do things by applying more force or less force than we can directly—by letting us push harder or more gently than we can by hand. We use them so often we usually don’t even notice them. 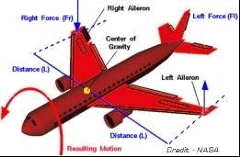 An airplane’s control surfaces—the elevators, rudder, and ailerons—are examples of another lever.  When the pilot wants the airplane to climb, for example, he makes the elevators deflect upward. The air pushing on the top surfaces of the elevators pushes them down, which causes them to act like a lever and turn the airplane so that its nose is facing upward slightly. Indeed, the reason that elevators and rudders are in the far back of the airplane and not towards the middle is so that they have as much of a lever arm as possible to give them as much mechanical advantage as they can get. In the same way, ailerons are usually placed on the outer parts of the wings away from the fuselage. 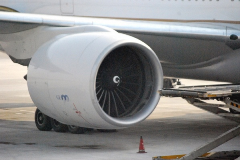 Jet engines have several spinning parts including a fan, a compressor, and a turbine.  Each of these is a wheel and axle assembly, but in place of a typical wheel they have fan blades around a central point. (You can check this NASA article on how jet engines work; it includes a diagram of the engine’s parts and an explanation of how they work to power the aircraft.)

Another item used in operating airliners is the conveyer belt that the baggage handlers use to load and unload people’s luggage from the cargo hold. The conveyor belt itself is not a simple machine, but it implements two different simple machines. One is the inclined plane, which pulls the luggage up the gentle slope rather than having to lift it directly upwards. The other is the wheel and axle, which you find at the two ends of the conveyor belt.

NGSS: Influence of Science, Engineering, and Technology on Society and the Natural World: Evaluate competing design solutions based on jointly developed and agreed-upon design criteria using a systematic process to determine how well they meet the criteria and constraints of the problem. 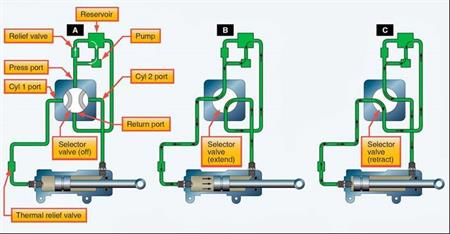 While it is tempting to try to reduce everything to simple machines, there are other basic principles in play as well. For example, in large modern airplanes the control surfaces are powered by a hydraulic system. Early airplanes used cables with pulleys and levers to connect the pilot’s stick to the elevators and ailerons and the pedals to the rudder, meaning that the pilot had to use his physical strength to make the control surface turn. If the airplane is too large, though, the pilot is not strong enough to deflect the control surface directly and needs help. The hydraulic system provides this help.

The idea behind a hydraulic system is that (except for buoyancy effects) the pressure on the surface of a fluid is the same everywhere. Couple this with the fact that the force exerted by a fluid on a surface is the pressure multiplied by the surface area and you have the hydraulic principle. On one end you have a small piston that you can move a long distance or a small pump that you can use to increase the pressure of the fluid. On the other end you have a large piston that you can use to exert a large force. You use the pump or the small piston to increase the pressure in the fluid without exerting much force and as a result you get a large force from the large piston.

In a modern airliner, when the pilot wants to turn the airplane he (or she) moves the controls. The controls send an electrical signal to a hydraulic motor, which turns on. The hydraulic fluid that the motor pumps then pushes against the control surface, causing it to deflect.

NGSS: Developing Possible Solutions: When evaluating solutions, it is important to take into account a range of constraints, including cost, safety, reliability, and aesthetics, and to consider social, cultural, and environmental impacts.

Although there are clear examples of simple machines throughout the world of engineering, most simple machines are less obvious because they exist at such a low level in an object’s design. Screws that hold assemblies together, pulleys that transmit power to fans and other devices, levers that actuate different assemblies and components – these are all simple machines which can be found in great quantities in just about any engineered device or system, in aerospace and beyond.

The six simple machines were originally identified by Renaissance scientists such as Stevin, Galileo, and Da Vinci. They and their contemporaries realized that the simple machines make it possible for a person to apply more force and do more things than he would be able to if he were acting alone (i.e. without the machine). Essentially, a simple machine makes it possible for a small force to accomplish a task which would ordinarily require significantly more force. For example, consider lifting a heavy weight. Chances are, you probably can’t lift a car up by any significant distance (say, 10 centimeters).  However, if you pushed the car up a ramp, it would be relatively easy for you to “lift” the car to the same height. In this way, the simple machine (the ramp, in this case) acts as a sort of “force amplifier” which increases your ability to do work with a given force.

Another example is the lever.  Imagine tightening a bolt:  you wouldn’t be able to tighten it very much using just your fingers, but with a wrench or a spanner, you can get it much tighter. Why? Because the tool acts as a lever—it amplifies your input force (you pushing on the handle) to create a much higher output force (the teeth of the wrench/spanner pushing on the bolt head). The term for this phenomenon is mechanical advantage.

Of course, there’s no such thing as a free lunch, so the mechanical advantage we get from a simple machine comes with a cost. The cost we pay is usually the distance that we have to apply the force over. It’s easier to push a car up a ramp than to lift it vertically, but the car will need to travel much farther up a ramp than it would if we were to lift it vertically. Similarly, we have to move the handle of the spanner/wrench much farther than the head of the bolt in order to get any mechanical advantage.

The concepts involved in the use of simple machines are more general than the machines themselves. For example, when an airplane climbs slowly after take-off or descends slowly toward its landing, it is using the idea of an inclined plane even though there is no physical object in the sky that it is moving along. Less intuitively, the dynamics of a spacecraft’s gravity assist maneuver can be thought of as being like the work of a pulley, with the planet changing the direction of the spacecraft’s motion while increasing (or decreasing) its speed relative to the Sun.

Simple machines are prevalent in just about everything that makes our modern lives convenient, but they are no longer thought of as a comprehensive foundation for mechanics like they were in the Renaissance. During the Industrial Revolution, the increasing complexity of machines gave rise to new methods of analysis and new machine theories. Most modern engineers think not in terms of simple machines, but the kinematics of multi-element systems. Whereas simple machines link single forces to single outputs, the complexities of modern machines—even the “simple” ones—often result in (or require) close coupling between many different forces and outputs at once.

November 8: The American Pioneer 2 was launched toward the Moon but a premature shutdown of the second stage and a broken wire in the third stage caused the spacecraft to re-enter 45 minutes after launch.