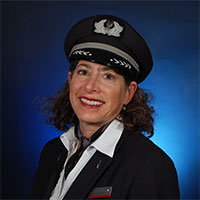 Captain Deborah Hecker currently serves as SR. MGR Flight Operations – Policy & Procedures for American Airlines. A graduate of Michigan State University with a degree in International Relations, she began her aviation career in 1994 flying freight out of a small Michigan airport. She then flew for Piedmont Airlines, before being hired by American Airlines in 1999. Deborah has flown the B737/757/767/777/A319/320/321 and as flight engineer on the B727 for American Airlines. She also completed training to become a certified American Airlines flight attendant on the B777-200, B757/767, B737, and MD80, becoming the first person in the history of American Airlines to be dual qualified as a pilot and flight attendant. In addition to pilot duties at American, she has been involved with numerous other assignments, including four years as Chief Pilot in PHL & DFW, manager in the Customer Experience department, project manager with the Flight team for the LUS/American merger, pilot recruitment, diversity & leadership strategies, and numerous military veteran events.

Deborah resides in Murphy, Texas with her three sons.