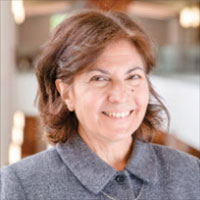 Janis Terpenny is the Dean and Wayne T. Davis Dean’s Chair for the Tickle College of Engineering at the University of Tennessee, Knoxville. Her research focus is centered on engineering design process and decision making, smart  and integrated manufacturing systems, and engineering education. Collaborations across disciplines and with industry and community partners have been integral to her work.

Terpenny co-founded the Center for e-Design in 2003. During her 10+ years as its director, this National Science Foundation Industry University Cooperative Research Center grew to include 7 universities and 30+ members. Terpenny also served as technical lead of the Advanced Manufacturing Enterprise (AME) area for the Digital Manufacturing and Design Innovation Institute (DMDII), one of the nation’s first, ManufacturingUSA Institutes.

In addition to her academic roles, Terpenny  served as program director for the Division of Undergraduate Education at the National Science Foundation, and as a systems analyst for the General Electric Company.

Terpenny earned her bachelor’s in mathematical sciences (applied math) from Virginia Commonwealth University in 1979 and her master’s and doctorate in industrial and systems engineering from Virginia Polytechnic Institute and State University (Virginia Tech) in 1981 and 1996, respectively.

Terpenny’s awards include distinguished alumni honors from Virginia Tech, being named a fellow of both the American Society of Mechanical Engineers (ASME) and the Institute of Industrial and Systems Engineers (IISE), and several honors for best paper, presentation, educator, researcher and outreach.

She is dedicated to diversity and inclusion, having served as an NSF Advance Professor and leadership team at Virginia Tech, chair of the Broadening Participation Committee for the Division of Design for ASME, on the Diversity Committee of the

ASEE Engineering Deans Council, and multiple diversity initiatives at the University of Tennessee.