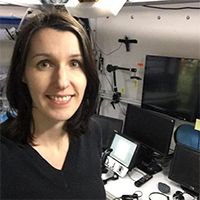 As a kid, what did you want to be when you “grew up”?
A policewoman, then a pilot, and then an astronaut. I am still actively working on that last one despite two rejections. Getting a pilot's license was out of reach financially, so I picked engineering instead and it’s a good fit. If it’d known that designing Lego models is an actual job, I think that would have been a career aspiration too.

How far can YOU see?
In 10 years, I would like the number of people who have seen the Earth from orbit to have more than doubled (or gone exponential), and that the value of aerospace and associated sciences is well promoted and accepted for all the benefits it brings us in daily life while still exploring the universe. In 20 years, I would like there to be a new designation beyond astronaut – space pioneer or similar, because we have established small colonies on the moon as staging for the same on Mars.

One insightful fact you want everyone to know: Getting your hands dirty and crawling around a vehicle is the best way to learn and translate a new concept into reality. Why? Because design is all about iterating on a good idea or finding out that the idea on paper doesn’t translate to the end user taking you back to the drawing board. Professionally speaking, nothing beats physically seeing a product you’ve designed product built, tested, refined then used in service.