How Do Airplanes Fly?

Airplanes – from airliners to fighter jets and just about everything in between – are such a normal part of life in the 21st century that we take them for granted. Yet even today, over a century after the Wright Brothers’ first flights, many people don’t know the science of how airplanes fly. It’s simple, really – it’s all about managing airflow and using something called Bernoulli’s principle.

Do you know what part of an airplane lets it fly? The answer is the wings. As air flows over the wings, it pulls the whole airplane upward. This may sound strange, but think of the way the sail on a sailboat catches the wind to move the boat forward. The way an airplane wing works is not so different.

Airplane wings have a special shape which you can see by looking at it from the side; this shape is called an airfoil. The airfoil creates high-pressure air underneath the wing and low-pressure air above the wing; this is like blowing on the bottom of the wing and sucking upwards on the top of the wing at the same time. As long as there is air flowing over the wings, they produce lift which can hold the airplane up. 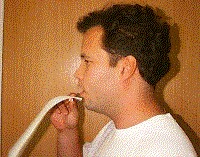 You can have your students demonstrate this idea (called Bernoulli’s Principle) using nothing more than a sheet of paper and your mouth. Cut a long strip of paper between 1 and 3 inches wide. Now hold it just below your lips by the corners of one short edge so that the end close to your mouth is horizontal and the rest hangs down in front of you. Then purse your lips and blow a steady stream of air straight out over the top of the piece of paper. You should see the strip of paper flap upwards as you blow and fall down again when you stop. This is Bernoulli’s principle in action! To make the activity more fun, you could cut out masks with open mouths and tape the paper strip on so that it forms a long tongue which flaps up and down.

Airplanes fly by generating lift using a scientific law called Bernoulli’s Principle. Bernoulli was an 18th-century Swiss scientist who determined that as a stream of air speeds up, its pressure drops. Pressure is a way of describing how much the air is pushing or pulling on something – so, a fast stream of air moving past something will tend to push it less than a slower stream of air.

Airplanes use Bernoulli’s principle to produce an upward force called lift. Airplane wings have a very special shape called an airfoil. If you were to cut through an airplane’s wing from front to back and look at the cross section, this is what you would see: an airfoil. 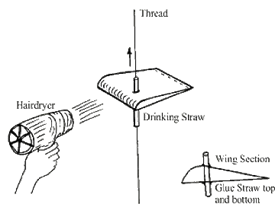 What makes the airfoil special? Airfoils generate lift as air flows over them. Because of their shape, air flows much more quickly around the top than around the bottom. Due to Bernoulli’s principle, the slower air pushes harder on the bottom than the faster air on the top. Since there is more force on the bottom than the top, the wing is pushed upwards. You can construct a simple airfoil demonstration using some construction paper, a string, and a straw (see image). Pay careful attention to the airfoil shape; try to match the wing section shown (flat bottom, rounded front, pointy rear). Blowing over the airfoil with a blow-dryer (or your mouth) will produce lift, making it rise up on the string. Experiment with your students to see the effect of how faster and slower airflows.

Airplanes use Bernoulli’s principle to produce lift. What is Bernoulli’s principle? Simply put, it states that a faster-moving fluid (i.e. liquid or gas) will have a lower static pressure. This means that an object in a fast-moving fluid will feel less force perpendicular to the flow than a slow-moving object (it is important to note that the object will feel more force parallel to the fluid because the fluid motion creates dynamic pressure, but that does not concern us. More detail can be found in the Grades 9-12 section below). Bernoulli’s principle may sound a little confusing, but it’s something we encounter every day. For example, have you ever turned on your shower and had the curtain swing inward? Maybe it seemed mysterious at the time, but this is Bernoulli’s principle in action – the moving water (and air) inside the shower create a lower pressure which “sucks” the curtain inwards.

Believe it or not, airplane wings work on the same basic principle as your shower curtain! Wings all have a similar cross-sectional shape (that is, the shape you would see if you were to cut a “slice” of an airplane wing) called an airfoil.

Look at the shape of an airfoil (click the image for a larger version. Do you think that air flows more quickly around the top or the bottom? You might be surprised to find that air flows much more quickly over the top than around the bottom, but it does, and here’s why. Think of a garden hose – if you want to make the water shoot really far, you can put your thumb over the end – in other words, you force the water through a smaller hole to make it go more quickly. Take another look at the lines surrounding the airfoil shape – these are called streamlines, and they show engineers how air is flowing over the airfoil – the airflow is basically following these lines. Look at the top of the wing – do you see how bunched-up the streamlines are? The air here gets forced through a smaller space, just like the water in a garden hose – with the garden hose, you are making a smaller space by putting your thumb on the end; with the airfoil, air flowing over the top is forced through the narrowing space between streamlines. This makes it speed up more than the air on the bottom, where the streamlines are farther apart. If this is hard to visualize, look at this animation, where you can actually see the difference in speed.

One common misconception is that air flows more quickly over the top of the wing because it has to travel further to meet up with air flowing underneath the bottom. Since it travels further in the same amount of time, it must be going faster. While it might sound reasonable, this explanation is wrong! In reality, the air from the upper and lower surfaces does not “meet” up at the back of the wing – the air going over the top arrives at the back of the wing much more quickly than the bottom, so the air is effectively split in half. This great video from renowned University of Cambridge aerodynamicist Holger Babinsky illustrates this excellently.

So what does this all mean? It means that if you add up static pressure, dynamic pressure, and potential energy at any point in an airflow, the answer will be constant. This might sound confusing, but it is really just a special form of something with which you are probably familiar – the conservation of energy! Static pressure is like an internal energy, dynamic pressure is like a kinetic energy (it even has the same form – ½mv2), and as we discussed, the potential energy is the same (mgh). So Bernoulli’s principle tells us something we already know – that energy should always be conserved!

For an airplane’s wings, the changes in potential energy are very small, because air flowing over the wing does not get much higher or lower above the ground. If we ignore potential energy (it is usually much smaller than the other two terms on that side of the equation), Bernoulli’s equation looks like this:

Think of a stream of air flowing around a wing. If the velocity increases, we know that the dynamic pressure will increase, so to balance it out according to Bernoulli’s equation, the static pressure must decrease (internal energy is converted to kinetic energy). Airplane wings manipulate this fact to create lift. Wings have a special cross-sectional shape called an airfoil. When air flows around an airfoil, it goes much more quickly around the top than around the bottom. Why is that? You can see a simple explanation in the Grades 6-8 section, but the scientific reason is simple as well – it’s all because of the conservation of mass! At low speeds, the amount of mass in any given “chunk” (volume) of air will always be the same. The amount of air flowing through a given space is equal to the density times the velocity times the cross-sectional area – if this doesn’t click, examine the units and you will see that they are in units of mass per unit time. Now, if the same “chunk” of air flows through two sections, the mass flow must be equal and so ρv1A1= ρv2A2. As long as density stays the same, it cancels out and we find that v1A1= v2A2 = constant. What does this tell us? It tells us that if the cross-sectional area of a flow decreases, the air must speed up in that section. This is how nozzles work – think of a squirt gun, where water is forced down a tube and through a small nozzle at the end. This is pretty similar to how air flows over an airfoil – air flowing over the top is bunched together as the airfoil pushes it out of the way, while air on the bottom flows by without being affected as much (see the picture in Grades 6-8 section). Since the air over the top of the wing is constricted, it speeds up and - according to Bernoulli’s principle – the static pressure drops. Since the pressure on top of the wing is lower than on the bottom, the wing is pushed up from the bottom by air pressure – and voila! We have lift!

By the time they reach high school, many students may have heard the erroneous explanation that air flowing over the top of the wing accelerates because it has a longer distance to travel. You may find it worthwhile to explain that this is false notion – the real explanation is the conservation of mass principle outlined above. Airflows over the top and bottom surfaces of the wing do not “meet up” at the rear of the wing as you might imagine – look at renowned University of Cambridge aerodynamicist Holger Babinsky’s great video of air flowing over a wing for a very clear illustration of this.