How High is it?

There are several different ways to figure out how high something is.  If it is short enough for you to reach it, you can hang a measuring tape from it and measure it that way.

Another way to measure the height of something is to set up something shorter next to it, something whose height you know.  If they are outside in the sunlight, you can see how long the shadows are that they cast.  With some elementary arithmetic (which you will learn in a couple of grades) you can use the lengths of the shadows to figure out how tall the object is. 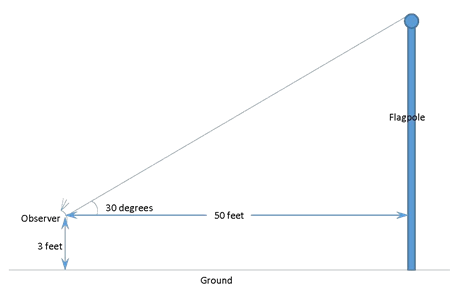 In the diagram, the diagonal line measures four inches horizontally and two and a third inches vertically.  One can use a ratio to calculate the height of the flagpole in real life:

Multiplying the ratio out gives

The basic shape of the Earth is an ellipsoid:  a cross-section through the Equator (or a line of latitude) is a circle and a cross-section through a line of longitude is an ellipse.  The elliptical shape results from the rotation of the Earth and is changed from a circle by about 0.3 percent, or one part in three hundred.  This is not noticeable to the unaided eye.  (The planets Jupiter and especially Saturn, in contrast, rotate more than twice as quickly as the Earth and have visibly elliptical shapes.)

The ellipsoidal shape of the earth complicates the question of defining a zero altitude.  If a person starts at zero altitude on the Equator and goes to the North Pole, moving neither up nor down in altitude, one moves about 13 miles closer to the center of the Earth.  (For comparison, Mount Everest is less than six miles high.)  Zero altitude cannot be defined as being a constant distance from the Earth’s center, then.  Instead, zero altitude is often considered as the Mean Sea Level. Mean Sea Level is the level of the oceans when the effects of tides, currents, winds, and waves are removed.  It can never be measured directly but must be calculated by averaging (hence the term “mean”) many thousands of observations of individual sea levels.

The ellipticity of the Earth is not the only complication in defining zero altitude.  Mountains have mass; their mass exerts a gravitational force; this gravitational force distorts which direction is “up.”  If one moves westward (along a line of constant latitude, supposedly circular in shape) in Colorado towards the Rocky Mountains, for example, even if one is not moving sensibly “up” or “down” one is getting farther from the center of the Earth.  In the other direction, a trench in the ocean is filled with water which is less dense than the rock that is underneath the ocean around it.  Because the water is less dense, its gravitational force is less, and the rock beside the trench pulls the water away from the trench itself. The sea level above an oceanic trench can be as much as 65 feet lower than the sea level above the ocean of average depth.

There is an entire science called “geodesy” which is devoted to measuring and calculating the shape of the Earth.  Geodetic scientists have defined the shape of the Earth, which is called the “geoid,” using sines and cosines of the latitude and longitude to a precision of about 30 miles, or half a degree of latitude (and of longitude at the Equator).  This definition requires a total of 130,317 coefficients in their equation that defines the shape of the Earth; this equation gives the distance of the geoid above the average ellipsoidal shape of the Earth at any latitude and longitude. As such, there are two ways to express the altitude of any point on the Earth’s surface.  One can give a number as the “height above the ellipsoid” (abbreviated “HAE”), which gives the distance of the point above the Earth’s ellipsoidal shape.  More commonly, one can give the height above Mean Sea Level (abbreviated “MSL”), which is the same as the height above the geoid.

When something is above or below the surface of the Earth, there is a third way to express its altitude.  There are the HAE and MSL altitudes; in addition, there is the object’s altitude above ground level, abbreviated “AGL.”  When one is flying an airplane it is important to keep the altitude AGL greater than zero.

If one asks how high a mountain is, one must define one’s terms carefully. The highest mountain in the world is Mount Everest, whose altitude is 29,029 feet (8,848 meters) above Mean Sea Level.  (It should be noted that this figure is not as accurate as it looks, in part because of defining “Mean Sea Level” at the Himalayan Plateau.)  The tallest mountain in the world is Mauna Kea in Hawaii, which extends vertically 33,465 feet (10,200 meters) from its base on the floor of the Pacific Ocean to its peak on the Big Island of Hawaii.  The point on the surface of the Earth that is farthest from its center is the peak of Mount Chimborazo in Ecuador, even though its height is “only” 20,703 feet (6,310 meters) above Mean Sea Level.

There are other types of altitude that motivated students can look up.  “Pressure altitude” relates to atmospheric pressure and varies with the weather.  “Geopotential altitude” adjusts for the lessening of the Earth’s gravity as the altitude increases.  The question of defining a zero point on the moon or Mars, where there is no sea and therefore no Mean Sea Level, opens an entirely different can of worms.  On Mars, the zero altitude was specified arbitrarily as the altitude at which the atmospheric pressure is 610.5 Pascals, which is the pressure of the triple point of water.

November 1956:  The Americans launched twelve sounding rockets, eleven successfully, to study the upper atmosphere and to test re-entry vehicle technology.  A sounding rocket simply goes up and comes down; it does not orbit the Earth or even necessarily go into space.