In commemoration of the fiftieth anniversary of Soviet cosmonaut Yuri Gagarin’s pioneering trip into space, the United Nations in 2011 named April 12 to be the “ International Day of Human Space Flight.”  The observance started in the Soviet Union as “Cosmonautics Day” in 1962.  This expanded around the world to “ Yuri’s Night,” which was established in 2001 as a time for promoting public interest in space exploration.  The International Day of Human Space Flight is now six years old.

NGSS: Earth’s Systems: Construct an argument supported by evidence for how plants and animals (including humans) can change the environment to meet their needs. 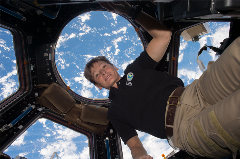 Space is a very difficult place for people to live.  To begin with, not only do astronauts need to bring their own food and drink to live off, they need to bring their own air to breathe.  After one takes care of those basic things, other activities like brushing one’s teeth or taking a shower are very difficult.  Taking a bath is out of the question; without gravity to hold the water down in the tub, the water would splash all over the place if the astronaut tried to get into it.

Even with all the difficulties, astronauts still go into space.  Since the earliest written records, humans have been inspired to try to fly, to reach the sky and even go beyond it to the stars.  Myths like that of Daedalus and Icarus, Leonardo da Vinci’s sketches and models, Otto Lilienthal’s gliders, and the Wright brothers’ airplane all led up to the time when mankind would leave Earth and travel through space.  We go because we are curious, because we want to know more about everything around us, and because we learn so much along the way.

Suggested Activity:  Have students create “astronaut food” by mixing instant pudding or instant oatmeal with water in a sealable sandwich bag.  Snip a corner of the bag for them to experience eating food like early astronauts did (i.e. squeezing it from a tube).  NASA has an excellent web page on Space Food with information and video links.

If class size, teacher or volunteer strength, and other factors permit, it may be fun to have the kids try to wash their hands while being held sideways or upside down.  (This will probably evoke much merriment as well as being instructive.)

NGSS: Engineering Design: Define a simple design problem reflecting a need or a want that includes specified criteria for success and constraints on materials, time, or cost.

All the difficulties of getting into space and living there have not stopped people and nations from trying and succeeding.  The United States, Russia (and before it the Soviet Union), and China all have manned space programs, which are projects to send people into space.  While the word “astronaut” is the standard term for a person who has flown in space or is preparing to do so, the Russians call their astronauts “cosmonauts” and the Chinese call theirs “taikonauts.”  People from 37 countries in all have flown into space on American, Russian, or Chinese rockets.

Here are some “firsts” in human space flight.

The International Day of Human Space Flight is promoted by the United Nations as a way to commemorate what people have done in space.  People do things to recognize how having people in space has affected our lives and to promote the peaceful use of outer space.  There is another web site which has space-themed quizzes and word search puzzles to observe the day.

NGSS: Earth’s Place in the Universe: Develop and use a model to describe the role of gravity in the motions within galaxies and the solar system.

The space environment is very hard on the human body, even inside a spacecraft which supplies the basic needs of enough air at a good temperature and pressure.  The human body was designed to live with gravity pulling it down and ground holding it up.  Without the weight—not mass, but weight—of the body to push against, the muscles in the legs will weaken and the bones will soften.  In order to prevent this from happening, astronauts on the Space Station follow a strict program of exercises, including running on a treadmill with elastic straps to hold the astronaut in place.

Another way to simulate the effects of gravity is to make all or part of the spacecraft spin.  The centripetal force caused by the spin of the spacecraft mimics the pull of gravity.  This is often shown in science fiction movies that are set in the near future.  Real spacecraft do not use this method because the spacecraft needs to be quite large for the method to work well.  The video “Can We Create Artificial Gravity?” explores some of the limitations that are currently preventing the use of spinning spacecraft or space stations.

Suggested Activity:  Fill a small bucket halfway with water.  Have one or more kids spin around with the bucket held out at arm’s length.  (It is recommended that this be an outdoor activity.)  Point out that when the bucket is spinning like that, the centripetal force is acting like its own “gravity” that adds to the regular gravity that pulls down.  If you feel adventurous, you can swing the bucket around in a vertical circle and point out that the water does not fall out even when the bucket is upside down at the top of the arc.

People often compare the development of spaceflight with the development of the train, the car, and the airplane and lament how slowly spaceflight is advancing.  The first car powered by an internal combustion engine was built in 1876; fifteen years later, in 1891, the Peugeot company was producing cars commercially.  Twenty-two years after that, the Ford Motor Company was producing the Model T for the general public on its assembly line.  The first mobile steam engine was built around 1784; the Oystermouth Railway began carrying passengers in 1807.  The Wright brothers made the first successful powered airplane flight in December 1903; regional airlines were operating twenty years later.  In contrast, the first person flew into space in 1961 and the first non-specialist did not fly into space until 2001, forty years later.  The first commercial passenger spacecraft have not been developed yet.

A better analogy to human spaceflight is the exploration of the New World by Europeans.  Leaving aside the activities of the Vikings centuries earlier, the first contact Europeans had with the New World was Columbus’ voyage in 1492.  There followed individual outposts, mostly in the West Indies and Central America, but large-scale self-sustaining settlements did not appear for several decades.  The first European settlement in North America after Columbus was the Spanish settlement in Pensacola which was founded in 1559—more than sixty years after Columbus’ voyage—and it did not survive.  Just as in space travel, if something went wrong in one of these settlements, help was far away.  The settlers had to plan ahead to be self-sufficient, packing all the supplies they thought would be needed for any situation, much like astronauts do today.  At least early settlers did not have to carry their own oxygen!

Suggested Activity:  Watch the “ docking sequence” from the movie “ 2001:  A Space Odyssey.”  (The music, if anybody asks, is Johann Strauss’ waltz “The Blue Danube.”)  This scene is what people in 1967 thought space flight would look like in the year 1999.  Discuss with the students why the reality turned out to be much less spectacular.  As with most questions of history, there are many reasons.

April 11, 1957:  The United States Navy launched a Vanguard rocket to an altitude of 126 miles, the first launch outside the atmosphere.  It carried instruments to measure air pressure, air temperature, meteoric dust, and cosmic rays.